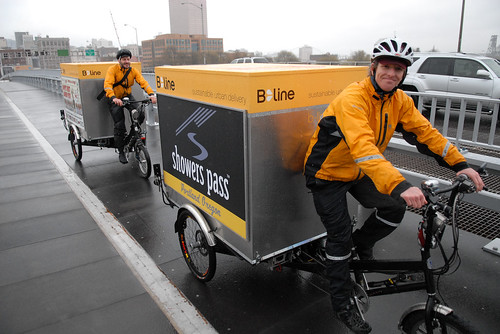 Portland’s biggest trike-based urban cargo company is about to get bigger.


“You don’t want to be on the streets delivering product, you want to be in the office building your business. That’s where we come in.”
— Franklin Jones, B-Line

As part of a partnership with the nonprofit conservation group Ecotrust, B-Line Sustainable Urban Delivery will move into a renovated building in Portland’s industrial inner east side that will be filled with people bringing local agricultural products to market.

In addition to serving its fellow tenants at Ecotrust’s new two-building campus, the move will let B-Line add two to four new trikes to its fleet and expand its overall delivery capacity by 25 percent.

“Our role is to kind of step in as a logistics provider for that campus,” said Franklin Jones, B-Line’s founder and CEO, in an interview Tuesday. “Also, that’ll allow us to provide more of a role as an aggregator and consolidator in the Central Eastside, thereby reducing more vehicle trips. … Once those products are dropped off, we’re kind of able to consolidate products across industries and combine them into one trike-load into the downtown core.”

Jones said the new setup will improve B-Line’s ability to bring products to the New Seasons grocery chain, which has its main kitchen in the Central Eastside and contracts with B-Line for some of its product deliveries. He said B-Line has found a niche serving small companies that have outgrown directly delivering their own products to stores but aren’t yet big enough to sign on with a large distributor.

“This new facility is going to enable us to offer a greater capacity not only to New Seasons directly but also to the vendors who may be selling into New Seasons,” Jones said. “Let’s say you’re a hot sauce guy and your product is starting to take off. You’re working out of your garage and you don’t have any storage capability. You don’t want to be on the streets delivering product, you want to be in the office building your business. That’s where we come in.”

“We’re able to extend the runway before they have to go into one of these primary distributors,” Jones went on. “If we can get that runway a little bit longer, there’s going to be more value back to the producer. It ultimately gets back to the ranchers, the fishermen, the farmers, the growers.”

Franklin Jones’s vision is a beautiful thing! I can’t help wondering if B-Line’s growing success will help accelerate better bike infra in the city. After all, it’s a Freight Interest, right?

That’s brilliant! If B-Line doesn’t already have a seat at that policy-setting table, they should get on that.

Way to go Franklin! Kudos to Ecotrust. This is great news for Portland.

They continue to demonstrate for the rest of the country the viability of moving toward sustainable transport in such a big way [= zero fossil fuels].

Buying carbon credits so you can claim carbon-neutrality? Not so much.

Sure biking stuff around here is great and all, but lets not forget the polluting cargo ships that bring this stuff over from China.

lol that billboard looks like they are hauling Showers Pass…which is made in China isn’t it? Or Vietnam?

Safeway brand apple juice gave me the skitters something fierce. Read the label and what do you know “Concentrate from China”

Never again with the Safeway brand. Cheap food has a cost (or many)

Middle of the Road guy
Reply to  Granpa

Well if I need to do a colon cleanse, I know what to use!

B-line is one of the most exciting things happening in Portland now!

Thanks SD. Lot’s of excitement in town now so that’s a nice shout out.

How soon until they are self driving? Would be much safer.