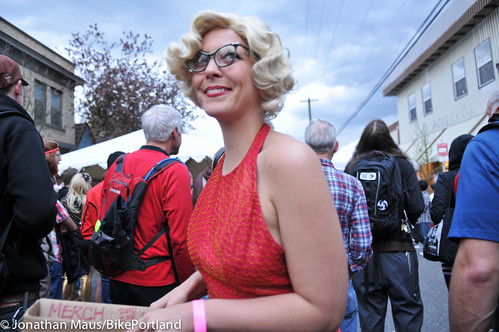 Welcome to your menu of weekend rides and events, lovingly brought to you by our friends at Hopworks Urban Brewery.

It’s quite a weekend ahead. The Naito Pilot Project opens up at rush-hour tomorrow and Filmed By Bike takes over the Hollywood area all weekend long. And for many Portlanders (including me!), Friday morning is the start of the grueling Oregon Outback, a 360+ mile ride (75% dirt) from Klamath Falls to the Columbia River.

Whatever is in your plans, have fun and enjoy the weekend.

Filmed by Bike New Belgium Street Party – 5 to 9:30 pm at Velo Cult (1969 NE 42nd Ave)
This is the annual free, all-ages, super-fun kickoff to Filmed by Bike! The festival runs all weekend and what better way to start things off than a big party just a few blocks from the Hollywood Theater were all the magic happens. Expect live music, dancing, Sprockettes performance, and more! More info here.

Filmed By Bike – 7:00 pm & 9:00 pm at The Hollywood Theater (4122 NE Sandy Blvd)
Two big showings on opening night, both of which include the infamous prize raffle with tons of great stuff to win. More info here.

Human Powered Challenge – All weekend at Portland International Raceway north of Kenton
The Oregon Human Powered Vehicle Association puts on two full days of races that feature some of the coolest — and fastest! — two wheeled machines (a.k.a. recumbents) you’ll ever see. Compete or just come out and soak in the festival atmosphere of this fun event. More info here.

Filmed By Bike – 5:00 pm at The Hollywood Theater (4122 NE Sandy Blvd)
A special showing of “Half the Road: the Passion, Pitfalls and Power of Women in Professional Cycling” followed by a panel discussion at Velo Cult about women who race bikes. More info here.

Filmed By Bike – 7:00 pm at The Hollywood Theater (4122 NE Sandy Blvd)
It’s Adventure Night, a collection of films that will stoke your wanderlust. Followed by the festival awards ceremony. More info here.

Slow Ride – 11:00 am at SE Clinton and 12th
Part of the Clinton Neighborhood Greenway’s 30th birthday celebration, this ride will literally stop and smell the roses. “Lollygagging and rubbernecking highly encouraged,” say the organizers. Expect a much different experience than the hectic commute! More info here.

Filmed by Bike – 5:00 pm at The Hollywood Theater (4122 NE Sandy Blvd)
Final and full day of this year’s fest. VIP screenings, a ride with the filmmakers, and a filmmaker Q&A are all in the lineup. Full schedule here.

— Did we miss anything? Let us know via the comments and make sure to drop us a line if you have an upcoming event you’d like us to feature next week.

No mention of the OHPV Human Powered Challenge at PIR?

I didn’t forget that event. Was just a code typo that messed up the display of the post! I think I fixed it and the HPV and all the other Saturday events are showing now.

I’m excited that Filmed by Bike is at the Hollywood this year, but also very disappointed that the short film programs are only shown once all weekend.

Hi Mark – there are FOUR programs of shorts for your bike movie delight!

You can see the entire schedule here:
http://filmedbybike.org/fest-schedule/

Wow…Filmed By Bike is leaving the nest and not playing at the Clinton?!

Jonathan, which bike are you riding on that 360 mile gravel expedition? Your green Salsa? Sorry to ask, but I’m in the market and collecting as many opinions as possible before I lay down the cash for an off-road bike.
Thanks

Yep.. Taking the Salsa Vaya, expertly built up by the crew at 21st Avenue Bicycles.

Don’t forget: the printed calendar deadline for Pedalpalooza events is midnight tonight (Thursday). Events posted after that miiiight get in but no guarantees! http://pedalpalooza.org

There is a box of bike parts in my garage that may be useful to someone. I will bring them to Endurance Center as a donation to the cause. It is a tragedy that Alistair got so brutally hit by that truck.