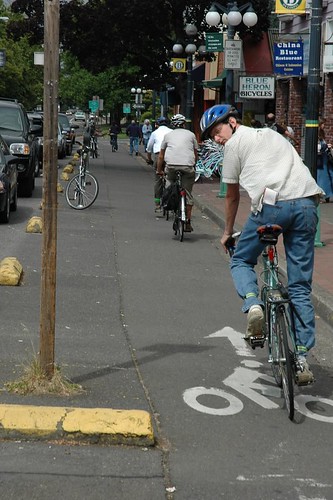 Where you at Portland?
(Photo J. Maus/BikePortland)

The Oregon Department of Transportation just announced that the City of Eugene has been awarded a $909,066 grant for its bike share project. That means bikes could be on the ground and rolling in about a year, according to the city’s Transportation Planning Manager Rob Inerfeld.

The grant comes from the Connect Oregon, a Lottery-backed program dedicated solely to “non-highway projects.” This was the first cycle of the grants that where biking and walking projects were eligible to compete for the funds.

This grant will pay for nearly all of Eugene’s bike share project, which has a total cost of $1,136,333. The remainder of the needed funds will be paid for through urban renewal dollars the city has already committed to. Once up and running the entire system will have 28 stations and and 210 bikes, which includes integration with a four station, 40-bike system already up and running that is planned at University of Oregon.

Here’s more about the system from the official project description:

“The City is committed to making this system a success and will provide a match of about $227,000 from the Riverfront Urban Renewal District. Bike sharing is an innovative transportation program, ideal for short distance point-to-point trips providing users the ability to pick up a bicycle at any self-serve bike-station and return it to any other bike station located within the system’s service area. Eugene’s downtown area has the density, existing bicycle and transit infrastructure, and public support needed to launch a successful bike share system. The bike share will create efficient connections between transit stations, commercial districts, close-in residential neighborhoods, and the UO and reap the economic, environmental, social, and health benefits that bike share has to offer. By providing an integrated bike share system throughout downtown Eugene and the UO, the City will be expanding on a convenient transportation option in bicycling that is already a widely used mode in the community.

The bike share system will increase mobility options for short trips of less than 2 miles, and provide an active transportation option for the first and last-mile of transit trips. In addition, a bike share program will cost-effectively relieve pressure on the transit system between downtown and the UO, which is currently at overcapacity during peak hours. Bike share systems are very scalable and the prices go up, the number of bikes or stations can be adjusted.” 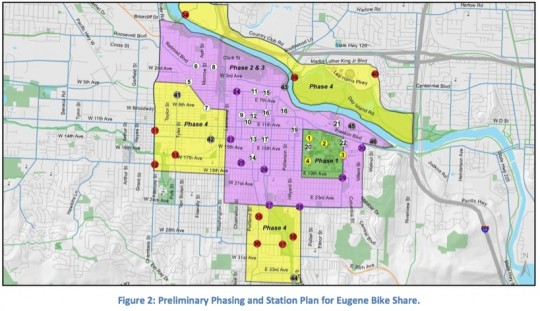 As we reported back in January, Eugene is really lucky to have even been considered for this grant. After awarding $42 million in project grants back in June, the Oregon Transportation Commission gave applicants a second-chance due to some unallocated funds that popped up.

Inerfeld told us back in January that he thinks bike share will help boost the local economy and give the city an identity as an attractive place to live.

Reached today in his office, Inerfeld shared that their next step will be to contract with a consultant to help track down potential sponsors. This grant gets the bikes and stations on the ground, but the city will need to find more revenue for the ongoing maintenance and operation of the system.

Inerfeld said he sees the system as a citywide asset and he’s already engaged in talks with University of Oregon and the Lane Transit District to find a funding strategy. Another step the city will now take is to decide whether or not to have a non-profit run the system. That was a recommendation given to them by Toole Design Group, the firm that completed their bike share feasibility study.

As to the type of bikes Eugene will use, that too is up in the air. Inerfeld said they’ll put out a new RFP to find an equipment provider. He said they’ll take a close look at the more traditional fixed-station systems used in large systems like Citibike in New York City and Capital Bikeshare in D.C., or new, untethered systems like Social Bicycles.

Portland meanwhile still doesn’t have a bike share system — despite years of planning and false starts. PBOT staffers still say they are committed to the project and we’ve heard a date of 2016, but at this point not many people around here are holding their breath.

It seems many of our local politicians are only progressive at face value, while pandering to the rich and business elites behind closed doors. This is why we hear stuff about back to basics– you may think filling potholes is going to help bikers, but it’s really a tactic to prioritize autos over everything else. Look how far we’re lagging on a bike share. Look how long it takes to get any infrastructure implemented. If this were for cars, we’d find a way to push it. However, we end up with endless discussions about removing parking on 28th that just het stalled– these “talks” are designed to attract nay-sayers.

If this city’s leadership really supported multimodal transportation, we’d be moving forward with a wide vision. Instead we have Charlie “think of the potholes” Hales. He even claims this is a more important issue than affordable housing. It’s all about slowly devolving the activism of portland into a burnt out bedroom community, like SF. It’s trojan horse conservatism.

Andyc of Linnton
Reply to  Jeg

This mentality is why we can’t ever seem to reach big-ticket things like bikeshare and protected bike lanes. Spend spend spend….can’t say no to spending on anything because moral outrage.

Hales’s prioritizing basic maintainence over stuff like affordable housing is just financial reality and acknowledging finite resources. It’s a painful reality. Your attitude is not unlike a someone deciding to spend their entire tax return, because they NEED that new Mountain Hardware jacket, when they have zero savings and an large credit card debt.

PS. The photo of Evan in Eugene is pretty dated since that stretch of street has been redesigned…vs. the 1970s bikeway shown.

Hahaha! Alabama is probably going to recognize marriage equality before we get bike share.

Ironically, or disturbingly, Eugene redesigned 13th to eliminate the physically separated cycletrack shown in the picture. The heavily used European-style bikeway from the 1970s was removed to make room for car parking. Now there’s a bike lane with cars backing up into it.

The city has, however, made big improvements on other streets, and the bike share is great.

This block of 13th has the highest walking volumes in the city and the eastbound bike lane that was removed was a door zone bike lane. When we rebuilt the street, we converted from parallel parking on both sides to back in angled parking on side and widened the sidewalks by 5 feet.