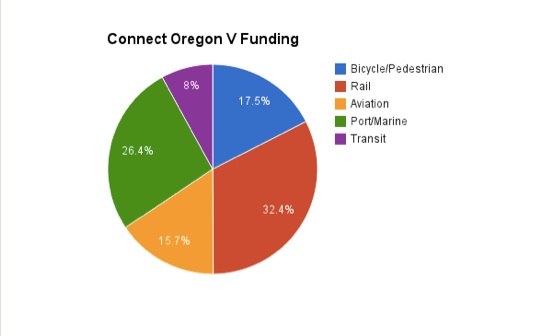 Advocates from the Bicycle Transportation Alliance fought to change state law in order to have a shot at a piece of this pie. And now we’re all reaping rewards as the final recommended list includes over $8 million in projects that will improve bicycling and walking.

In total, 37 (out of 104) projects have been selected for funding. The largest award, $6 million, would go to the Port of Morrow for a cold storage rail facility and the smallest award, $16,000 would go toward an airport master plan for the Grant County Regional Airport.

On the bike-specific side of things, the big selection was the Tualatin River Greenway Gap Completion project which is slated for $1.6 million. That project will fill a 0.77 mile gap between Nyberg Lane and Martinazzi Avenue. According to the ODOT project summary, it will link 67,000 nearby residents to jobs and retail and “provide safe and convenient multimodal access across I-5, a route for which no safe connection currently exists.”

TriMet won $1.5 million for their Westside Bike & Rides: Access to Jobs project, which is a package of “last mile” access improvements at the Beaverton Creek and Goose Hollow MAX stations. Project Manager Jeff Owen says, “This project will build enhanced bike parking at Goose Hollow and Beaverton Creek, along with a new trail connection at Beaverton Creek that would facilitate connections on the north side of the light rail tracks to future trails by Tualatin Hills Parks and Recreation District and Nike.” Matching funds for the $6 million will come from Washington County.

One project that didn’t get funded was PBOT’s Portland Bike Share Phase II. That’s because the application was pulled by PBOT at the last minute, due to what they characterize as unforeseen delays in the Bike Share project.

The Connect Oregon program funding is dedicated solely to projects that are not on public highway rights of way. Other categories of projects that were in the running for the money included port/marine, aviation, rail, and transit.

As this process got underway late last year there was some consternation among active transportation insiders that even though the projects were eligible in the program, they wouldn’t be able to compete head-to-head with the entrenched political power behind rail, marine, aviation, and other “off-highway” interests. Those concerns now appear to have given way to confidence for the next round. One source said the bike/ped category was only expected to get about $2 million of the $42 million.

Besides the initial heavy lifting by BTA Advocacy Director Gerik Kransky, two key advocates on the Oregon Bicycle and Pedestrian Advisory Committee (OBPAC) — Susan Peithman and (2014 Alice Award Winner) Jenna Stanke — represented biking and walking projects at the final selection committee meeting yesterday. “They did a great job of advocating and negotiating for bike ped funding among a powerful group of people,” commented an ODOT source via email this afternoon.

There’s still one last hurdle for these projects (although its likely to be smooth sailing): This recommended list now goes to the Oregon Transportation Commission where there will be a public hearing in Salem on July 17th and a final decision made in August.

See the full list of funded projects via this PDF.

— Learn more about Connect Oregon in our archives.

UPDATE: Here’s the BTA’s blog post about the news.

I also notice that the Port of Saint Helen’s (still region 1) is recommended to get $4 million. This is being used to upgrade their docks for Coal and Oil exportation.

Yet, there is several million worth of other worthy trail projects in the region that did not qualify. So much for our statewide commitment to carbon reduction. Big Labor beats multi-modal conductivity and the environment. Our democratic leaders speak out of both sides of their mouth.

Chris I
Reply to  Terry D

This is outrageous. If the exporting business is profitable, the railroads should be able to pay for infrastructure upgrades (on their private property) with profits from shipping fees. If this doesn’t pencil out, then the project should not happen. This project does not benefit the vast majority of Oregonians, and our tax dollars should not be spent on it.

Oregon Mamacita
Reply to  Chris I

What kind of self-destructive dummies would sell coal to China knowing that the pollution comes right back at us? Leave it in the ground.

We need to re-visit what happened with PBOT & the Cover Oregon grant.
The grant was pulled one day after the Mercury published an interview with Kaiser in which the representative from Kaiser refused to support
PBOT’s story that a mysterious sponsor had “committed” funds. The fact remains that Mr. Novick chose to portray the security of the sponsorship deal in a false light. Based on the reporting, it is clear that PBOT chose to make false statements and then to stand behind those false statements for six months. Bixi’s bankruptcy didn’t cause Kaiser to walk away- Kaiser
never made the deal in the first place.

What does this say about ODOT? Well, it shows that the grant process
has a farcical element because a falsified grant application made it to the number four spot in a field of 26 grant applications. ODOT can’t “vet” grants.

Who among the bike advocates stood up for basic fairness and truth?

The scandal over the bike share grant isn’t about bike share- it’s about
good gov’t and whether we can trust officials after the newspapers
carefully lay out the case that those officials lied to get tax dollars.

I think you mean SW Nyberg St and Martinazzi, not Nyberg Ln.

Nyberg Ln “T’s” into Nyberg St, which continues across I-5 and runs ino Martinazzi by US Bank and the new Cabela’s.

What about connecting the disparate sections of the Tualatin River Greenway Trail? It’s currently chopped up into sections that are sometimes difficult to connect using surface streets, and could be connected to the existing trail network in Tualatin Park. There’s a dead-end segment behind the Senior Center that could be hooked up once the Himalayan blackberries are hacked away.

the image for this article isn’t working… trying to view it I get:

Yay! Secure bike parking at the last downtown MAX station is exactly what I need in order to not have to drag my bike onto crowded trains in the morning.

Or, even more critically, to not have to drag my bike onto much-more-crowded trains in the afternoon.