Nike’s new corporate bike share system seems to be plenty popular with users of the nearby Beaverton Creek MAX station: 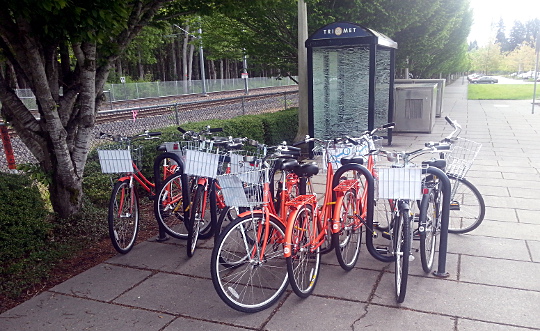 The picture above was taken by a reader, who writes:

Since this program started, that main rack has been totally consumed (pic was taken on a Friday morning 10ish), with evenings so bad that extra orange Nike bikes are either locked to the parking signs or just floating near the rack with front wheel ulocked to the frame.

TriMet spokeswoman Angela Murphy acknowledged the new problem in an email Friday, though she added that it’s “a good problem to have.”

“TriMet is supportive of Nike’s current efforts in promoting bike share as a viable option to make first and last mile connections to transit,” she wrote, informed by a conversation with TriMet active transportation planner Jeff Owen. “We are working together with our partners at Nike to more closely monitor the number of bikes at each MAX light rail station. … We currently have additional bike racks on order, to be delivered in early June, that will provide more bike parking capacity at stations throughout our entire TriMet system, including Beaverton Creek MAX station.” 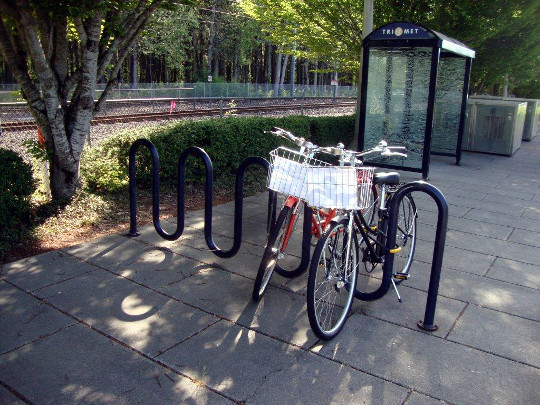 Until more racks are installed, of course, the variability of the supply doesn’t improve things much for users of the system. Nobody gets on a bike-share bike thinking that they hope they’ll get lucky when it comes time to park it. They want the parking to be mostly hassle-free on a reliable basis, or at least for problems to happen at predictable times of day.

As we reported on the site last month, TriMet is also a strong contender for a state grant that would create a (presumably paid) long-term bike parking facility at Beaverton Creek MAX station, plus an easy trail connection to Nike’s main campus. If they secure that grant, there’ll be more places to park a bike at the station — at least for those willing to pay a couple cents per hour for the space.

Also merlo rd. & 158th… I was wondering what those were. They aren’t really locked up all that well.

Could you find a better example of Bike Share’s value when combined with transit? To all those that think bike share would compete with transit- this picture speaks one-thousand words. Solving for the “last mile” is one of a transit planner’s toughest challenges. Bikes excel at those trips that feel just a little too long to walk.

Too bad the plan for the (future?) Portland bike share pretty much ignores public transit.

Bikes parking packed by transit is exactly the right problem to have. It sounds like perhaps Nike needs to do some balancing or active management of the bikes, not just letting the users do it organically, but the problem will be solved by more racks. Visit most European cities and you will see lots of chaotic, improvised bike parking near the train stations: a sign of success!

These pictures illustrate the challenge of actively balancing a bike share system. I’m glad to see that it is being used for trips to and from the Max.

I DO hope that TriMet doesn’t add to the capacity by installing more wave racks. This world would be a better place if no more wave racks are ever installed.

Ten bikes isn’t much of a show of popularity. A hundred, or several hundred bikes would be saying something. Like the number of bikes routinely parked in the parking lot for bikes at the base of the tram in Portland. It’s Nike’s employee bike share system, and accordingly, for the overflow on existing bike racks its’ system is producing, Nike should be providing bike racks for their bikes.

“…Nike’s new corporate bike share system seems to be plenty popular with users of the nearby Beaverton Creek MAX station: …”

…accompanied by a picture of a single Trimet bike rack filled to near capacity, with what looks to be 80 percent of them being Nike bike share bikes. That to me, regardless of how long Nike’s new bike share system has been operational, is not much of an indication that the system is ‘plenty popular’. If it is already plenty popular, and Andersen has some more solid examples than that picture, that illustrate this being the case, he ought to present them if he wants to make the kind of statement he did.

What the picture does show, is that someone involved with developing the Nike campus bike share system may not have well anticipated and prepared for the need for area bike parking facilities the system would produce. Some thoughts from Nike officials about how the company will address possible situations in which their bike share bikes regularly overwhelm Trimet’s customer bike racks, would be welcome.

You say you think: “It’s not perfect. Therefore, it totally sucks.”.

As for myself, I think the system has some potential benefits to offer, both on and off campus, and I’ve said as much in comments to the earlier story about the new system. With this story, there’s various questions and mysteries about the system and how its being managed that deserve answers. I hope we’ll be reading here, how Nike officials respond.

The type of bike rack shown should be made obsolete. I can’t believe they’re still being used. They are worthless if you want to lock your rear wheel unless an end piece is available. Get rid of these dinosaurs.

How much did Nike make last year? and the year before that ? And TriMet is waiting for a grant, of public funds I presume, to add bike parking and improve the path to Nike?
Come on, Nike, show the way, and get it done! We know you fought like hell to avoid becoming “citizens” of Beaverton to avoid their taxes, but come on! Just Do It!

If Nike would pay taxes, maybe Trimet wouldn’t have to hope for a state grant to build facilities for them.

Well, Nike has a deal with the state that would get them off the hook for export taxes should the state ever impose such a tax, and it has another deal that prevents Beaverton from annexing its HQ and charging city taxes on the activity there. Both of those things are pretty unusual. But it doesn’t have anything that gets it out of the regional payroll taxes that fund TriMet.

All the people they employ pay taxes. We need all the jobs we can get in this region…and not just low paying service jobs.

Nike being a big company employing a great number of people that pay taxes to the city from wages Nike pays them, it was able to leverage a no annexation deal with Beaverton that relieved the company itself, of having to pay out a lot of extra money in taxes.

It would seem to logically follow, that in planning its new campus bike share system, the company would think to use some of the money it saved, to plan and provide for sufficient parking for those bikes that wouldn’t unduly burden bike racks Trimet has installed for its customers bikes.

Can one be certain that those bicycles are not used by players at the adjacent cricket pitch?

Another thing for Nike bikeshare users to remember is that the company leases a number of the buildings at the Millikan office park, 3 of which are directly across the empty field from the Beaverton Creek station. Nike workers with the time to walk across the field can also park at those racks instead of leaving the bikes at the MAX station.

Nike ahhhh…. this looks like a park n ride lol why not put more racks on campus? 😉 BTW I noticed this before story hit on BP.

Yesterday, about 5pm, I rode by the Merlo Rd station. There again, the Trimet bike share rack was near full, 8 or so, of Nike bike share bikes.

Question I have, is what exact type of use has brought them there, and for how long. Wondering whether this is day shift workers riding from the campus to the station to go home for the night, leaving the bikes locked there overnight. I’ll guess it’s a 15-20 minute walk from the center of the Nike campus to this station.

That’s exactly what is happening. Sounds like there is an unmet demand for first-mile/last-mile transportation needed to be filled here.

If that truly is what’s happening, I hope Nike’s bike share system staff knows this. The Merlo station is kind of isolated from much activity at night. The bikes could be prey to vandalism, maybe theft.

Also, if many Nike employees are using light rail and getting off at this station, it would make sense for the staff to know how many of them there are, so the company could provide enough bikes and racks for them at this station. With as many people as this one has, hopefully more than 20-30 people are interested in riding the train and using a bike share bike for the last mile or so to work.

This is such a nuisance! Obviously Beaverton or Trimet needs to pass a law making it illegal for Nike employees to lock their bikes to the *public* bike racks. Those aren’t for corporations to take over!

GlowBoy
Reply to  was carless

The bike share system has only been in operation for 17 days. Perhaps give the people running the system a little time to work out the bugs rather than throwing around “corporate takeover” accusations?

They’re hard to miss. I saw one of these bikes at someone’s house. People are riding them home!