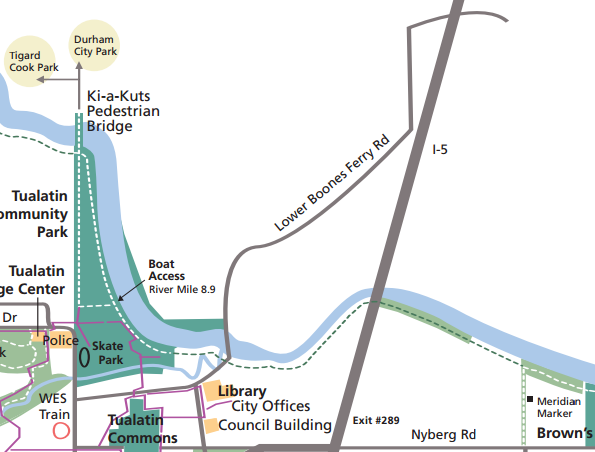 The blue dashed lane along the south bank of the Tualatin River shows a future trail connection that might be funded by $1.6 million in state lottery proceeds.
(Image: City of Tualatin)

A mixed-use path link in Tualatin is among the top contenders for a lottery-funded state grant program that includes biking and walking projects for the first time this year.

The 0.8-mile, Tualatin River Greenway gap completion project is faring well in the state’s competitive Connect Oregon program because it creates a low-stress link to jobs and retail across Interstate 5 for 67,000 nearby residents. It’d cost $3.1 million; Tualatin is hoping half will come from Connect Oregon.

Also performing well in early (and still flexible) rankings for Connect Oregon’s state lottery dollars are the proposed Tigard Street Trail, which would convert an unused rail alignment to a walking/biking path along SW Tigard Street from SW Main Street to SW Tiedeman Avenue, and a TriMet proposal to add secure bike parking and safe track crossings at the Beaverton Creek and Goose Hollow MAX stations.

Teetering on the edge of possible funding, meanwhile, is a high-profile request from the City of Portland: $2 million that would extend the city’s planned bike sharing system beyond the central city, east to 33rd Avenue and north to Killingsworth Street. 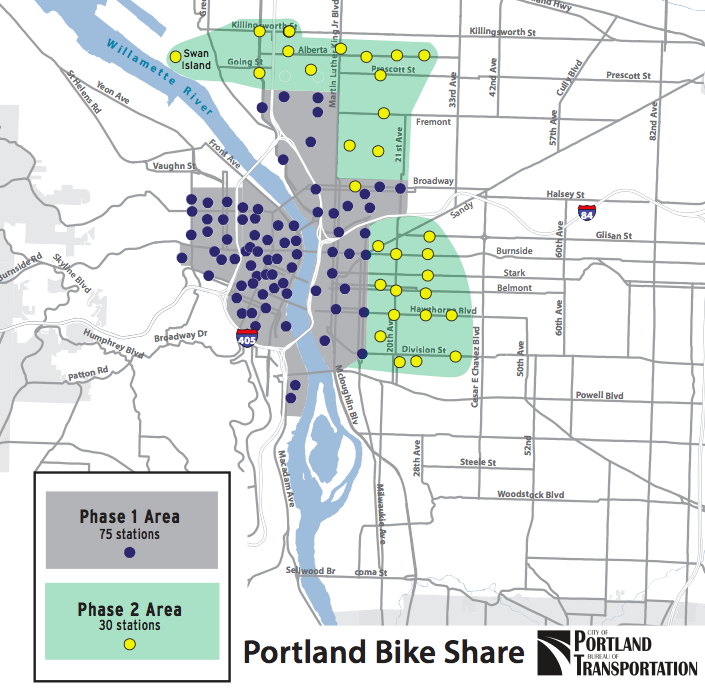 A conceptual map of the locations of future bikesharing stations. The city hopes state lottery funds will pay for 30 stations, in yellow, after federal and sponsorship dollars pay for the first 75 stations, in blue.

Last month, a statewide committee named the Tualatin path connection as their second-priority biking or walking project in the state (PDF) from a list of 36 requests. The Portland bike sharing expansion (which would presumably be contingent on Portland’s planned 2015 launch of a central-city bike share system) rated fourth among biking/walking projects statewide, and the Tigard project seventh. A statewide committee ranking transit-related projects, meanwhile, rated the west-side park-and-rides sixth of 13 requests. 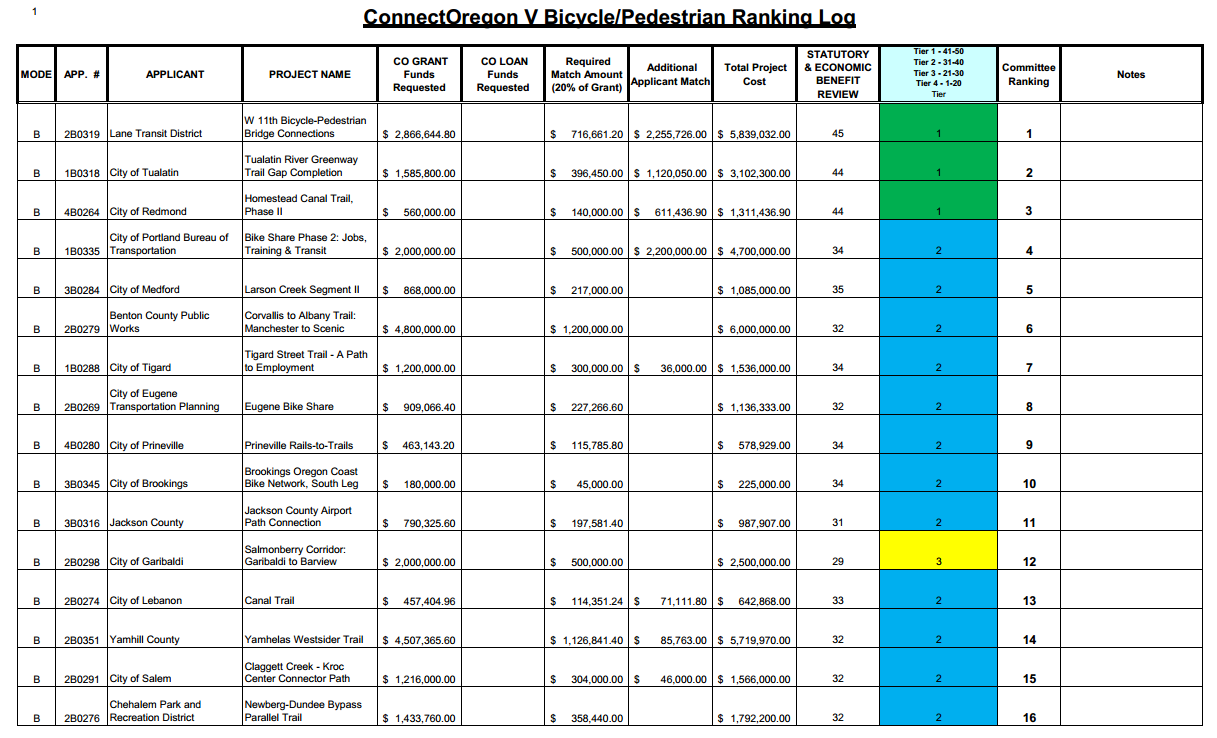 A ranking of the state’s top biking/walking projects.
(Click for PDF)

A separate draft ranking released this week that rated all requests from the Portland metro area — pitting aviation, rail, truck, car, bike/walk and public transit projects against one another — rated the Tualatin path third, the Tigard path eighth, the bike-and-rides 10th and the bike share expansion 15th of 26. 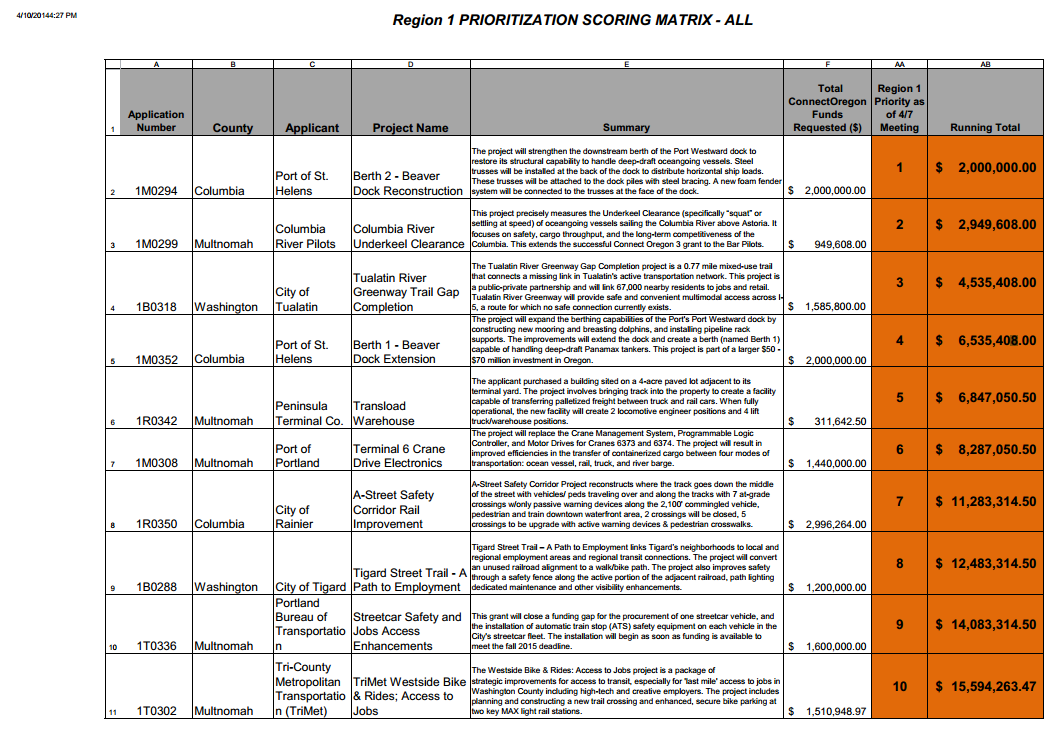 A draft ranking of the Portland metro area’s top Connect Oregon projects of all modes.
(Click for PDF)

The next step is a May 9 meeting at which members of the Portland-area regional committee will finalize their rankings. After that, it’ll be on to a joint statewide committee, which will meet in Portland June 11-12 and is expected to make authoritative recommendations to the Oregon Transportation Commission.

“Quite frankly, I’m not sure on how it’s going to come out,” said Chris Cummings, an Oregon Department of Transportation staffer overseeing the program.

Under the terms of the program, each of ODOT’s five regions will get at least $4.2 million, with the remaining $21 million divided among them based on which projects show broad support on the relevant committees.

For example, if every committee member were to rate a given project fifth, it’s likely to come out in the top three after all votes are scored.

The fact that biking and walking projects are up for lottery funding at all is remarkable, and due to a significant legislative victory this spring by the Portland-based Bicycle Transportation Alliance. After other groups had given up hope of making active transportation projects eligible for Connect Oregon, the BTA stuck with the cause and convinced state legislators to make them eligible for the first time.

Susan Peithman, a former BTA staffer who now works for the Portland State University-affiliated OTREC institute and sits on all three committees that will allocate the Connect Oregon funds, said there’s still time for the public and politicians to make the case for various projects. No public testimony will be accepted at the May 9 meeting, which is set for 8 to 10 am at ODOT’s Northwest Portland regional headquarters. Citizens can email ODOT staffer Kelly Brooks with comments for the committee, however: kelly.brooks@odot.state.or.us.

“Columbia County seemed to get a significant amount of the money this round on the draft list, and there was some discussion on that,” Peithman said.

Peithman mentioned that Sen. Betsy Johnson, a centrist Columbia County Democrat who holds a key swing vote in the legislature and is seen as essential to the survival of the Connect Oregon program, personally attended two of the selection committees’ meetings.

“How do you very clearly evaluate a dredging of the Columbia River [compared] to a ped-bike bridge connecting a multi-use path?” she said.

Are those Port Westward docks at the Port of St. Helens, that they’re ranking high on the combined list, the same ones that somebody wants to use to load coal on to ships and send to China?