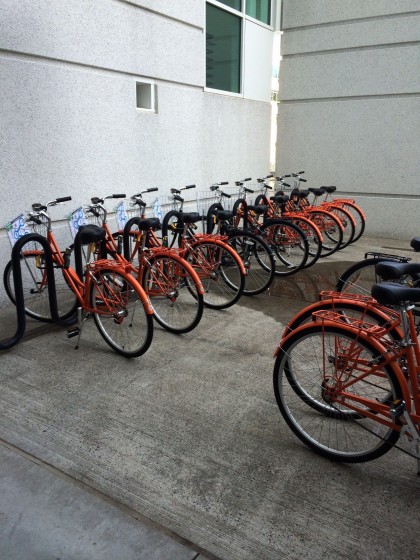 For a thriving sportswear giant, Nike has seemed oddly unplugged from the active transportation revolution of the last decade. But this week, things changed a little in its Beaverton backyard.

The fast-growing company is following many companies that operate on suburban campuses by launching a corporate bike share system that’ll help employees zip among its buildings, according to a reader familiar with Nike’s campus.

The reader, who asked to remain anonymous, explained the basics of the system in an email earlier this week, adding at the time that it was “not up and running yet.”

I snagged this pic (link above) yesterday of a station at the Mia Hamm building. Each bike has a number and a lock associated with it. Here’s how it works:

Users will sign up for an account that links their name/address/employee # to their cell phone #. If they want to use a bike, they text the bike# to a Nike automated system that will text them back with the combination to the lock. Once the bike trip is done and locked back up at another building with the same lock, the next person who texts in the bike number to get the combo takes “ownership” of the bike.

I’m not sure how far the network reaches but since they’ve been expanding out to Millikan Way and 158th, there could be a few hundred bikes spread out over ~10 square miles.

According to an email circulated to staff, both Nike employees and external temp workers are eligible for the free program, with the first 500 to sign up receiving free helmets.

Though the prospects for Portland’s civic bike share system remain dicey — many eyes will be on the similar Seattle system that’s supposed to launch in a few months — it’s great to get another reminder of how quickly the broader concept is catching on. And it’s nice that hundreds of the smart folks at Nike will be getting regular reminders of how gracefully the bicycle can enable life in a densely inhabited, creative community.

Fredliness is Next to Godliness

“I’m not sure how far the network reaches but since they’ve been expanding out to Millikan Way and 158th, there could be a few hundred bikes spread out over ~10 square miles.”

oh! that explains this part:

so is this the first company to offer bike sharing off-campus? I know other companies have been featured here on BP but those were all for on-site only and as far as I know they didn’t promote helmets because they never went on a city street…

I pass through that area all the time. Nike has now expanded and owns essentially all the land bordered between Walker, Murray, Jenkins, and 158th ave. They also have a few buildings along Millikan. It is essentially all on campus, it’s just that some bits are a little disconnected from the main Nike campus.

Here is a link to an article that describes their expansion:
http://www.bizjournals.com/portland/blog/threads_and_laces/2014/03/nike-expansion-plans-could-be-much-bigger.html?page=all

The number of people Nike has outside that Murray/Walker/Jenkins/158th trapezoid easily reaches into 4 figures. Nike also has a new tech services campus out on Evergreen Parkway, 8 buildings at the Millikan office park you mentioned, and two large buildings leased from Tektronix on that company’s campus. Still lots of people spread out away from the main campus.

No snark here–this is a really, really good thing. One of the region’s biggest companies, enough so that the governor kissed their ass to keep them around, doing bike share including off-plant riding–is it too optimistic to think that Phil Knight will now have transportation cycling in his conscioiusness? What if Nike said “control speeders or we move to Washington?”

Omg I would love it if they made an ultimatum like that.

there has been a smaller version of bike sharing at Nike for quite some time. No locks, just bikes and helmets. You could sign one out, and sign in back in when you were done with it. If there was a share bike parked somewhere not in one of the pickup spots, it was in use. I always had my own bike, so didn’t use it. You go on campus and think no one bikes, because there aren’t any bikes in the racks. That is because, when I was contracting there, they didn’t mind where you parked your bike, as long as it wasn’t in the way. I have pictures of my bike parked inside many of the buildings. Parking on campus is very tight; my group was off campus and we had meetings on campus. I could ride over and be at the meeting before those who drove. 🙂 And I never bothered to lock it. Of all the places I have worked, best cycling environment for bike commuters, hands down.

I worked at Nike for 2 years as an ETW, and many in my group biked in from Portland. Most of us parked our bikes in cubes (employees) or hallways/fishbowls (ETW).
The major downside was no shower facilities for us “temps”. I changed clothes in the bathroom, and never got a shower. I would bike 6 miles total, and on hot days I sweat a lot. I hope that’s improved since 2005.

While I enjoyed some aspects of working there, I’ve never felt more like a second class person than as a Nike ETW.

Bike Portland needs to get out of Portland every now and then. Each morning on Walker Road and up the bike path along 26, lots of folks headed west to Nike, Yakima, Columbia Sportswear, Intel, etc. There are a lot of employers out this way with bike parking and locker facilities.

And to teach in the burbs!

I wonder how much during the day traveling between campus locations, ‘x’ number of Nike employees or visitors are making, that may have contributed to the company having decided to provide this on campus bike share system. Also, what exactly all the reasons for providing the system were.

Within a 2-3 mile radius of the Nike campus, multi-family housing stock, some of it mixed use, is increasing. A question would be whether the type of housing being built is something that Nike employees would like to live in. If if it is the kind of housing they like, and more of them moved there, that has the potential of helping to cut down motor vehicle use to and from the campus, and the huge areas of land on the campus devoted to parking cars.

The ride on 153rd between Jenkins Rd and Milikan Way, between the campus and the location where Nike has had some operations in some single commercial buildings, is a short, fairly easy ride. Newer road, has bike lanes. Greatest downside to that connector street for biking, is that too many people driving may be using it simply as a cut-through, rather than using Murray and Jenkins.

Nike should be sponsoring the bike share project in Portland. A hundred million in making more bikes available will cut more cancers than the $500 million ($1 billion, after donations) for the cancer research center. Just a thought.

Riding a bike prevents cancer?
I thought Livestrong was (co)founded by Lance Armstrong. He did not get cancer until after he was a pro.

Hmm. Less benzene from our local gas blend being released near urban freeways and local roads? Not to mention other partially combusted hydrocarbons. Listen to my man Jeff, eh?

Fortunately Nike leases several buildings (all with bikesharing stations) immediately across the empty field from the Beaverton Creek MAX station. So you don’t have to walk very far to grab a bike and ride that last mile to campus.

Luckily the Beaverton Creek MAX Station is exclusively for Nike employee use, because now there is no bike parking left.

Ahh..this is so awesome..It’s been almost one year but nothing like this has been introduced here in India. :d