Tomorrow, Portland’s city council is expected to approve a project (item 234) that’s likely to chart the city’s shift to “Vision Zero,” the philosophy that nothing — not vehicle speed, not road capacity, not even economic productivity — is more important to the transportation system than preventing the serious injury or death of a person on the road.

It’s a provocative idea. But what exactly does it mean the city would do that it doesn’t already do today?

The city’s plan isn’t written yet. Local consultants for Nelson\Nygaard won the contract of to write the plan, which is part of a larger two-year, $150,000 strategic work plan for the transportation bureau. PBOT Spokesman Dylan Rivera said Monday that the work plan would be written by fall.

But a look at the plan recently announced in New York City suggests some possibilities. Here’s a list of the specific promises announced by incoming Mayor Bill de Blasio in January, as recorded by the video above.

2) Lobbying the state for the right to install speed cameras wherever the city wants, without state permission, and to start issuing tickets for violators.

3) Boosting police traffic investigations to include critical injuries as well as probably fatalities, a 20 percent increase in caseload.

5) An inter-agency working group with a one-month deadline to submit:

5a) a plan to dedicate more police time to enforcing speed limits and proper yielding at intersections, plus

5b) the names of 50 different intersections to be improved within the next year.

If you know much about how local government works, you might have already noticed something about this list: every single item includes an agency that in Portland is not controlled by the transportation director: the police department. 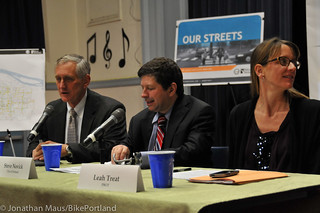 In the case of item 2, Oregon’s legislature would also need to get involved. Last year, the Bicycle Transportation Alliance unsuccessfully pushed for the state to allow police officers to issue tickets using information from unmanned traffic safety cameras on high-crash corridors. It’s considering another such effort in 2015.

“I’d be thrilled to see the city re-engage on this issue and push for more traffic safety cameras on our high-crash corridors,” BTA Advocacy Director Gerik Kransky wrote in an email. “It is time for this to happen.”

Will this and other changes to police practices be on the table in Portland? It’s not out of the question, since the man who oversees the Portland Police Bureau, Mayor Charlie Hales, endorsed Vision Zero at a campaign event, according to BTA Executive Director Rob Sadowsky (who said he’d asked Hales the question himself).

Sadowsky said last month that he isn’t sure “that we have the political will or, I don’t know, the chutzpah, to take some of the steps on the enforcement side.” But he said enforcement would be necessary for Vision Zero to fulfill its promise.

In the video above, New York City Police Commissioner Bill Bratton speaks for almost as long as Mayor de Blasio, detailing his department’s commitment to his mayor’s agenda.

“A life lost is a life lost, whether by murder or by traffic accident,” Bratton said.

You probably mean copy, not steal. The two words are very different things.

Not if Portland takes credit for it later. 😛

Hart,
I respectfully disagree. I think many of Portland’s drivers push the boundaries of what is acceptable. I suspect people would learn very quickly that their are real consequences to speeding and distracted driving and would modify their behavior. IMO, if people slowed down and paid more attention, we would have fewer accidents.

I love this approach of enforcement and infrastructure improvement, lets copy!

There are many factors that go into a safe transportation system. For instance, a ‘system’ would include all those involved, from the road designer, road operator, road users, the enforcers, adjudicators and legislators. Most road users have not been involved in a crash, let alone witnessed one, so their perspective has a big hole in it. Maybe if speeders had to read through a couple years of fatal collision reports they might gain some perspective. Part of the issue is simple knowledge. Retesting road users frequently is common where fatalities have plummeted. Enforcers are unlikely to issue more citations when adjudicators repeatedly lower fines, thus a 10 mph minimum violation before citations are issued. Portland can’t post 20 mph on all residential streets without sidewalk as a matter of state law. Business owners put profit ahead of death or injury when fighting to keep parking spaces instead of installing bike lanes.
Vision Zero/Safe Systems approach traffic safety from the risk point of view. The standard is tied to what a human body can sustain in energy absorption without severe/life threatening damage. For pedestrians it’s about 20 mph. For side impact auto collisions its about 30 mph, and for head-on collisions its about 45 mph. Also key is that road users will continue to make mistakes, forever. That said, if the road system cannot be altered for speeds higher than the maximum thresholds, speeds need to be lowered.
Transportation system users need to refocus on the system as something they consume and demand a safer product.

Best I’ve seen so far on the topic:
http://tinyurl.com/OECDspeed

Most road users have not been involved in a crash

I would assume the opposite…

a quick search says that you’ll file an insurance claim for one one every 17.9 years…

Beat me to it, I was gunna look for them same stats after reading these posts…..

Item 5a has resulted in a blitz of ticketing–not drivers–but cyclists and pedestrians.

The police have proven themselves unable to do automated speed enforcement without losing money on it. Rather than burden them with administering a speed-camera program, give it to PDOT as part of Steve Novick’s funding wishlist. Use the money from speeders to build sidewalks and crosswalks on outer Powell.

I don’t care at all if automated enforcement is not profitable… driving isn’t profitable, so enforcing it doesn’t need to be…

actually, here’s an incentive… driving should be so expensive that it covers the cost of enforcement… the more people break the law the higher the cost of gas and associated taxes… if everybody obeys the rules then the cost will come down so it’s only operational…

The only reason that is the case is that the fines imposed for tickets aren’t steep enough.

The couple tickets I’ve gotten in life (seat belts X 2 at the time I drove in an occupation that they weren’t required, and a brand new school zone – for a (at the time brand new) small private church school -that I didn’t notice cause I drive that route nearly everyday). Fell into the category of not being worth even my time to go to court over. I’d have ended up losing money in wages even if I won the appeal.

If those tickets were $500 instead of barely a Benji, you bet people would notice. And that they (the tickets) would be profitable. Profits could then be funneled into infrastructure improvements, since it’s not the governments job to actual turn a profit.

Of course for it to work, the courts would have to be willing to not lower the fines for such excuses as “economic hardship” and what not.

Cameras themselves don’t help, but radar units that display the speed under the speed limit (and flash when it’s exceeded) do. I have an idea for a more modern, connected, cost-effective, and useful version… I think the “Vision Zero” movement across the country (unfortunately due to the rise in pedestrian deaths) will create a market for them.

It’s pretty sad that a lack of personal responsibility and simple respect for human life makes such a mass movement necessary – money that’s better spent improving infrastructure is instead diverted to preserving users of it.

P.S. Someone should remind Commissioner Bratton that the word “accident” is obsolete… 😉

Traffic engineers have a saying, if signs worked, you wouldn’t need traffic engineers.
All signs have an initial shock value that declines over time (decay). I agree that the electronic reminders will help longer, but they need to rest in off and only activate for inappropriate speeds.
Long term, education of road users about the hazards of speed, like MADD did for DUII, also needs to be part of the solution, but that is only the road users.
If safety were more important than mobility, bike lanes would replace parking lanes all over the City.

Don’t kid yourself, New York (and the I-95 corridor of cities on the East Coast) are not Portland. Back East, the speed camera angle has nothing to do with safety. It’s a way to arbitrarily plant cameras “wherever they want” for purely revenue purposes*.

As a daily cycling commuter, I shouldn’t even care about this, but, I do and it’s a reason I came to Portland. The city where we should actually think methodically and strategically about improvements that will make it safer and more efficient for drivers and cyclists/Peds.

*Yes, this is subjective based on experience. But, until we have more studies that prove (in the positive) that speed cameras actually work – than studies that conflict with their effectiveness – I’ll feel this way.

and how is this bad?

i vehemently support anything and everything that makes unnecessary low occupancy vehicle trips more inconvenient and more expensive.

Speed cameras, as implemented in a lot of places, serve only to make money for private contractors and create an incentive to issue as many tickets as possible, sometimes by shortening yellow lights, etc. What might be good is if the City retained ownership of the camera systems and used the money generated for bicycling & pedestrian infrastructure. “Thank you for donating to the Portland Bicycle & Pedestrian Infrastructure Fund.”

automated speed enforcement systems in europe generate revenue and are very effective public safety tools. (the real innovation was modular design that allow rotation of cameras among a much larger set of installed boxes.)

unfortunately, this cheap and effective stratefy to save lives and make our cities more livable is **ILLEGAL** in the state of oregon.

Stiffer punishments would deter much more effectively if they apply to all cases of dangerous driving, not just when a person is killed.