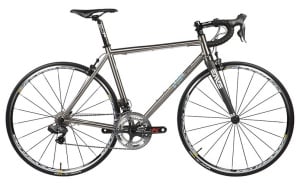 Portland-based Sage Cycles now has
its titanium frames made in Tennessee.

Portland’s local bike industry is alive and well. How do we know? Companies are launching, moving, expanding, hiring, and generally taking the bike world by storm in a number of exciting ways.

But don’t just take my word for it. Check out list below of local industry news we’ve been collecting over the past month or so… 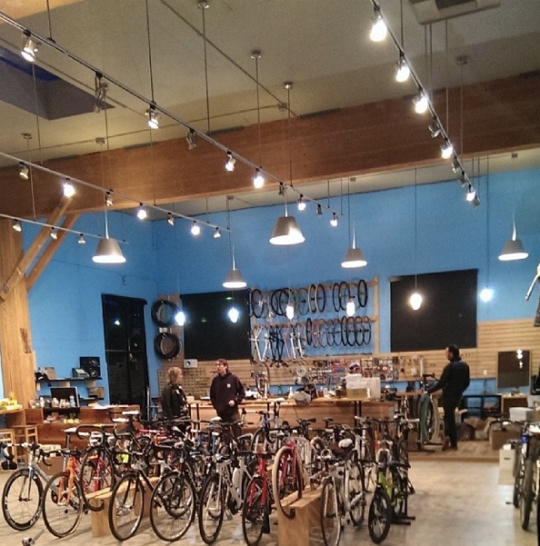 The new location includes a cafe, a fitting area, lots of natural light and high ceilings.

Now Portland Bicycle Studio has made a major move and is located at 1435 NW Raleigh. Molly and her crew spent a few weeks doing a huge renovation to their new corner space and the result is a beautiful new store. Molly has big plans for the new space that already includes coffee service and expanded showroom and repair areas. Largely known as a pro shop for top-level racers, Portland Bicycle Studio has plans to diversify their offerings with new lines including commuter bikes and more entry-level options. More at PortlandBicycleStudio.com 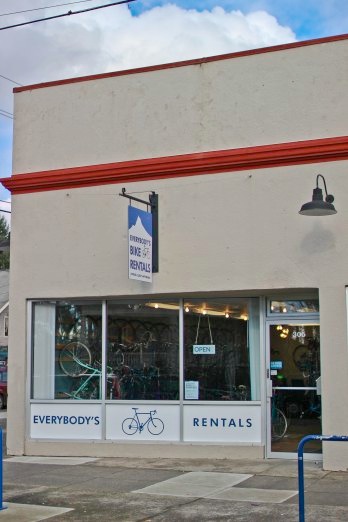 Dan Sloan opened his bike rental business two years ago out of his basement on N Going Street. Now Dan has moved into 305 NE Wygant (just one block west of Martin Luther King Jr. Blvd). Dan rents mid-level 1980-90s road, commuter, and touring bikes that he has “lovingly built and refurbished”. In other words, folks who rent from Dan don’t look like a tourist when pedaling around town. Learn more about hours and rates at PDXBikeRentals.com. 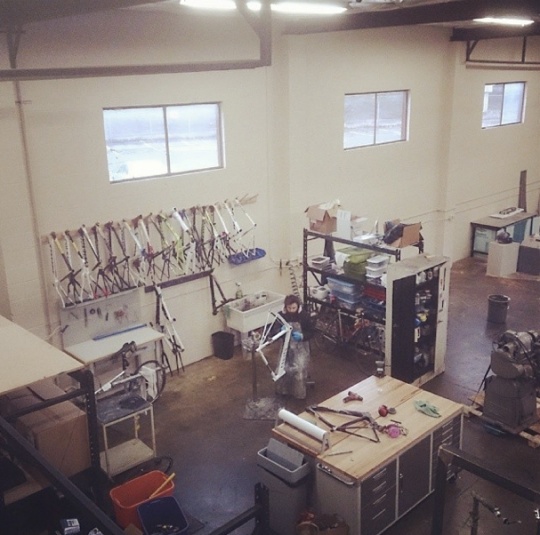 Shawn Small and his carbon fiber repair business have come a very long way since we profiled them in 2009. The company has gotten so busy — whether filling orders for its Kickstarter’d Carbon Access Tool, repairing broken carbon fiber bike parts, or launching things into space — that Shawn recently completed a big move to a new manufacturing facility at 87 SE Stark St. Actually, he calls it the Ruckus Composites Lab. Here’s more from a recent press release:

“We have been working towards a dream of building an amazing Carbon Fiber Support Center for both consumers and industry folks that want to learn about bicycles, science and materials.

The new Ruckus Composites Lab now has enough room to add some serious firepower to our carbon fiber resources and help us realize this dream.”

With more space, more machines, more big ideas, and more business than ever, there’s no telling what Shawn and his crew will do next. Check out RuckusComp.com. 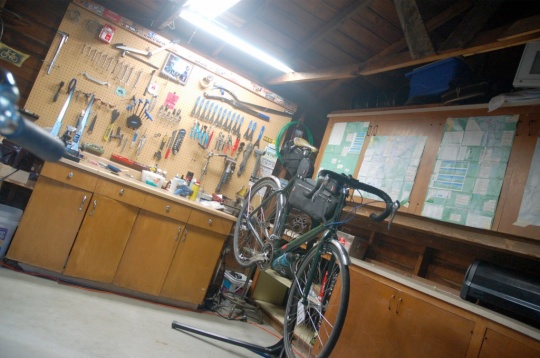 Ride Yr Bike is a new shop opened by Nathan Jones. Nathan is a former mountain bike racer and bike shop employee who has completed the grueling, 3,000 mile Tour Divide race (more about Nathan here). These days Nathan is excited about adventure riding and he wants to introduce local backroads to others. You might remember Nathan from the story we published last month about a fat bike adventure to the Oregon Coast via the Salmonberry Corridor.

At this point, Nathan’s shop is located in a garage in southeast Portland and he’s open only for rental reservations or by appointment (or he’ll come to you). Learn more at RideYrBike.com. 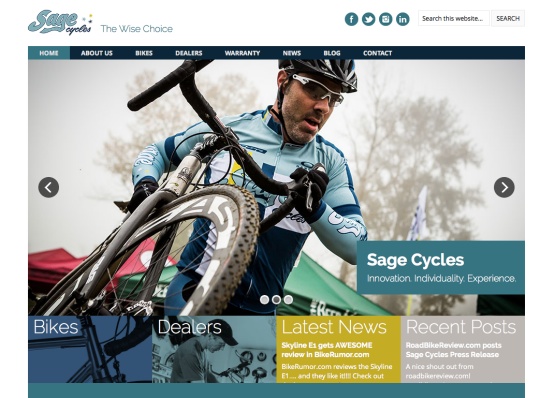 In less than two years, David Rosen has nurtured Sage Cycles into a brand that is beginning to raise some eyebrows in the bike industry. After launching in 2012 by importing Chinese-made titanium frames, he has since decided he can offer better quality frames at a competitive price by making them here in the U.S. Now his line of Sage frames are made by the folks at Lynksey Performance in Chattanooga, Tennessee.

David, who offered free test rides at many races during the recent cyclocross season, says his target market are customers who want a high performance titanium bike at a more affordable price. Sage currently offers road and cyclocross models but has plans for a commuter bike and a mountain bike in 2014. Learn more at SageTitanium.com. 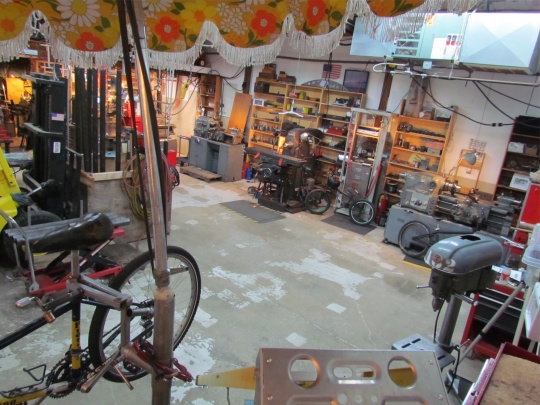 We first profiled legendary mechanic and tool-maker Brett Flemming from the crowded (yet extraordinary) shop space he created in a converted garage. That was seven years ago. Today, Brett’s company, Efficient Velo Tools, has grown considerably and Brett and his crew recently completed a move to a 2,700 squre-foot building in northeast Portland (5325 NE 109th). Brett now has a full-time shop manager, demand for his high-end bicycle shop tools and accessories has never been stronger, and he’s very optimistic about the future of EVT. Learn more at EfficientVelo.com. 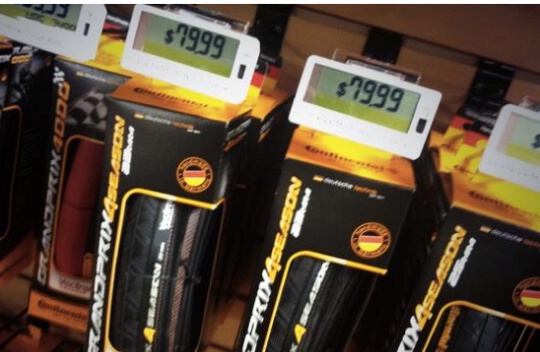 The final item in our round-up is something I noticed at Western Bike Works‘ retail shop in northwest Portland the other day: electronic price tags. Instead of individual labels, nearly every item in the store is on a rack with the price displayed on a small LCD screen. An employee said the prices are controlled remotely by inventory specialists at their big warehouse out by the airport. That way, the store’s prices reflect the exact same prices on Western’s online store.

We love covering the local bike business beat. If you have tips or stories to share, drop us a line!

Congratulations, Dan! That looks like the old Bike Farm location.

Showing the BikePortland crowd a $80 bike tire is just asking for it. But it’s made in Germany so you know it’s good!

Thanks for the plug! I specialize in Surly Bikes with a serious bikepacking bent and of course rent FAT bikes. All folks inclined to have a direct relationship with their mechanic should give Ride Yr Bike a shot.

There’s also a new fat tire bike shop on MLK between Failing and Shaver, west side of the street. Don’t know if that’s been reported on BP, open about 2 months now.

Portland is really showing the way to go!