[This is the third installment of my “In the shop” series. Check out the first two on Joseph Ahearne and Tony Pereira.] 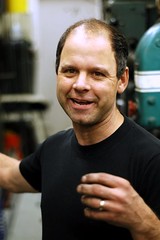 At the end of a cul-de-sac in a non-descript, Vancouver Washington subdivision, is the home and shop of Brett Flemming, an extraordinary machinist, inventor, and head mechanic for one of the largest bike shops chains in the country.

As service manager for the Bike Gallery and owner of Efficient Velo Tools, Brett is known for his encyclopedic knowledge of bike repair and his flair for creating high quality bike tools.

Brett is a regular speaker at bicycle dealer seminars and events around the country, where he rattles off facts, figures and lessons learned from his nearly 30 years of bike shop experience. 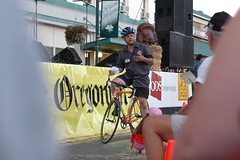 Brett’s talks are a favorite at Cycle Oregon.

I first saw him in action at Cycle Oregon. Each night he took to the stage and gave a series of talks on everything from shifting to cornering.

Brett possesses a vast body of knowledge about the inner workings of bike parts. But, unlike some mechanics, he shares that knowledge with an infectious charisma and approachable enthusiasm that is hard to ignore.

I joined him recently at his home machine shop which exists through a small door in an otherwise normal garage.

On the way over, I learned that Brett’s fascination with fixing bikes started at a young age. He said he was “born a mechanic” and that his dad, a Navy corpsmen, taught him about bikes as a kid. He recalled that the best gift he ever received as a young man was a welding machine. 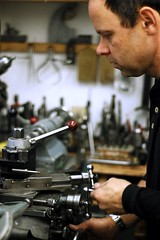 Brett has an intimate
understanding of his machines.

Brett confessed that he never excelled in school because he always read bike magazines during study hall. It probably also didn’t help that his teachers were into bikes and rode in RAGBRAI, a popular group ride in Iowa that has become a state institution.

He knew business wasn’t for him, so he got his first job at a bike shop at the age of 17, just 10 days after high school graduation. He loved the work and put in 54 hours in his first week.

Brett became interested in framebuilding in the early ‘80s. In 1981 he build a 21 pound, 21-speed mountain bike and soon after built a six-foot high unicycle.

He only made about 13 frames, but that endeavor sparked an interest in tools (he needed fixtures and jigs to make his frames) that is still going strong today.

For the last seven years, Brett has owned and operated Efficient Velo Tools, and for the last year or so, he’s worked out of this shop attached to his garage.

Brett (L) and his assistant Aaron Adams in the shop.

I took it all in, and Brett could tell I was impressed. With his trademark smile he quipped,

“Yeah, my neighbors are all sissy suburban lightweights with nothing interesting in their garages.”

As Brett talked shop with his assistant Aaron Adams, I roamed around with my camera…

[A 6,700 pound, 1940s Holbrook lathe that is “very accurate” and, “looks like it belongs in a factory, not someone’s backyard.”]
[I marveled at the tools and drawers, feeling like I was in the midst of a mad (but friendly) scientist.]

A pantograph engraving machine, “Looks like some Rube Goldberg machine…they’re completely obsolete, but not to me, I think they’re cool.”

With no traditional apprenticeship, Brett learned how to run all these machines primarily through his innate curiousity,

“I learn a lot online and by meeting other machinists, but usually it comes down to just buying the machine and trying it out for a while. I’ve just always been able to figure these things out.” 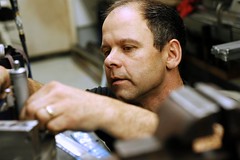 While most production machinists have moved on to automation and CNC machines, Brett does everything manually. He has a passion for classic machines from the the Golden Age of American manufacturing and he still uses them to create his products.

He doesn’t just work on the machines, he seems to know them, and treat them like old friends. As he bent over one of them, twisting its dizzying array of knobs and levers, he said, “I just like keeping these old tools and machines alive.”

Brett also likes to give new life to discarded parts and materials. He showed me a huge, rusted old bolt he found on the side of the road. He ended up using it in one of his work stands. He was also proud of a box of springs he’d amassed through the years. He said these recycled parts were a chance to give his tools “personality.”

As he showed me around the shop, he insisted on making me a souvenir. It would be a small tool, designed to insert spoke nipples into deep dish rims. He grabbed a small piece of cylindrical material and talked me through the entire process. 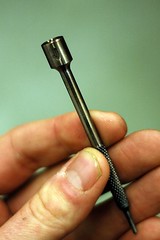 A fine tool of my own.

He started on the Holbrook lathe, backing the small piece in and out until is was perfect and trying not to let his ongoing narrative impair his dexterity. A quick change of the bit and he gave it a knurled finish. A few more passes and it was almost complete.

I watched and listened as he completed each step. Once the shape was finished, it was heated with a torch, dipped in carbon ash and then dunked it in black liquid, making it case-hardened and heat-treated. Then came the final touch; he engraved it with a “J” right before my eyes.

Even though it was a small tool and just meant as a souvenir of my visit, Brett wanted it to be perfect, and he made it to last forever.

It’s this attention to detail and quality that has made Brett’s small, fledgling tool business a success.

Selling mostly wholesale to large distributors and bike shops, his offerings range from a nifty helmet-mounted rear-view mirror to elegant and functional clamps and work stands for holding bicycles during repairs.

One of his most refined and beautiful products is his “Right Arm” repair clamp. Quite possibly his signature product, it is leaps and bounds superior to what’s on the market.

Brett’s tools aren’t in every shop and catalog in the country, but they are appreciated like fine wine by serious mechanics. His “Trigger” wheel dishing tool, which includes a spring that he makes himself, is used by professional Mavic technicians.

I find the products that don’t make it into the catalog to be his most interesting creations. Take his “$700 floor pump” for example. It’s a perfect testament to Brett’s design and manufacturing philosophy. 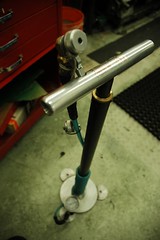 Brett is working on a floor pump.
This prototype would cost about $700,
but it’s a work in progress.

Like all of his products start the story of the pump starts with a series of anecdotes about why existing ones fail to meet his high standards. He rattles off a list of them; the hoses are “chintzy”, the pressure gauges don’t withstand abuse, they tip over too easily, and so on.

His floor pump project, which he admitted has been “an exercise in frustration,” has evolved the same way all of his tools do. He doesn’t make drawings, or use design software, he just starts putting them together and solves each design problem along the way.

Brett’s goal is to create the the ultimate tool, and then figure out if it’s possible to actually sell it. As he showed me the pump’s glycerin-filled, shock-resistant dial, and the piece of felt that lubes the pump shaft he said, “I don’t care about being the cheapest, just the best.”

Awesome shop, great story! Love all the old equipment – it’s totally true that they don’t make them like they used to.

Thanks for focusing on Brett’s artful science. I am inspired by people’s unique passions — especially those that are so different from my own. Thanks for showing us the art in tools.

Great feature! I use several of Brett’s tools and they’re truly several cuts above everything else. At least a couple of times his designs have solved problems before they existed as in his tool for installing headset crown races on carbon forks.