Ruckus Components weaves a business out of carbon fiber 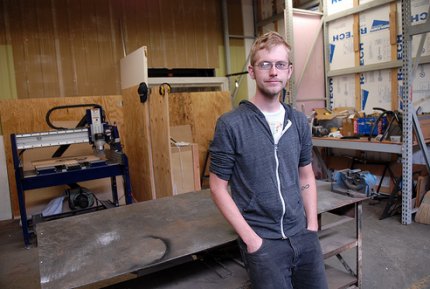 Carbon fiber has been the darling of the bike industry for years now. Lance Armstrong’s dominance aboard Trek’s OCLV model in the early part of this decade, and an industry-wide obsession for lightweight performance (and a need to sell new bikes), turned carbon fiber into the Next Big Thing.

With Portland’s burgeoning bike industry, it was only a matter of time before the magical material ended up here. 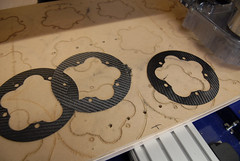 Shawn Small, 25, is the man behind Ruckus Components, a fledgling company he founded in early 2009 that operates from a non-descript warehouse (which he shares with another bike company, Portland Design Works) in Southeast Portland’s Brooklyn neighborhood.

Small has a mechanical engineering degree from the University of Wisconsin (his senior thesis was on residential wind turbines, one of which he has tattooed on his calf) and he worked in a variety of related industries before moving to Portland one year ago. “I was ready to move and I loved the bike scene here. I figured it would be a perfect place to start my company.” (The only downside to being in Portland, he says, is a lack of complementary heavy industry.)

Ruckus’ first fully-developed product was a carbon fiber chainguard. A chainguard protects the chain and chainrings from being damaged by rocks and crashes. Small created his first prototype on a computer in his attic three years ago and now has several bike dealers (in both Milwaukee and Portland) placing orders.

Small has come a long way since those days in his attic. He currently works out of a 1,200 square-foot, three-room warehouse space and spends much of his time piloting his new machine — a CNC router he controls from a nearby laptop. The router allows Small to quickly cut intricate designs into carbon fiber and aluminum. 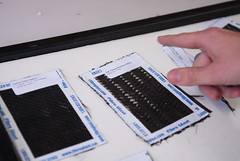 During a recent shop visit, Small shared his passion for carbon fiber. Quite unlike any other material used in the bike component world, carbon is a textile that comes in strands that are then woven and molded to desired effect. Standing over swatches of various types of fiber, Small’s enthusiasm for his work was obvious. Working with carbon fiber “can be intense” he said. “If you really want to maximize something, you’ve got to go crazy with it.” 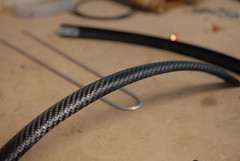 These beauties should be available soon.

With his chainguards finding a place in the market, Small is already ‘crazy’ at work on other products. Next up will be carbon fiber fenders, a rarity in the bike industry. “I’m trying to bridge that gap between performance and transportation-minded products.” Small said he was tired of going through a set of plastic fenders each season, and thinks others will want a durable set that are also light and strong.

Another product that sets Ruckus apart in the carbon fiber field is his new “Porteur” front rack. Small teamed up with local rack maker Tad Bamford of TCB Racks and added a platform built from carbon fiber and wood (good for vibration dampening he says). Small then cuts away the carbon fiber, exposing a design on the wood.

Looking to someday become a full-fledged component company, Small is also working on stems (due by next year), seatposts, and his most ambitious project to date — a “fully custom” carbon fiber frame. 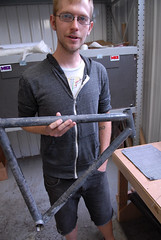 Small and his custom cyclocross
frame.

Holding the cyclocross frame (which he hopes to race this season) in one hand, Small explained what makes his “fully custom”. “I make my own tubing [versus buying and then joining pre-made carbon fiber tubing]… I can fine-tune every part of the frame.”

Like any small business owner in the start-up phase, Small puts in long hours in his shop. 70-hour weeks are normal these days, but he hopes to have two part-time employees by next spring. To keep things fun, Small started the Ruckus Test Team over the summer, with the idea that members will help him test products in the future (they also won “Best Jersey” at the recent MS150 ride).

As his business blossoms, Small says his drive to succeed come from a frustration with the bike industry. Citing what he calls “a lot of copying and not a lot of real engineering”, he takes his company name to heart. “It’s not just the name of the company, it’s my motto as well. I want to create a disturbance in the bike industry by using carbon differently.”

Small’s dream projects are a carbon fiber penny-farthing and a 14 pound, folding travel bike. With ideas like that, he’s well on his way.

Every year around this time, the bike industry trots out their latest at Interbike which for the last decade has been carbon and looks, well, overproduced:

And while Shawn works with the same material, his stuff stands in stark contrast to the usual. It is smart, well designed, and doesn’t have any of the unnecessary carbon for carbon’s sake. This is as authentic as any handmade steel frame and Ruckus is an awesome addition to Portland’s Bike Industrial Complex.

Full disclosure: I am totally in line for a pair of those sexy carbon fenders.

I can attest to the passione with which Shawn is bringing his vision to life. At a recent BikePortland meet-up, we had one of the most intelligent discussions about untapped uses of carbon fiber that I’d ever had with ANYone in the industry.

Count this typically “all steel, all the time” aficianado intrigued enough to want to (gasp!) stop by and check out the Ruckus shop very soon.

no offense, but he’s tired of the unreliability of plastic, so he using carbon? in my opinion the only use for carbon is for the ultra performance minded. or those who get their stuff for free so it doesn’t matter if it breaks. which it will. on the other hand, everyone loves carbon, so he’s certainly filling a market need, so i hope he makes does well, he certainly seems to have a passion for it, which is good. i just don’t think carbon is a practical bike material.

His fenders are light and super strong. I’ve already ordered a front rack for my commuter!

I look forward to what else he can make!!

Can’t wait to put my front porteur rack from Ruckus on my winter commuter!

It’s nice that there’s another bike part manufacturer in Portland. I had no idea there was another bike rack manufacturer other than TCB in Portland, which frankly I couldn’t really afford, but that one on Ruckus is a bit more economical and BEAUTIFUL. Hopefully he’ll be getting them into the shops.

I’m wondering if anybody knows of a Portland manufacturer of bike cargo trailers? I’m in the market.

P.S. What complementary industries are lacking in Portland?

“…so it doesn’t matter if it breaks. which it will.”

I have a Trek 2200 (carbon main tubes, aluminum stays, fork, and lugs) that I bought in 1994, and it’s still going strong. Maybe I should stop riding it, lest it disintegrate underneath me.

C’mon, I’ll be the first to agree that carbon has been a little overused, and that it’s not the be-all and end-all, but to state that carbon is not a practical material for bikes is just a little over the top.

Ive known about ruckus wince it was mentioned on here awhile back, and I really want one of the chainring guards. But after freshly building my CX bike and still paying it off cannot quite justify it over alum. But its certainly on my wish list. The new components seem pretty exciting.