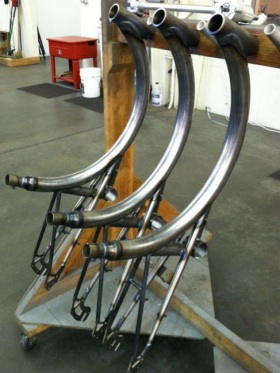 Last month we shared the story of Kinn Bikes, a new company that decided to make their frames right here in Portland. Now, another company has decided that Portland is the place to manufacture their bikes. Conscious Commuter Corporation, a company with offices downtown and in Los Angeles, just had a batch of 50 frames made at Zen Bicycle Manufacturing in North Portland.

We shared the launch of Conscious Commuter in June of 2011 and then caught up with them a few months later as they went public with their successful Kickstarter campaign (that raised over $25,000).

According to Bob Vander Woude, the company’s President and CEO, they were very close to producing the frames in China. “There were a lot of people in the industry telling us we had to manufacture in China or we wouldn’t be able to compete,” he told me via phone today. Vander Woude said they were all lined up for a trip to China to visit potential factories. “The more we thought about it,” he said, “It just really started resonating with our core principles,” Vander Woude said about the decision.

Vander Woude chose Zen Bicycle Manufacturing, a relatively new company founded by David Woronets, a former production manager at Ellsworth Handcrafted Bicycles in Vancouver, Washington. When Ellsworth decided to get out of the production business, Woronets bought the company and brought several of its employees to Portland.

Describing his decision to make this first batch of frames in Portland Vander Woude said many factors were at play.

“We also want to help rebuild the U.S. bike industry. We put a stake in the ground here… And by gosh, if there’s a way to make it happen, we’re going to do it.”
— Bob Vander Woude, President/CEO of Conscious Commuter

“When we started this company, part of our principles was sustainability… It really started resonating, and we also want to help rebuild the U.S. bike industry. We put a stake in the ground here… And by gosh, if there’s a way to make it happen, we’re going to do it.”

Vander Woude said that while the materials and labor are more expensive stateside (although not as much as you’d think on the materials side of things), he sees a lot of advantages in local production.

“Once you start to figure in the shipping charges [from China], the import duties, the miscommunications due to language barriers, shipping times, and so on, you’ve saved a lot of time and money,” he said.

In addition to making the frames at Zen, Vander Woude is trying to have as much of the other parts and labor done locally as well. He’s having them painted at Portland-based Class Act Powder Inc., the wheels are being built by Sugar Wheel Works on N. Williams Avenue, the electrical wiring is being done by Wakefield Gregg at The E-bike Store on N. Alberta, and the parts are being purchased through Cyclone Bicycle Supply in northwest. (The bike’s custom batteries are made by AllCell in Chicago.)

Full production models are still several months away, says Vander Woude, but they plan to launch a website for pre-purchases later this week. The bikes will be available in 17 different (and customizable) colors and in many different models; from basic, non-foldable models without electric-assist (around $1,200 retail), to a folding carbon fiber e-bike model that will cost nearly $3,000.

The bikes that have just been made at Zen are for a special project they haven’t announced publicly yet. Portland State University has received a grant from Drive Oregon (a statewide EV encouragement initiative) to purchase the bikes for an upcoming e-bike research project (stay tuned for more on this later in the week). In addition to the PSU project, Vander Woude says a high-end carbon fiber version of their bike has been chosen by luxury carmaker Lexus to participate in their “Ignition” project. That project will tally votes from the public and award one of eight projects $100,000. The video below will run on the Lexus Facebook page for a week starting on October 15th.

I’d love to see a shaft drive bike that is manufactured to some higher standard than Mal-Wart toy bikes.
I really need to see a high quality build fail consistently before I’ll believe that shaft driven bikes won’t work. As I understand it human power is low RPM/high torque. High torque failures of drive shafts are common in drag racing; as we scale material size down to human power vehicles and scale up to the low RPM/high torque power output of human input we can see the pass engineering concerns.

Been thinking that this could be solved with a internal planetary gear hub like Schlumpf that gears up like 1:50 or greater.

it doesn’t look like the rear of those frames fold…

When a normal human stands with all weight on a 6 inch crank she generates as much torque as the engine of a large motorcycle or a small car, and at zero RPM!

A steel roller-chain handles the resulting force in tension with no complaint, but a rotating shaft must do so in torsion. The only practical way to do that is to up-gear (increase speed/reduce force), but even so the major issue is force on the gear teeth, which tends to make for larger gears and greater size and weight. Super-hard and super-strong steels that would mitigate size and weight are available, but are super-expensive and super-difficult to fabricate.

By-the-by, the force and torque our rider can develop decline in essentially a straight line as she pedals faster. This “torque-curve” is like that of a steam locomotive or an electric traction motor, and completely different from that of an internal-combustion piston-engine, which is zero at zero RPM and peaks at several thousand RPM.

All those dreadfully numerous chain-flipping drive-ratios that are the default choice on American bicycles (revenge of Frank Schwinn’s “Varsity”) of every conceivable function are fitted because of the fallacious idea that the cyclist’s torque curve is like that of an internal combustion piston engine.

Look at it this way:

If you must ascend a steep hill to get your Chevy-to-the-levee and it bogs down, you shift to a lower gear, which does two things: engine speed increases, getting closer to the torque-peak; drive-ratio is lowered, transmitting more of the engine’s increased torque to the wheels. The two effects compound, and the Chevy accelerates.

On the other hand, if I am renting a beat-up mountain bike at SunRiver and bog down on one of the short steep hummocks, it does more harm than good to shift from gear 13 (say 64 inches) down to gear 11 (say 56 inches), because my pedaling cadence must increase in precisely the inverse ratio, dropping the torque I generate in exact proportion: (64/56)x(56/64) = 1. There is no increase in force to the wheel, and in fact I have slowed because of the time taken to shift and spin up my cadence. It’s like throwing out an anchor. All that has happened is that I have decreased force on my legs and knees.

Neither MAX trains nor locomotive 4449 have multi-ratio transmissions.

You totally lost me on that fixie conclusion. Gears allow much faster acceleration from a stop. And clearly, you’ve never tried to actually mountain bike over varied terrain. There are single speed mountain bikes, but they are usually for downhill riding. Try a single gear on a tandem and you can forget it. Our tandem has 36 gear combinations (4×9) and we use a lot of them, believe me. Otherwise we’re walking and that’s no fun at all. Now it can be said that three or four gears at sweet spot ratios is probably sufficient most of the time for most people. But concluding that a fixie is the way to go for everyone or even anyone is not supportable.

@ Jim Lee, you have solved a great mystery!
What single speed gear would work best for Wiggins next year in the tour, I’m sure there is an equation for that?
Or maybe…the human motor, unlike a car, can only sustain maximum torque for a limited time (due to fatigue), and has to shift into a more sustainable, (higher cadence), yet slower pace in situations that require more power for longer periods?
(Just a hunch)
I don’t think I’ll be ditching my gears anytime soon.

1. Wiggo has Olympic gold on the track, so he does not need advice from me on choice of gearing fixed.

2. Derailleur (“chain-flipping”) transmissions were designed for the extremes of stage racing; initially everyone rode single fixed. There are three circumstances in modern stage racing that require multiple gearing:

a. Extreme climbs at grades of 20% and above. Every rider has a limit to leg strength, so a low gear is essential, unless one decides to dismount and push.

b. Extreme descents at speeds above 40 mi/hr. Very high gears are necessary to sustain speed, and a freewheel enables the rider to coast with the inside pedal raised when leaning through a curve at great speed.

c. Most importantly, a range of medium-high gears enables the racer to choose the most energetically efficient gear, giving a cadence somewhat above 60 RPM, when riding in the peleton. 95% of a stage race is spent in the peleton; energy management there is paramount to success. The average speed on a grand tour is about 25 mi/hr, which few of us attain on our commutes or have the strength and skill to handle.

Except possibly when running the double red octagons at Ladd Circle.