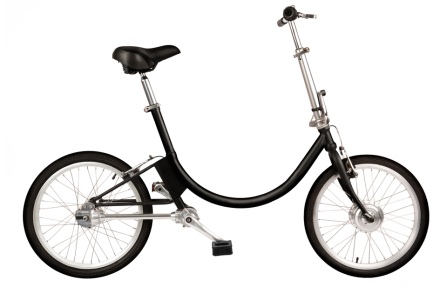 First prototype of the Conscious Commuter folding e-bike. Designed — and going to be manufactured (most likely) — in Portland.

It’s been just two months since I introduced you to an exciting idea for a folding e-bike; but the ‘Conscious Commuter‘ project has come a very long way.

Back in June, what was just a concept drawing and idea by art school graduate Gabriel Wartofsky is now a full-fledged, rideable prototype. In addition, the company behind the bike has been very busy garnering attention for not just the bike itself, but for the larger concept behind it — to revolutionize urban commuting with the perfect tool to bridge the elusive “last mile” of urban trips.

I’ve been in touch with Conscious Commuter Corporation President and CEO Bob Vander Woude for all the latest developments — including the company’s plans to manufacture the frames in Portland.

Along with a Kickstarter campaign that just launched last night, Vander Woude has announced that the bike will be featured on the “green carpet” at the upcoming Environmental Media Association awards in Los Angeles next month. Vander Woude and Wartofsky will also be on a panel titled, “Solution for the First and Last Mile Commute” at the inaugural SXSW Eco event in Austin, Texas.

Vander Woude also shared that the City of LA Planning Department, the Mineta Transportation Institute of Silicon Valley, and the Big Blue Bus in Santa Monica have all expressed interest in using the Conscious Commuter folding e-bike as a bike-share system to be integrated with buses.

In addition to marketing, the company has refined the design and moved from a drawing to a working, first prototype. Testing is already underway on the second prototype and Vander Woude says they are close to a deal with a Portland-based frame manufacturer to build the first production batch of 100 units in early 2012 (which the Kickstarter will hopefully fund).

Check out a few more shots of the prototype. 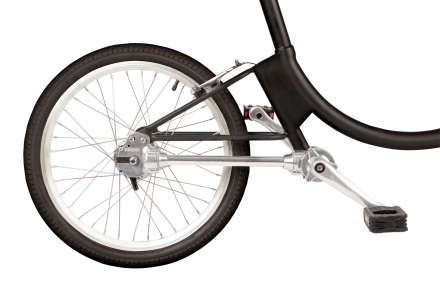 Shaft drive has benefits of durability and cleanliness (key for folding bikes). 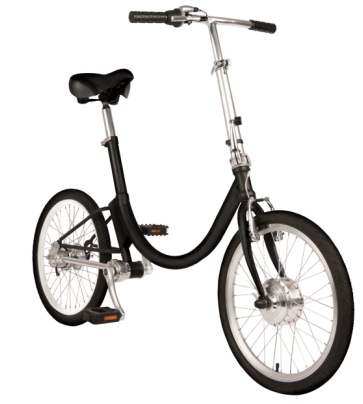 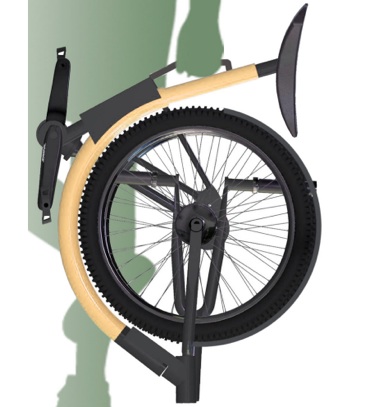 This bike and the company and people behind it, seem like the real deal to me (call it an educated hunch if you’d like). The bike boasts use of recycled aluminum for the frame (which makes it light and “70% more energy efficient to manufacture than virgin aluminum”), a shaft-drive which means no greasy chain, a battery pack hidden in the frame, quick and compact folding, an integrated front light, and more.

This is definitely a company to watch. If you’d like to ride one of the Conscious Commuter bikes, roll over to the “Cars in the Park” electric vehicle event at the Portland Art Museum (South Park Blocks) on September 10th.

Learn more background on the bike, including Wartofsky’s inspiration for it, on the Kickstarter page.

Thinking back 10 to 15 years ago…perhaps in the Bicycle Encyclopedia…there was a similar “U” shaped non folding bike that had one interesting design feature that may be desirable to add to this bike: two holes for mounting on vehicle racks (or wall or dispensing from a bike share system) for transporting when not folded.

That’s is the way of the future. Pedal leisurely on a sleek e-bike to your destination to simply fold it and forget it. No mess no hassle. No parking. No gas. No sweat.

I’m interested in the idea that this product solves the “last mile” problem for transit. For me, the down sides of transit have always been the waiting time on the platform, and the steamy fug that fills the cabin when it’s raining (i.e., most of the year). Getting the last mile or whatever to my destination on arrival has never been a serious concern.

Does the last mile problem resonate with others on the board?

Opus the Poet
Reply to  dan

Portland is different from other cities. Where I live “first and last mile” are THE major things that block people from using transit. Part of that is because for many people it is literally a mile or more from their homes to the closest transit stop, and from the closest transit stop to their destinations. Compound that with our weather (59 days over 100F this summer, “normal” is 35 days over 100) and you get a major barrier to transit use. I have to switch to a different bike than I normally use when I have to use multi-mode transportation options because my crank-forward comfort bike is too long to use the rack on buses here and just barely fits the hook on the train, so this folder would be great for me. I could ride a bike like that for a mile or so at a time without destroying what remains of my knees.

dan
Reply to  Opus the Poet

Wait, I’m confused. Do we both live in Portland, Oregon? If so, it must be really hot in your neighborhood.

Opus the Poet
Reply to  dan

Posting from Garland TX, the suburbs of Hell. And we hit 100 for the 61st day this summer today… A slight chill upon the air as we only got to 103F today.

This frame design looks just like the old Yamaha Qt50 scooters! Even down to the shaft drive…though plus the pedals of course.

I like the idea of batteries integrated in the frame tube as long as they are still user serviceable/replaceable. There are other folding e-bikes on the market (like the iZip Via), but this does seem to offer the promise of an even more compact folder (depending on whether this is 16” or 20” wheels).
One thing I notice on the prototype, however, is that it appears to be a non-folding proof-of-frame design…not a folding bike. I don’t see a locking mechanism on the rear frame or the swivel near the headtube that they show in the rendered version. Is this correct?

Hi J- thanks for commenting! Yes, this is a non folder- our prototype #001, used to prove design, validate frame strength, ergonomics, hard points and validate rider comfort across a wide demographic of body types. Prototypes #002 and #003 will be folders- due in early October.

i love that the frames might be made in pdx!

Good Eye! This prototype, our ‘Frankenbike,’ was created to validate ergonomics, hardpoints, and gauge rider comfort across a wide demographic of body types. We did source donor bike components in order to meet this objective successfully, at a low cost.

Like the shaft drive. Great idea for a folding bike.

What about push scooters? The go-ped and xootr, or the cheap razor a5 come to mind. All can board any bus or max when folded and are easily ridden for miles.

For those not willing to walk the “last mile” — I recommend a simple Razor scooter for $35. In Corvallis the most common “last mile” problem is the kids headed for the soccer fields that are 1/2 mile from the parking lot. Most of them (and a few parents) arrive with scooters and head for the field. You see a few skateboards and a few bikes — but far more scooters. Cheap, quick, clean, fun. What’s not to like? A several-hundred-dollar folding bike seems like extravagant overkill for a small number of affluent-but-socially-conscious-and-reasonably-healthy people.

I take it the drive is not fixed so you can coast? Also, will there be some gearing modification available?
It does look nice, though.

Hi Paul, you can coast, and this shaft system is compatible with all Shimano Nexus internal gear hubs. This prototype has a 7 speed nexus hub.
Gabriel

First good reason for a step-thru U frame: it matches the arc of the tire! I agree with whyat about the shaft. I need to see the price point. I am skeptical about a bike that folds in two places: notice that both wheels are folding into the middle. That’s a lot of folding! If one wheel folds from the left and one from the right, maybe the frame could be something more structurally efficient and save a lot of weight. Weight is king, even for folders. But I want to see this one in daylight. It looks cool!

Weight’s not king for me! I voluntarily went from a ~30 pound bike to a ~50 pound bike because of increased comfort and less maintenance hassle.

On the “last mile”: I caught non-bike commuters talking today at lunch about the challenges of using MAX. It is the last mile. A nonfolding bike adds its own issues during rush hour. A good folder might interest a lot of people. The price point will really matter. In my case, people want to get on and off the train at Goose Hollow or Jefferson and ride to/from Montgomery Park. Weight will matter for a non-athlete making the moderate climb on 19th from Raleigh to Couch after a hard day’s work. The folder is huge because if you have a regular bike you have to ride to Chinatown to board and find a hook, then endure the endless slog of MAX through downtown.

Is it possible to include fenders in the design?