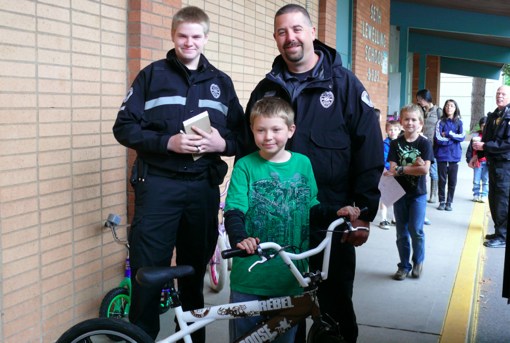 The Milwaukie Police Department just made 50 kids’ summers a lot more fun. Last weekend, led by Chief Bob Jordan, members of the Milwaukie PD gave away bikes and helmets to kids in several schools in the North Clackamas School Ditrict.

The bikes collect throughout the year at the station through being abandoned or otherwise forgotten about. After checking each one’s serial number to make sure it hasn’t been reported as stolen, and after making sure that the owner can’t be tracked down, the bikes are deemed police property. The police property room is commonly overflowing with unclaimed bicycles,” read an official statement about the giveaway. 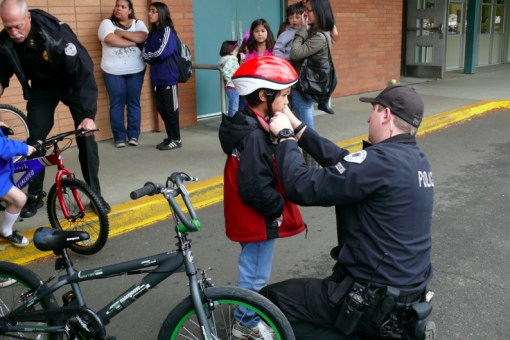 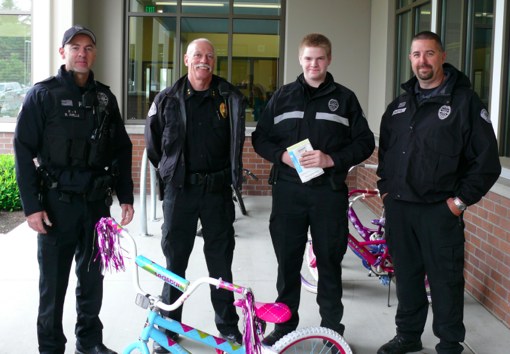 Abandoned bikes aren’t usually good enough to pass on, so a neighborhood shop in Sellwood, The Bike Commuter, stepped forward and volunteered their time to refurbish the unclaimed bikes. Once the bikes were given a clean bill of health, Chief Jordan got in touch with local school principals to match them up with kids in need.

The bikes went to students from Milwaukie, Lewelling, Ardenwald, and Linwood Elementaries and Rowe Middle School. Leslie Robinette of the North Clackamas School District says 44% of their students are on the free or reduced lunch program.

This is the second year the Chief has led this project. “After we piloted this project last year,” Jordan says, “a lot of people wanted to help.” said Jordan. That help came in the form of donated bikes and cash to buy new ones. With that support the police gave away 50 bikes this year after serving just eight kids last year. Next year, Chief Jordan says, “we’d like to do even more.”

— If you’d like to donate to this program, call the Milwaukie Police Dept. non-emergency number (503) 786-7400 or email jordanr [at] ci.milwaukie.or.us. They’ll start gathering bike donations for next year’s giveaway in the fall.

proud of my city…

Another reason why The Bike Commuter is my favorite neighborhood bike shop. Great partnership, guys.

uh… how do we do this in Portland? The Go By Bike Shop would donate some time fixing them up.

The Community Cycling Center gives about 800 refurbished bikes per year to kids and adults using almost all volunteer labor. Check them out at http://communitycyclingcenter.org

A similar program for adults would be great.

Again, the Community Cycling Center. They have a program (Create a Commuter) that directs bikes to folks who have a need (usually connected through a social service program) where one can get a good quality donated bike with everything it takes to safely and successfully commute. Included are a lock, panniers, lighting, helmet,rain gear,etc to insure that you can use your bike to get around instead of relying on cars and transit.

Even if these kids don’t become bike riders for life like the people on this blog it’s incredibly good for kids to get outside and learn that being outdoors is one-hundred times more fun than computer games.

Maybe the Police Activities League will lead a bicycle safety camp for the kids?

This is so much win. It’s a wonder more police departments don’t do this.

Don’t glorify the police this way, all of their PR stunts don’t make up for their abuses, and can’t ever justify their existence.

We ride against them.