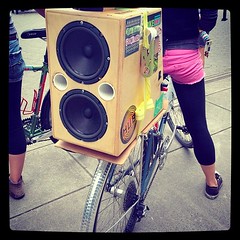 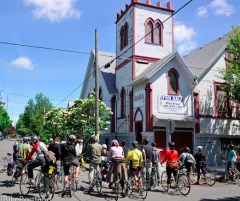 A bumpin’ bike, an exploration of neighborhood churches, and more.
(Photos © J. Maus/BikePortland)

We’re well into day six of the 2012 Pedalpalooza and there have already been tons of great rides and memories made. From Kelley Point Park at the tip of Portland to Helvetia out in Washington County, the streets, hills, trails, and alleyways have filled with smiling people on bikes. I’ve been to a handful of rides already and have heard and read about many others. Below are more photos and some notes that will help you get up to speed…

On Sunday I joined with Pasture Ted, Sister Carye and Brother Dan from the Bike Temple for the annual Joy of Sects ride. We met under the gazebo at Dawson Park, grabbed sticks of incense, and then listened respectfully as a member of our congregation read passages from the sacred text of the Bike Plan for 2030. 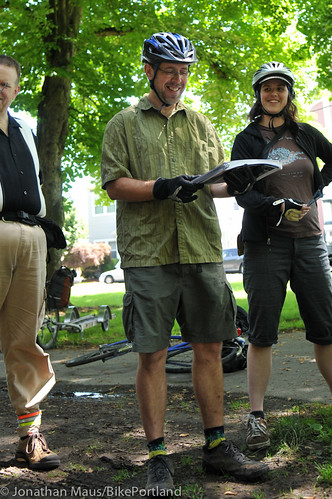 Pasture Ted then led to our first stop at Rainbow Outreach Ministries on N. Wygant and Rodney. The Reverend Charles McCleoud was out on the steps in a dark purple suit, energized by seeing dozens of people file onto his lawn with their bikes. “God is a great!” he was shouting, “Come on in!”

As we sat in the pews of his humble and beautiful church on a quiet neighborhood street, Rev. McCleoud’s warm voice boomed about how “The Lord wanted us to come together today!” He was very happy to see us. It felt good to be in the presence of a stranger who was instantly happy that we were alive and in his presence. “Got gave you those muscles to get up those hills,” he said, “He gave you sun and not rain!” (That last part got the biggest “Amen!” of them all from the crowd.) 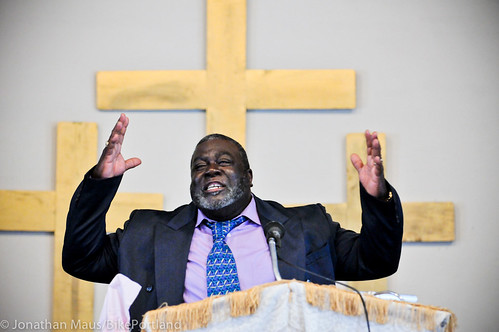 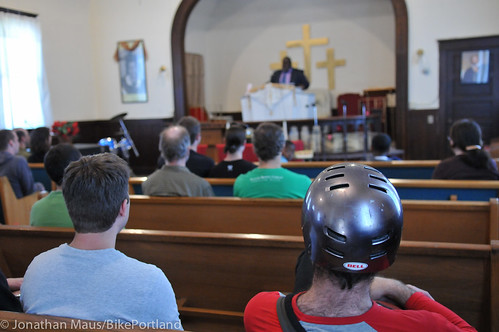 I’ll always think of Rev. McCleoud when I bike by that intersection now. And I might even pay him another visit.

After that it was on to a quick stop at the Bike Farm community bike shop. Pasture Ted described it as, “A secular center for bike self-healing.”

Next stop was the neat Xhurch (“X-church”) on the southeast corner of NE 20th and Going. The space is run by Matt Henderson and his friend Van Pham. Henderson describes it as a space for art, music and experimental religions. 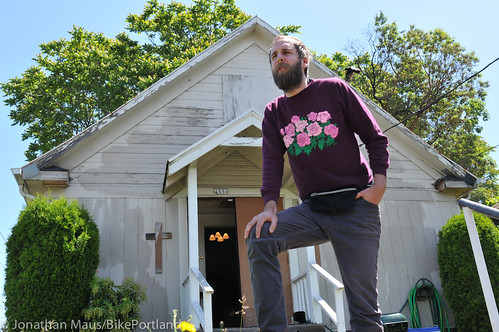 From the Xhurch I pedaled down to Irving Park to join my daughters on the Sprockettes Ride. The ride was the end of a two-day camp where they practiced dance and hung out with their Sprockette heroes. We rode up to King Elementary to enjoy a big dance number and watched the newly minted Sprockettes get introduced to the world… 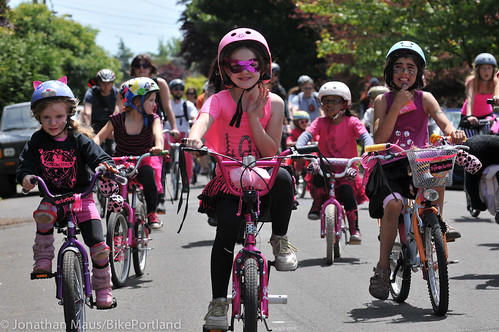 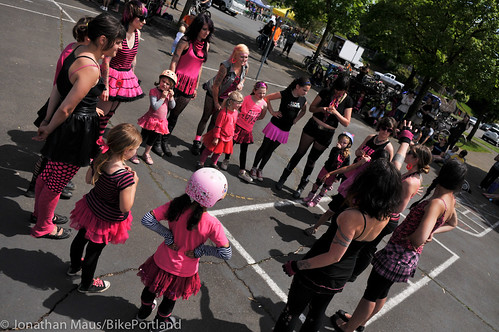 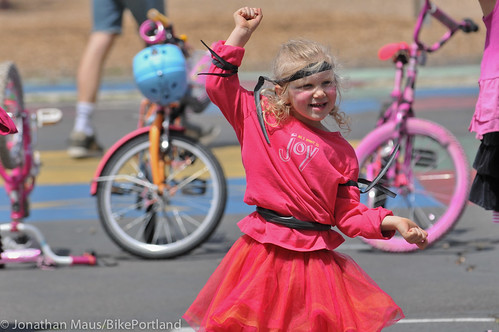 Fast-forward to yesterday and the debut of BikeBOT in Portland. BikeBOT is 28-year-old Andey Taylor and 31-year-old Brooke Robinson. This dynamic duo from Austin ditched corporate life and they’re now on a tour to promote bicycling and bike fun. They hosted last night’s Radio Ride and encouraged everyone to show up with mobile sound systems. The idea, says Andey, is to bring people together and make bicycling more visible. 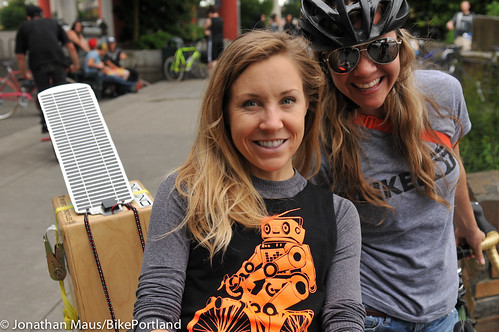 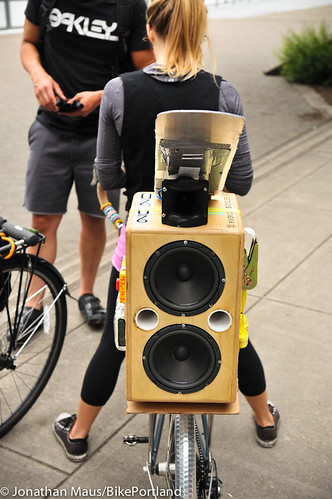 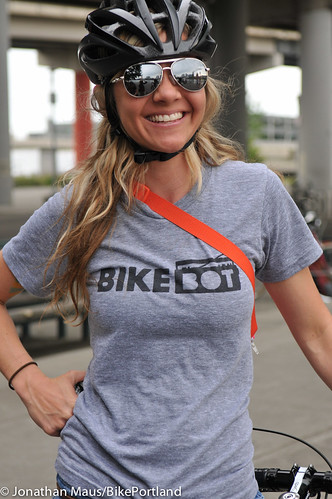 Mattheas Michael is serious about his bike stereo. He pulls a huge speaker in the trailer of a tandem he had custom made (by Adam George of BoundBikes.com) just to add an extra set of legs to help him heft the 300 pounds of sounds. His awesome set-up comes in handy at the monthly Portland Bike Party he hosts up on Mt. Tabor. 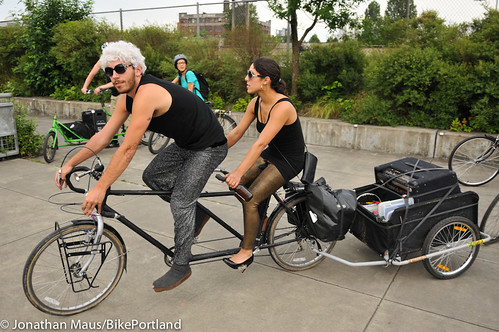 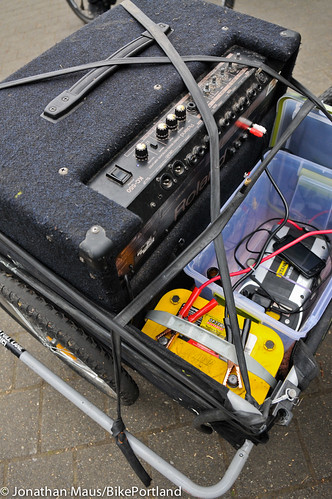 Other sound systems on the scene were Paul Jeffrey’s (remember him (he has a job now by the way)?) gorgeous white Bullitt with custom speaker boxes all around. He has even bought a set of pannier hooks from North St. Bags to attach speakers to his rear rack. Everytime I see this thing he’s added a few more touches… 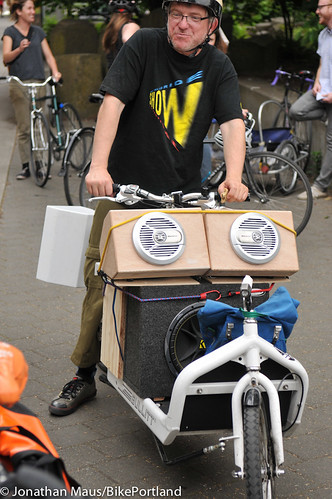 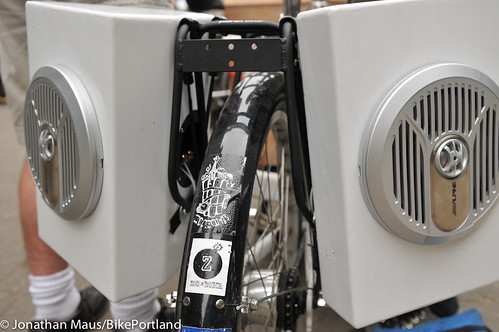 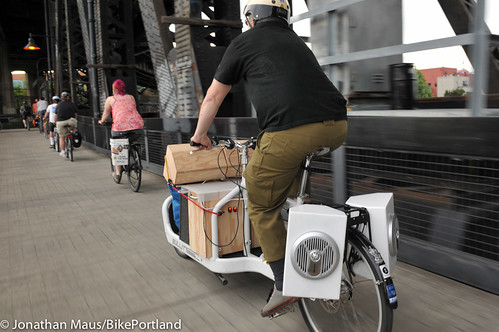 Here are a few more of the mobile sound systems on the ride. 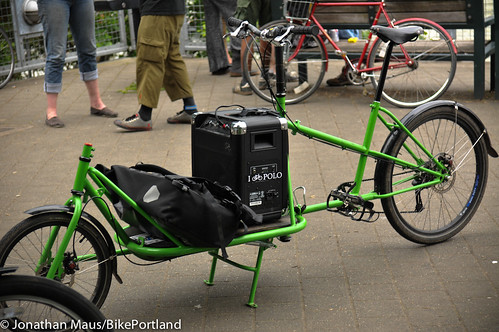 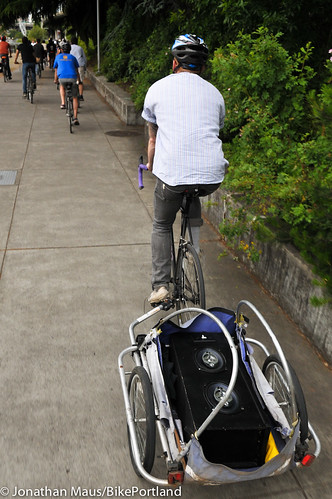 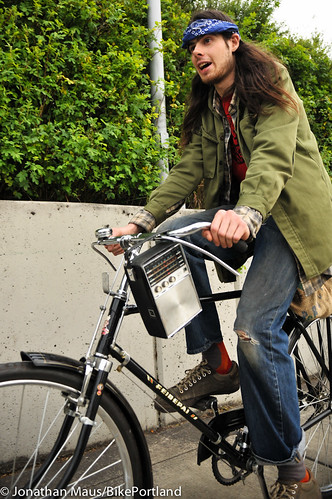 One ride I was sorry to have missed with the Cross Party up on Powell Butte. Here’s how that looked (via Moore Cycle on Twitter)… 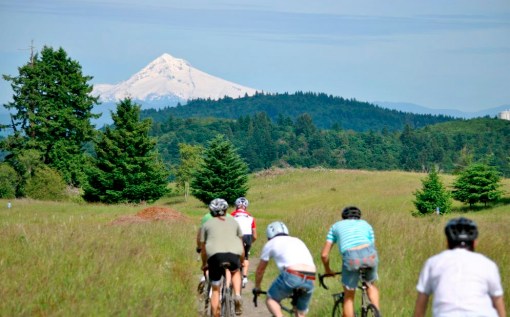 And there was also the Sunset Mystery Ride, the Morrissey Ride, a tour around Helvetia’s gorgeous rural roads, and much more.

There’s plenty of Pedalpalooza left. Check the calendar and get out there! (And don’t forget to share your reports and photos with us.)

Jonathan — glad you liked the Joy of Sects ride, thanks for the terrific photos.

After you left us we rode out to The Lumberyard, Portland’s newest Bicycle Shrine.