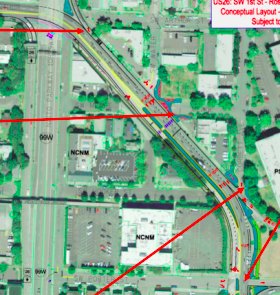 The Oregon Department of Transportation (ODOT) has just rolled out plans for a project that will improve biking and walking access along SW Kelly Avenue near US 26 and the western end of the Ross Island Bridge.

Along with project partners TriMet and the City of Portland, ODOT will make a host of significant changes along SW Kelly Ave., including the reduction of motor vehicle lanes, new median islands, new bike lanes, installation of rapid flash beacon, new crosswalks, a bus stop improvement, and even a new path to connect bikers and walkers to the forthcoming Gibbs Street Bridge.

ODOT project manager Robert Hopewell says they started looking at this area three years ago after getting feedback from local residents and business owners. After launching an in-depth analysis of how Kelly Ave was being used, Hopewell says, “We determined we had a facility that seemed out of date for what it’s being used for today and that we could remove a southbound lane on Kelly Ave.”

Here are a few images and notes from ODOT (captions taken from project website) describing what’s in store: 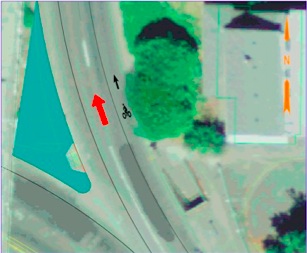 Reduces the exit to Naito Parkway from northbound Kelly Avenue from two lanes to one. 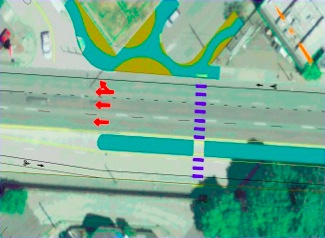 Constructs a cul-de-sac on Meade at Kelly Avenue. Drivers will access Meade via Water, Arthur & Corbett. Installs a Rapid Rectangular Flash Beacon and marked crosswalk on Kelly Avenue just south of Meade. Removes the inside southbound Kelly Avenue travel lane and replaces it with a raised concrete median island (from Meade to just south of Corbett). 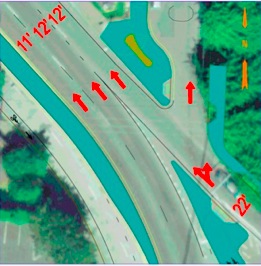 Restricts access to Corbett Avenue from Kelly Avenue for drivers traveling from the Ross Island Bridge – drivers will access Corbett via Water and Arthur. 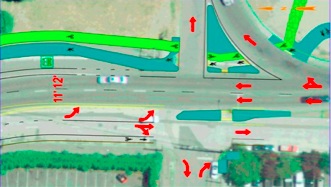 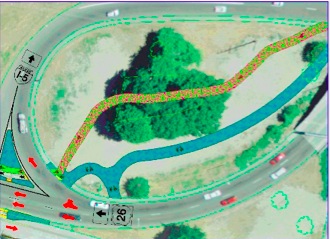 Installs a sidewalk with an adjacent planter strip that will connect to the new Gibbs Street Pedestrian Bridge.

ODOT didn’t have funding for the project initially, but spokesperson Shelli Romero says the agency had several recent projects that came in under budget so they allocated those savings to this project.

Estimated cost of the project is between $500,000 and $600,000. PBOT has also stepped in and will contribute around $40,000 to install a rapid flash beacon on Kelly Ave just south of Meade St. TriMet’s getting into the act too with a $20,000 contribution toward the bus stop improvement.

Construction is estimated to begin in November 2012 and wrap up by August 2013.

ODOT is hosting an Open House on the project at the National College of Natural Medicine (2717 SW Kelly Ave) on April 18th between 5 and 7:00 pm.

For more on the project, check out the detailed image below (click for PDF): 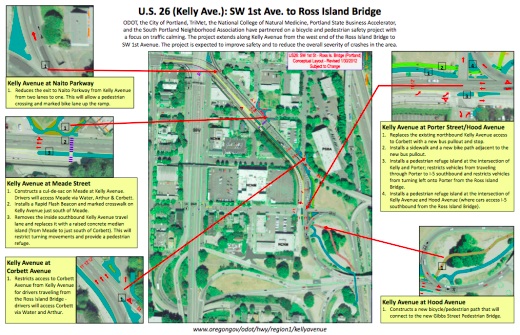 is it just me or is ODOT getting awesome?

No. It’s not just you. There are serious and significant changes happening at that agency in terms of shedding it’s highway-centric past. Stay tuned!

Perhaps ODOT is truly learning that they are a department of transportation and not a department of highways.
That and it’s more cost effective to facilitate small scale human powered transport rather than unnecessarily heavy single occupancy vehicles.

A couple weeks ago I had someone ask about bike routes from SE to the new Lewis & Clark counseling clinic on Barbur & Hamilton, and whether the Ross Island was an option. I laughed, told them to pedal down to the Hawthorne. It is certainly a nice development to see this question become less risible.

Still not sure if the Ross Island sidewalk will ever be a viable bike route; but if it were, it could really change the relationship between SE and Lair Hill/Johns landing, which are quite far apart by bike now, despite their geographical proximity…

i ride my bike
Reply to  Damian Miller

The crazy thing is the RI Bridge sidewalk is considered a multiuse path and is purple on bike maps!!!!

Improvements like that are always welcome! However, I don’t quite understand how the Gibbs Street Bridge connection works at it is not on the map.

I think it would be somewhat ironic+macabre if a large Earthquake hits after Gibbs St bridge is completed and it’s the only bridge standing. This has the potential to be the amongst the most critical focal point of the city in a disaster (also given OHSU’s location).

A super surprise for an area that most needed it! wow !

This area is the lone dangerous segment of my morning commute, so I welcome these changes wholeheartedly.

The Gibbs Street Bridge (over I-5) will start just south of the lower right corner of the map. It will connect Gibbs Street on the west with the lower tram terminal on Moody to the east.

This new path and the changes at SW Corbett and SW Porter will also make it much easier to get onto the sidewalk of the Ross Island bridge.

Are they actually adding a crosswalk at Kelly and Hood (bottom picture). The intersection is SCREAMING for some kind of a pedestrian overpass, as it’s right at the off ramp for Ross Island, where cars come ripping through the almost blind corner at about 40mph.

That said, this area has been a joke for access the last number of years, nice to see they’re starting to move in the right direction. How did the city ever let the connectivity and area around Ross Island Bridge get so bad?

Wow, these are great improvements to a messy and dangerous area.

The pathway to the Gibbs St Bridge looks like it will be an excellent feature. Nice work, ODOT. I’m still curious to know if the improvements will improve access on the south side near the east bound bus stop. Last I checked, the crosswalk terminates at a 2 foot curb and a bunch of bushes. I’ll come to the open house with plenty of such questions. It’s great to see them at work on this.

I like this and I especially like the traffic calming measures even when no bike or ped improvements are made.

I am somewhat incredulous that any organization with the word “business” in its name would support the removal of “vital auto lanes” for “frivolous recreational paths of dubious necessity” (devil’s advocate/channeling Oregonian writing).

I’m not. The whole neighborhood has the feel of having been teleported into the middle of a freeway cloverleaf. What parking exists is hard to reach, and very little opportunity for any of those drivers even to slow down. All the infrastructure is engineered for driving through, not stopping.

Also, has Japan yet made a violent gameshow called “Pedestrian Refuge Island”? Because they should.

As a resident of this area and near-daily user of these intersections, I can attest to the need for this. One of the real problems on the West end of the Ross Island is that neighborhood streets are used as connectors between major highways e.g. 26 and 43. It gets really ridiculous during rush hour. Strangely, it feels safer to cross these streets when they’re packed with cars, and thus not moving at 40mph.

It does seem a little surprising that ODOT is doing this, though it would be nice if they were instead doing something better, specifically implementing the South Portland Circulation Study and connecting Kelly to the bridge (going east) in exchange for removing the other ramps.

But in any case, I believe the Kelly & Corbett intersection is one of the high (traffic) collision locations, so it’s nice to see they’re doing something about it, and I know crossing the ramp to Naito can be difficult.

Thank God. This is one of the most impassable pedestrian areas in the city. Without running for your life the only way across is five extra blocks and a fun trip through a dark underpass. Kudos ODOT.

While Harbor Drive was removed in the 70’s, its extension, now Naito Parkway (so called), remains a expressway thru the heart of South Portland with freeway like ramps to the Ross Island Bridge. Long past time to remove these ramps, convert Naito to a local “main street” with retail, and put in a stop light for the street leading to the Ross Island Bridge. But patches on this terrible tear on the urban fabric are nice in the meantime.