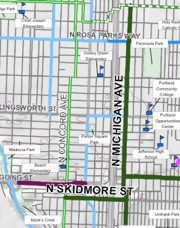 Tonight, the community will learn more about an exciting suite of projects that will make bicycling in North Portland more viable, convenient, and safe.

The Portland Bureau of Transportation will hold the first of two public open houses for their “Going to the River” project. The project, which includes a new multi-use path on N Going Street to Swan Island and new neighborhood greenways on N. Michigan, N. Blandena, and N. Going, was awarded $2.3 million in federal funding back in February. (For an in-depth look at the project, see our story from January.)

Combined with recently completed neighborhood greenways in the area (like N. Concord) and improvements coming to the Bryant Bridge and to Rosa Parks Way, people who ride near the I-5 corridor of North Portland are enjoying a much-needed boost in bikeway connections.

PBOT has planned two open houses for the Going to the River project. The first will present an overview on neighborhood greenways and existing conditions and the second meeting will present specific improvements based (in part) on community feedback. Details for both meetings are below:

Or you could show up to the Portland Building tonight and voice support for money towards a sullivan’s gulch trail! http://www.portlandonline.com/transportation/index.cfm?a=348992&c=39132

Thanks for the post. I went to the meeting, maybe 40 people in attendance, of mixed ages, races, marital states, preferred transportation mode.

A few folks were irked at the idea of speed humps, or of Michigan being chosen without any alternatives at this point, but most seemed to be bicyclists or bike/ped-friendly residents.

Lots of complaints about vehicles with Washington license plates driving too fast on Michigan, and they hoped the project would alleviate that.

I left the meeting with two questions unanswered —

1) How easy will it be to access the Swan Island Beaches by bicycle? They’re some of the nicest beaches in the region, and the maps showed no connection. I hope there is one, or that we can still get one in.

2) They proposed a “wrong way/wrong side” counterflow bike lane northbound on N Vancouver Ave from Going to Blandena. So where the right-side parking is now on this one-way street with bike lane there would be a counterflow lane. It’s unorthodox and “nonuniform” in a couple different ways — bike traffic on the route needs to crisscross itself at both ends, they’d have a section of street where bikes would “keep left” of center instead of “keep right.” With two types of unusual changes instead of just one, compliance and comprehension would be challenged, creating potentially dangerous conditions.

I suggested that the counterflow bike lane be raised on a curb, cycletrack style, for this half-block. Either on one side of the road or the other, but to create a physically separated corridor for the unexpected movement.

Great meeting, PBOT did a great job, and this is going to be a fabulous improvement to bicycling and walking in the area. Thanks PBOT!