The great news we reported last month is now official: The Portland Bureau of Transportation (PBOT) announced yesterday that they’ve received $2.96 million from the Oregon Department of Transportation (ODOT) for two projects that will vastly improve biking and walking conditions in North and East Portland.

The Portland projects are two out of 27 that the Oregon Transportation Commission (OTC) has decided to fund from a $20 million pot of federal “flexible funds” set aside specifically for non-highway projects. PBOT has received $2,090,372 for the Going to the River project and $870,000 for a project on SE 122nd Avenue. 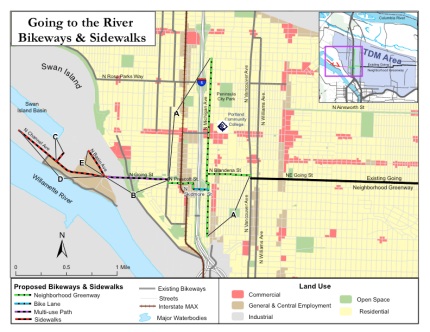 The Going to the River project will combine biking, walking, transit, and outreach components that are designed to improve access to Swan Island in North Portland. Swan Island is home to thousands of jobs, yet access quality for all modes is not equitable. With the flexible fund grant (and $240,000 from local sources), PBOT will add sidewalks, improve bikeways, improve access to light rail and fully connect the active transportation network around Swan Island. Construction is set to begin in August of this year. 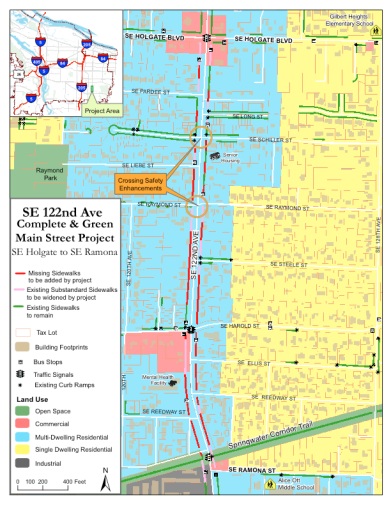 On SE 122nd, the grant will fund a Complete and Green Main Street Project that will do similar things as the Going project. SE 122nd is a key artery in East Portland and PBOT plans to make biking, walking and transit access improvements in order to not just improve safety but to, “stimulate economic development and private investment in the corridor.” Here’s a bit more from PBOT:

Total cost of the SE 122nd project is $3.35 million ($2.48 million is coming from local sources). Construction is scheduled to begin in August 2012 with completion by December 2012.

As we reported earlier this week, the OTC also awarded $2.1 million to TriMet’s Portland-Milwaukie Light Rail project, which includes $35 million worth of biking and walking improvements.

I’ll update this post with construction timeline estimates as soon as I hear back from PBOT.

The Swan Island TMA gives a big “Thank you!” to PBOT for taking the lead on “Going to the River;” we also thank the many other organizations and agencies that helped make it happen: Alta Planning & Design, Interstate Corridor URA Transportation Committee (PDC), Bureau of Environmental Services, Vigor Industrial, Community Cycling Center, BTA, and Swan Island Business Association among others.
“Going to the River” is a big win for better access to the thousands of jobs on Swan Island as well to the loveliest mile of riverside trail in the city.
My fingers are crossed that we will see construction this year on both “Going to the River” and the Waud Bluff Trail. Making it possible to get to work on transit, bikes or even on foot keeps freight moving.

Congrats Lenny! You have worked hard to see this project come to fruition.

and thanks to my friends at npGreenway as well!

Wow, never expected 122nd to get improved. It’s going to be a challenge.

-The road seems to narrow the further South you go with parked cars right up to the bike lane.
-Bike lane disappears going up to most intersections to make way for a dedicated right-turn lane and some motorists react aggressively when merging into one of the main travel lanes. I don’t know if that’s by design or if it’s simply the bike lanes being worn from weather and studded tires.
-Road surface is extremely uncomfortable for cycling, especially through intersections.
-Conflicts with buses

It’s a nice fast route if you drop the tire pressure down, don’t mind a bit of Trimet leapfrogging and the odd honking motorist. I take longer, less stressful routes now, but will certainly try it again after the improvements.

The Swan Island Bicycle Commuters also say a big “Thank You!” to all for these much-needed updates. Now if we can someday get through along the riverside ‘cement road’ southward there would be “world-class titanium/platinum level” worthy access to all these jobs from downtown and points south. Let’s extend the popular Eastbank Esplanade northward!

This should make my trips to the FED EX shipping center much safer. Traffic on Going is outrageously fast with many drivers driving at freeway speeds.

While smaller in scope, both projects are very welcome first steps to larger problems. Improving access across Basin to the jobs on Swan Island is most helpful. And 122nd is such a long, wide and high speed obstacle to safe bikeing and walking, almost anything would be an improvement.
Soon construction will begin ( Finally!!) on the Waud Bluff trail, and with Going to the River, there will be large improvements to safe Swan Island access. Many thanks to Lenny @ Swan Island Transit Management Assoc, for banging the drum on these projects.. and PBOT for their work here and around the City.
With 122nd, again, a good first step. Like many corridors around the City, esp in East Portland, there are so many wide fast streets that bisect and create huge obstacles to achieving connectivity. This part of the City has huge, unrealized needs for safe connection, community commons and transportation parity. When it was annexed into the City, Portland also accepted providing the same services the rest of the city enjoy.
I am a member of npgreenway, and welcome those bits and pieces that will someday comprise one of the finest transportation/recreational trails in the Country. At the same time, we are all in this together, working to build those community assets that will help insure transportation for the entire City. Outer East Portland needs a lot of loving too.

I’m very excited to see the addition of the N Michigan greenway. As a student at PCC, I’ve been wishing there were a bike boulevard going by campus, as the nearest bike route is currently Vancouver/Williams, which requires a somewhat dangerous ride on Killingsworth.