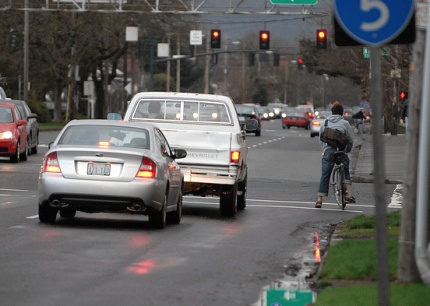 A project to improve conditions for bicycling on N. Rosa Parks Way between N. Vancouver and Interstate seems set to finally get underway. Bureau of Transportation project manager Winston Sandino says they’ve selected a contractor and the project is slated to begin in May.

Here’s a breakdown of the changes coming, according to Sandino: 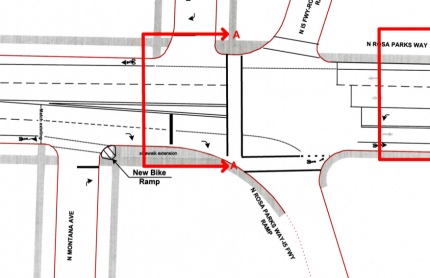 This is welcome news for neighborhood residents (myself included) because existing conditions on Rosa Parks — especially as it crosses I-5 — are very inadequate. There is no shoulder and bike access across the overpass and into the popular New Seasons market at Interstate and Rosa Parks is challenging even for confident riders.

The Rosa Parks project was awarded a grant in April 2008 and it has been beset by delays ever since (it was one of five delayed projects I profiled back in August).

Looking west on Rosa Parks Way as it crosses I-5.

The delays occurred in large part because the project modifies lanes and signals that feed onto I-5, therefore ODOT had to sign off on the designs (PBOT will also relocate a light pole that is on state right of way). A key issue was ODOT traffic models that showed the signal at Albina and Rosa Parks might cause traffic backups that could impact I-5 on-ramps.

Even with a project that turned out to be more complicated than everyone thought, it still seems like three-plus years is a long time to make this project happen. In late 2009, I asked ODOT rep Lou Torres about the delays. Is the process broken? Can it be streamlined to prevent these delays in the future? “I think that’s a valid discussion topic, no question about it,” Torres replied, “We’ll be very happy to have it finished… it’s been on the table for a while.”

So will we Mr. Torres. So will we.

— In other good news, PBOT plans to build a new crossing treatment at Michigan and Rosa Parks as part of their Neighborhood Greenway projects in conjunction with the recently funded Going to the River project. More info on that to come.

I’m excited to see the improvements finally arrive. I brave the street as it stands now but crossing the overpass can be a hit-or-miss experience as a cyclist depending upon the care of other users of the road (e.g. whether or not “pinches” occur during close passings).

Glad to hear it’s finally moving on – this will be a welcome improvement for Piedmont and Arbor Lodge residents.

I had no idea this was going to happen, but I think it is very needed and am glad. I always take the lane when I ride over I-5 as I’m familiar with the area and the pinch point, but I see plenty of newer riders not do this and get squeezed out by cars. Though squeezed out is the wrong wording since the foot tall curb prevents cyclists from bailing off the road, I guess better wording would be “put in mortal danger”.

“…more complicated than everyone thought…”

…And (IMHO) way more complicated, expensive, and dangerous than necessary.

Granted, I do not live or ride in this area, but I encounter a similar intersection of a high-speed arterial (Murray Blvd.) with a freeway on-ramp (to Hwy 26)–not to mention an intersecting road just before the on-ramp (similar to the position of Montana just before R.P. meets I-5), and I ride it with virtually no trouble every single workday. How is it striped? with a bike lane that merges in a straight line (not a zig-zag) across the right-only freeway entrance lane and continues on over the freeway. There are no special signals, no diversions onto sidewalks, just riding straight through. I’ve never even been honked at.

I also occasionally encounter an intersection out west here (Baseline and Stepping Stone just E. of 185th) that has been given essentially the same treatment proposed for R.P. and I-5; I ignore it any time I ride through there.

What part of “Don’t put through bike traffic to the right of right-turning traffic” do engineers not understand?

My assessment of the proposed plan:

Creating a right-turn-only lane onto the freeway is good, that way only one lane of auto traffic will be speeding across the intersection.

Putting the bike route to the right of this lane is bad. No amount of special signalization is going to a) prevent drivers from thinking they can still turn right on red, b) prevent drivers from getting confused by the bike signal, thinking it is their signal, c) (if the bike signal can be hidden from drivers), soothe the ruffled feathers of drivers who will grow angry at all the “scofflaw” cyclists crossing the freeway entrance “on a red”.

To me (again, my opinion only), this seems like the kind of thing that costs bazillions (ok, maybe only hundreds of thousands) of dollars that the public looks at as money spent to coddle a minority of road users. Then when the design proves to be a major hassle–even dangerous–and cyclists or others complain about it, it becomes a case of either “look at all the money we spent on you, and all you can do is complain about it, you spoiled, whiny, freeloading, arrogant asses!” Or, “For all the money we spent on this, all that happened was we made things even more difficult to navigate–and all to accommodate those spoiled, whiny, freeloading cyclists!” This, then, does not predispose the non-riding public to be in favor of spending on real improvements. Not that I necessarily give a rip what the non-riding public thinks, but it can generate unnecessary ill-will.

My proposed plan would be to separate the through lane from the right-only (onto the freeway) lane as early as possible, and gradually merge the bike lane across this lane so that it would run for at least a block or two between the two “car” lanes. Even simpler would be to just mark the rightmost lane “RIGHT TURN ONLY (EXCEPT BIKES)”. This could be done with paint plus an arrow lens for one of the traffic signals, plus “RIGHT TURN ONLY” signage. If you want to add physical improvements, make the right turn onto the freeway more of a right angle to discourage high-speed turns, forcing auto traffic that needs to both merge with bike traffic and turn right to slow the heck down and do it safely.

So as not to be a complete Negative Nellie, this plan makes some good physical improvements, and looks like it will be great for peds.

I tend to agree with you. A simple, perfectly workable solution would have been to make the right-hand turn lane well marked with sharrows, “Right turn only except bikes,” and “bikes in roadway” signage from Montana to the bridge.

The reason drivers get aggressive through here is the signal lights are so long and screwed up. Fix the signal timing, which would easily happen by making Montana right hand turn only with just a stop sign, and people would be a lot more chill.

I want to know why they are using full-width 12′ lanes, when narrower lanes would suffice, leaving room for such improvements.

Can’t wait for this! Glad to see a sidewalk extension is going in as part of making the sidewalk a shared-use path. Well done, PBOT!

They are removing an eastbound motor vehicle lane from the bridge!?! Wow!

I’m glad for the general upgrades here, but what is it with PBOT and putting bikes to the right of right-turn-only lanes? It’s inconsistent with general traffic flow rules, and it requires a relatively large expense (signals, bike boxes, and here, extra MUP infrastructure) to achieve even levels of compliance that still mean people riding through are regularly endangered by people driving who run their red signal, when moving the bike area out would avoid the issue. I always hear people say that this type of merge makes them nervous or seems dangerous (though I don’t know that it actually is; it’s a maneuver that anyone who does much riding has to get accustomed to under present conditions), but I’ve never seen a case where PBOT even proposes creative installations that might make it more comfortable for those who are concerned – instead, they go straight to the problematic option of keeping bikes on the right.

Newsflash: Portland isn’t Holland and riding through a freeway intersection like this is not the same as puttering along a bike path on the canal in Amsterdam.

Do it better PBOT; bike lanes should not be installed to the right of a right turn only lane. Ever.

Would you rather have it like how broadway used to be? With the bike lane mixed up in the turn lanes? No way, Bikes are much safer to the right of the lanes. Keep your head up when you go through the intersections, you can get clipped the same at a 4 way intersection as at a right turn lane intersection, people blow the reds the same either way.

I agree with every single word El Biciclero wrote. His links are great too.

It seems like the mandate for this design was “how can we spend as much money as possible????”

The striping shown in his first google maps link is perfect.

The only change I would do is make the right turn into the ramp less smooth. That way, acceleration can only happen on the ramp, and not the road leading to the ramp.

Sounds like I’ll be ignoring all this new stuff and riding it like I currently do: by taking the lane.

the trouble with taking the lane after this is built is that, if you are hit there, you will have very little legal recourse, since you would be riding illegally in the lane because of the mandatory bike lane/side path law (ORS 814.420).

PBOT should not be building this, or any facility like it, until after ORS 814.420 is repealed, so cyclists have a legal choice not to use these unsafe facilities.

Why stop at Interstate? It should go just a little further and connect with Willamette. That would also let the kids get to the greenway on Concord on their way to school. Typical Portland leaving holes in the bike routes.

MIddle of the Road Guy

I still hate the name change.

beth h
Reply to  MIddle of the Road Guy

You should call the guy who’s still trying to “Save Union Avenue” (for something over 20 years now, I think).

Eventually these things get forgotten and then they are gotten used to. Give it time.

I’m very glad to see this come to my neighborhood. Thought, trying to navigate construction through that zone should be interesting…

So please don’t ride your bike on the sidewalk anymore. Walk your bike if you have to. And certainly don’t scoff at me for walking in the sidewalk with my children. Sidewalks are for people. If you are on a bike YOU need to yeild, not I.
please

They just did the lanes this past week and it’s GREAT, although it is a bit confusing initially to be directed onto the sidewalk for half a block and then back over to the street. But for Rosa Parks which has never been a crowded road for cars, it’s great to see that section down to one lane – especially in the winter when the standing water normally forces cyclists into the car lanes which is scary for all of us!