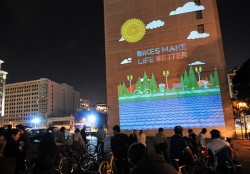 
Bikes Belong invited me to L.A. last month to go behind the scenes on this project. While there, I got to chat with John Frahm, account executive with Colle+McVoy, the creative firm that created the People for Bikes campaign and that oversaw production of this video.

“When they came to us initially a year and a half ago,” Frahm said, “they said we really want to do a movement to unite the masses. Something that breaks down the walls of all these different advocacy groups.”

But that was then. With one year under their belts and well over 200,000 signatures on their petition, People for Bikes needs to get beyond the bike. 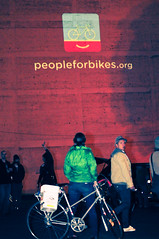 Frahm said so far they’ve focused on people who are already for bikes.

“Over the last year we’ve really spent focused on the endemic people; launching at the Bike Summit, then going to big events like Sea Otter and having displays in bike shops. Now we’re at the point where we’re trying to break it out into the masses.”

“It’s all about trying to seed it online and put it in front of people outside the bike industry and advocacy world. This is the first big thing we’ve done not solely served up through a bike filter… The first time we’ve tried to focus on building something that’s going to be sharable outside the industry.”

Frahm says the goal of the video is to, “… demonstrate how bikes improve life.” “Hopefully,” he adds, “people will take this and find something they identify with and use it to help build awareness and spread our cause.”

People for Bikes is taking the lead to create a national groundswell of support for bicycling. It’s no easy task; but branding and communications will play a huge role. I think the video makes a simple — yet important — point that’s often overlooked; that just by hopping on a bike good things happen to you and the world around you.

We’d love to hear what you think about it…

Sure, nice video, but it bothers me that almost no one is wearing helmets or using lights on their bikes, even though they are riding at night. Not the image you want to take to the general publuic.

it was kind of refreshing to see people biking without helmets, almost like the real world. reminds me of the videos european cities make to promote bicycling; where people look like they are enjoying themselves. I don’t really see this video going “viral” or getting more people to ride bikes who otherwise wouldn’t. The scene of the highway (or what they call a neighborhood street in LA) with no cars and only the group of people on bikes is nice and I’m sure lots of people would bike if the streets were like that but they are not.

Great video and truly captures the freedom and emotions of riding. Filled with great visuals.

I wanted to like it – I really did! But I couldn’t help cringing at all those people riding at night with no lights on the sidewalk. I can get over no helmets, but that just couldn’t resonate with me. OK, you can call me a grinch now.

It’s just a movie. don’t everybody take everything too seriously. It took me back to being the wild-child on my balloon-tire-bomber, filling up my senses with the wonder of the nights, the sights, the sounds & smells wafting through my head, gravity & gyro-energy weaving the whole experience together. It’s what its all about. Wonder.

Except, it’s not being used as “just a movie.” It’s supposed to “help spread our cause,” and I don’t think seeing a bunch of unlit bikes ridden on sidewalks is going to win over many people to how bikes can make their life better. The more likely reaction from those who are not already believers is, “there go those damn scofflaw cyclists again….”

Feels like a “miss” to me. I am a bike advocate and it does nothing to get me stirred about bikes.

Even though it’s selling a brand, this video by Planet Bike does a better job of making the choice of using a bike to get around much more appealing and seemingly universal: http://vimeo.com/20069909

But a bunch of those people aren’t wearing helmets either.

Really thought all safety advocates need to realize that not everything is literal. I think both these videos are effective about expressing the joy of riding bikes. Let’s get that message to people first. We can worry about the helmets and lights issue later. Geez.

Jessica Roberts
I wanted to like it – I really did! But I couldn’t help cringing at all those people riding at night with no lights on the sidewalk. I can get over no helmets, but that just couldn’t resonate with me. OK, you can call me a grinch now.

I’m with those who don’t get it. I also can get over no helmets, but the lack of lights immediately jumped out at me and put me off the video. It does, however, emphasize just how hard it is to see an “unlit” bike in the dark.

If they make a video during Sunday Parkways then that would be a great visual of how non-motorized transportation is fun and good for everyone.

love the concept, but the sidewalk riding (yes i know its just a movie and i shouldn’t take it literally), reflexively bothered me.

its a big undertaking to try to bring bikey folks together and I applaud their effort. i can’t even begin to conceive of how you try to communicate that

i found this video recently, made by Travel Oregon of all people, that made me want to hop on a bike that very instant!

it may not be “cool” but you just gotta show helmets. wearing a helmet shows personal responsibility and is one way bicyclists earn respect from car drivers.

yes on the whimsical illustration and the idea that bikes make life better. check it out in this TV ad for GetAbout Columbia, in Columbia, Missouri: