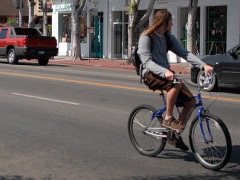 Last week I received (and accepted) an invite from Bikes Belong (a national bike advocacy non-profit) to watch first-hand as they take the next step in their People for Bikes campaign.

Tomorrow morning I’ll head down to Los Angeles to be present at the filming of a new video they’re working on. It’s called “Bikes Make Life Better” and it’ll be released at the beginning of May to coincide with National Bike Month.

The video will be the latest push by People for Bikes to garner signatures in support of bicycling. Since they launched in 2010, over 210,000 people have signed their pledge. With a snazzy new video (more details tomorrow), the hope is that word of the campaign — and of the benefits of bicycling — will spread even further.

It makes sense to shoot this video in L.A., a city where bike culture is beginning to rival its legendary car culture.

The Mayor of Los Angeles, Antonio Villaraigosa has helped urban biking get into the news by pedaling around himself (unfortunately, not always staying upright), and by launching an ambitious bike plan. This past weekend, 100,000 people are estimated to have taken part in the carfree CicLAvia event (like our Sunday Parkways).

If you’re in or around L.A. tomorrow night from 7:00 to 10:00 pm, join us for a street party at the corner of 5th Street and Olive, across from the Pershing Square Metro station. Bikes Belong is hosting and there will be free food and music from local DJ’s.

Stay tuned for reports from L.A.

If LA can kick the car addiction, it can be done anywhere.

Sign the pledge….We should have 200,000 signatures from Oregon alone!