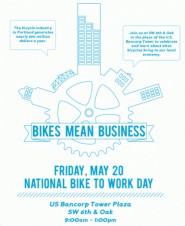 The speakers have been announced for the National Bike to Work Day event being hosted by the Bicycle Transportation Alliance (BTA). The event is dubbed “Bikes Mean Business,” and it will feature a trio of local business leaders who will expound on the benefits biking brings to the bottom line.

In addition to Congressman Earl Blumenauer and Portland Mayor Sam Adams (who has been sporting a “Jobs” pin on his lapel lately), the event will feature Chris DiStefano of Chris King Precision Components, Jennifer Nolfi of the Portland Development Commission (PDC) and Randy Miller, President of the Produce Row Property Management Company.

The timing and theme of the event are interesting given the recent kerfluffles in the Lloyd District where business interests (including the PDC) have stymied progress on several projects over concerns about perceived negative impacts to motor vehicle access (an update on that coming later today).

We’ll likely hear a much different tone from the speakers next Friday (5/20). 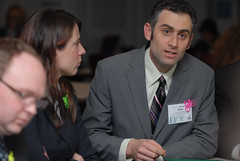 DiStefano does marketing and public relations for Chris King, which is the largest and most well-known bike company doing business in Portland. Since moving to the Northwest Industrial District back in 2003, the company has flourished. In the past, DiStefano has been a vocal proponent of off-road bicycling, saying that more of it could be a boon to the local bike industry. 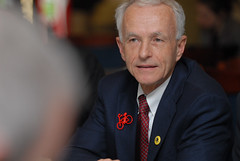 Randy Miller (whom I am long overdue to sit down for an interview with) has become an “unlikely advocate” for bicycling within the business community in recent years. A highly respected and visible leader in regional business circles, he has been outspoken in support of strong bicycle policies in the Bike Plan for 2030, he has attended the National Bike Summit several times, and recently became a board member of the BTA. 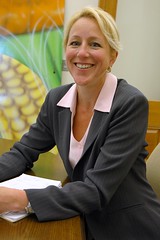 Jennifer Nolfi is a business development specialist at the PDC. She has been a supporter of our local bike industry since 2006. Nolfi has worked with local framebuilders and others bike business owners to promote their work and give them tools to succeed. In 2008, she was instrumental in getting an exhibition of handmade bikes prominently displayed at the Portland International Airport.

I find it amusing that if you go to this event you miss your chance to bike to work… unless you work in the afternoon/evening… (:

Does the PDC have a brain controlling all those tentacles? Yesterday’s performance at the Lloyd SAC was apparently jaw-dropping for everyone on the committee.

yep. PDC is happy to grab the bike-friendly headlines for a PR stunt, but when it comes to infrastructure they capitulate to ‘the business interests’ who won’t give up a few car parking spaces. Bikes do mean business, but not just one day a year.

Thanks for keeping track of all this, Jonathan.

Maybe there should be a cost associated with those little bike pins. If you wear one, you have to pledge to actually, you know, support bikes and bike infrastructure.