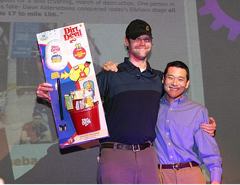 Members and leaders of the Oregon Bicycle Racing Association (OBRA) had a lot to be happy about in 2008. Year-end stats from OBRA officials show that there were 3900 licensed riders at the end of the year — a 13% increase over 2007.

Numbers aside, much of what makes OBRA a success is that they focus on fun. That was on full display when racers and everyone that keeps OBRA ticking got a chance to relive the successes, the pain, the fun, and the camaraderie of 2008 at their annual meeting and awards banquet on Saturday in Southeast Portland.

As usual, the event recognized 2008’s best racers and best teams in a variety of categories and disciplines. In addition, this year OBRA unveiled a new set of “fun awards” that included such honorable titles the “Best Crash Caught on Film”, “Biggest Fan”, and the “OTB Award” which was given to the best story about finishing last or near-last in a race (a.k.a. being OTB or “off the back”).

Another highlight of the night was this 4+ minute video montage of racing action from throughout the year:


At one point in that video above, a quote flies across the screen that says, “Being a bike racer in Oregon, is like being a mouse in a cheese factory.” As we’ll see below, year-end stats from OBRA back that up. 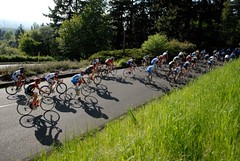 In 2008, the biggest growth came from participation in cyclocross (not surprising, given that the Cross Crusade series grew 25% this year). In total, 888 riders signed up for a “cyclocross only” license. That’s a whopping 47% increase from the prior year.

Road and mountain bike racing also saw an increase in ridership of about 7% each.

Other notable jumps in participation were seen in the number of Women racers. In 2007, there were 566 women licensed to race on the road. That number jumped nearly 27% to 717 women racers in 2008.

I watched every minute of Dave’s OTB at Elkhorn on stage 3….soul crushing…he deserved something for simply staying upright and finishing. Little mentioned fact…he was racing again two days later at PIR….

Yup. Remember we had that beer waiting for him. 😀