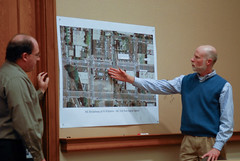 The Office of Transportation has struggled for years to figure out how to safely manage bike and car traffic flow at the intersection of Broadway and Williams.

Following two fatalities due to right-hooks last fall, PDOT placed the intersection on a list of the 14 most dangerous in the city and initially planned to install a bike box. However, after further study of the intersection, it was determined that a bike box would not be a good solution at this location.

Further analysis (presented by PDOT back in March) showed that a separate traffic signal phase for bikes and for cars might be the best solution, but no plans had been confirmed and a fix was still needed. 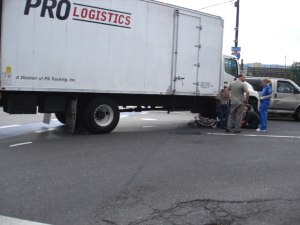 This collision (notice the bicycle under the right front tire) at
Broadway and Williams on September 25th helped
put pressure on PDOT to improve the intersection.
(Photo: Carl Larson)

Then, just a few weeks ago, a potentially tragic right-hook collision occurred at this intersection. After a report surfaced about that crash, many community members emailed and called the Bicycle Transportation Alliance (BTA) urging them to advocate for something to be done.

The BTA contacted PDOT and now the intersection is once again a hot topic and it seems like a solution is finally imminent.

The City’s head traffic engineer Rob Burchfield, along with PDOT traffic operations specialist Matthew Machado, presented their latest ideas for how to tackle this issue at the Bicycle Advisory Committee last night.

Here are the three design options that are currently being considered: 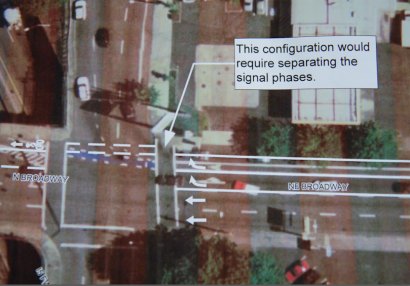 This option would add a separate bicycle signal phase (meaning bikes would have their very own signal), the bike lane would be moved curbside (it is currently between two car lanes, one of which can turn right), and the two motor vehicle lanes would become right-turn only. They might also add an advance stop bar to the right-turning auto lanes.

Burchfield says they’re very concerned about two things with this option; compliance of motor vehicles with the no right turn on red, and with bicyclists who might not comply with a red light. With about 1,200 cars per hour turning right onto the freeway at this location, Burchfield cautioned that, “You would not want to run that signal.” 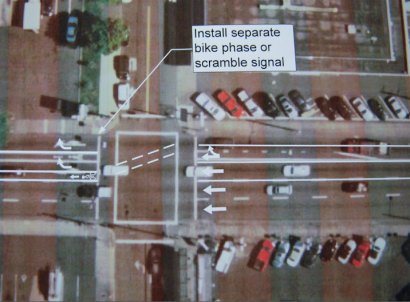 This option would install a bike-only “scramble” signal at Victoria Street that would direct bikes from the curbside bike lane across the intersection. At Broadway/Williams, the bike lane would be to the left of both of the right-turn only lanes. 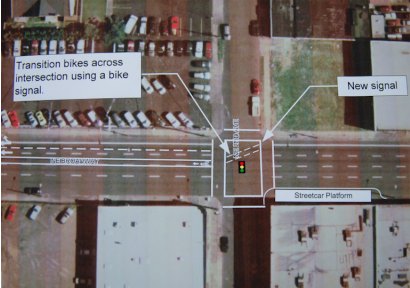 This intersection is just two blocks further east of Victoria. A new signal is planned at this intersection (due to a new Streetcar platform that’s coming) so the idea would be to add a bike-only “scramble” signal that would function similar to the option above.

A concern voiced about this option is that it would put bicyclists in the middle of multiple lanes of motor vehicle traffic for three long blocks — not a comfortable position for all cyclists.

Fresh off a trip to Copenhagen and Amsterdam last week, traffic engineer Burchfield said he thinks the Williams Signal Option would be the “most comfortable” for bikes (once a few details are ironed out). But, he added, it would mean that bicyclists would face longer and more frequent delays.

A subcommittee of the Bicycle Advisory Committee is meeting to discuss this project and the plan is to report back next month. Burchfield says funding is available and construction could start once a design is decided on.

UPDATE: A few commenters have asked why removing one of the right-turn lanes on Broadway is not an option. I asked the same question of Rob Burchfield at the meeting on Tuesday night. Below is a recording of his answer:
[audio:http://bikeportland.org/audio/bwaywililams2.mp3]
Link to MP3

Personally, I’d rather have to wait a little bit for the signal than to have to be crammed between multiple lanes of fast car traffic.

And I’m a reasonably experienced vehicular cyclist. I know people less skilled than I am would probably just not bike at all if the 2nd or 3rd options were implemented.

I am not going curbside inside two right turning lanes. while I do understand that the current arrangement is not comfortable for some cyclists, I have no problem getting pretty far left in the second lane, so that I am not inside any right turners. the only difficulty (apart from the adrenaline rush when you do this maneuver in high traffic volume situations) is that there is a perception that since I am not in the striped bike lane I am somehow doing something wrong. the scramble signals and the diagonal across the intersection all look bogus to me. why not limit right turns to the outer lane only?

I think the 3 current fixes are the evidence of closed minds. Why not look at 15 different fixes. The 3 current proposals may cause more harm than good. I think PDOT needs to open their mind to more than 3 limited options. We put a man on the moon in 1969, we can do better on this. What if the current bike lane was kept and both sides of the lane was lined with those 3 foot tall plastic orange tubes to protect the bike. Why not try a good pavement sensor in the bike lane that triggers a red right turn arrow. What about a green coated bike box and lane. Why not post big old 10MPH speed limit signs on the curve. You see curve speed limits for cars all over windy roads. Why not put SLOW markings on the pavement. Why no “yield to bike” signs? Why not all my ideas in this paragraph? There are so many good and low cost ideas left off the table. Yes the orange tubes would need replacement once a year, but that costs a lot less than a right hook death. Why does PDOT think so narrow, as if this is a small multiple choice answer. This better solved with open minded thinking.

As a vehicle driver i do not like even driving this section with other drivers turning even without having to worry about scanning for bicyclists at night or in the rain. As a bicyclist it is even worse.

Yeah, funny how the one obvious solution – remove the second turn lane – isn’t on the table. Is it really necessary?

RE: removing one of the right turn lanes.

I asked Rob Burchfield that question at the meeting.. I also happened to have recorded his answer.. I’ve posted it in the post above.

Thanks Jonathan for the update. I guess I just don’t see a large enough volume of cars turning from the outside anyways, but maybe it’s just the timing of when I pass through. This is just going to be a mess with the street cars. I hate street cars. I’d rather see more busses.

Since I can’t hear a word of that audio clip (noisy work environment), I’ll just assume it wasn’t worth transcribing. Cut the second turn lane.

OK, which option restores the crosswalk on the north side of the street? I’ll vote for that one.

Cutting the second turn lane would certainly help, but then you’d still have a right turn lane full of thousands of anxious, accelerator-happy drivers merging across a bike lane…I think a separate bike signal would be better than that.

I’ve certainly seen this kind of separation-in-time in these situations in Europe.

Rob’s answer regarding the need for two right turn lanes was a great example of someone talking and not saying anything.

I agree with Joe Rowe that the DOT is being pretty small minded about this whole situation. Why is timing of the light and rearrangement of the bike lane’s position the only options? What about sharrows in the outer turn lane? What about moving the bike lane to the middle and separating it with a curb, or construction cones/tubes? What about REMOVING THE FREEWAY ONRAMP!?!?! Seriously, that’s why there’s so much trouble at that intersection; and the complementary S.Bound onramp at Winning Way/Wheeler is similarly dangerous for car traffic. I’m getting VERY frustrated with the city comprosing the safety of cyclists because they can’t find a solution that accomodates current traffic levels.

thanks, Jonathan, I have listened to the clip and agree with comment 11 that the response says nothing at all. a plausible concern might be that if you limit right turns to the far right lane, you will have a lot of motorists changing lanes at the last moment, which could actually be worse than what we now have. but there is such a thing as signage (blocks in advance) and solid white striping (indicating that a lane change is forbidden, sorry, you missed your chance a few blocks back), and enforcement. eventually people do get the message. also I think comment 12 raises an interesting point: why do we even have a freeway onramp here?

I don’t like the idea of seperate signal lights. It will just make things more confusing.

If we have to have two right turn lanes then mark the left one that also goes straight with sharrows and take the lane through Williams. Cars will still have a full through lane and a right turn lane all to themselves.

Personnally, I think that the only real problem with this intersection is the false sense of security that the painted bike lane gives to inexperienced riders; like it’s some kind of force field that’s going to protect them. In reality, it really isn’t all that different from any other intersection where the vehicle to your left can decide to turn right. Unfortunately, it took me a couple of close calls to learn to always be aware of where vehicles are to my left, to watch for any sign that they might turn, and to never, ever allow myself to be in a position where I would be hit if they do.

This section is flat to slightly downhill. I ignore current bike lane and move into the traffic lane and ride with traffic. The solutions proposed appear to be very auto-centric, offering to create additional delays and perhaps hazards for cyclists. I recommend back to the drawing board! Is that old Sauvie Island bridge span still around? Maybe it can be incorporated into a solution to get bike-traffic up and over the auto-traffic. 🙂

Was it just me, or did Rob Burchfield not answer the question “why is removing one of the turn lanes from Broadway not on the table” in the slightest?