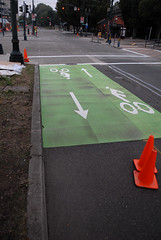 A parade is planned for Thursday (10/16) to celebrate the new bike access and safety improvements through the Rose Quarter Transit Center.

The project was the result of collaborative effort between TriMet, the City of Portland, the Bicycle Transportation Alliance, and the Lloyd District Transportation Management Association.

A statement about the event issued by TriMet referred to the previous configuration of the transit center as a “critical barrier for cyclists”, and that “the alternative bike route around the transit center was difficult to navigate.”

The parade will start with the breaking of a green ribbon at the southern end of the Transit Center (at N. Interstate) and then go north along Wheeler. Portland Commissioner and Mayor-elect Sam Adams and TriMet General Manager Fred Hansen are among the dignitaries expected to attend.

If you’d like to join the parade, meet at the Peace Garden above the Eastbank Espanade (near the bike signal at NE Lloyd and NE Oregon) at 1:45 pm.

very glad to see this come together though! I think I’ll take that route to work this morning now…

Being a Miss Manners, I’ve always gone the ‘official’ circuitious route using Multnomah. With the Blazers season about to begin with its corresponding traffic in the RQ, I’ll be glad to have a route that doesn’t require a left turn (Multnomah onto NE Wheeler).

Bravo to all parties for making this happen.

We need to remember that while we will have a clear bike route thru the Rose Quarter, we still need to slow down, watch for buses and trains coming in and out, and yield to the many, many pedestrians getting from trains to buses. Slow down and share this very busy transportation center.

Be sure to wave to all the Tri-Met bus drivers who tried to keep you out … LOL.

Just to clarify… the time of the parade is 1:45 pm as posted in the story.

also… another clarification is that not only is the parade at 1:45… but if you try to commute that way this morning (as I did) you will be disappointed that it is not actually open. They have it all blocked off with cones, barriers and such. Should be a nice commute home though. đź™‚

Hmmm, I rode through there on Tuesday because I saw the ‘Except Bicycles’ sign was already up.

That sign’s been up a while to permit bicycles to use the northbound bike lane.

Forgive me for double-posting, but I want to make sure folks see this:

Please join me next Monday 10/20 at the Hawthorne Lucky Lab at 5:30 pm for a thank-you note writing party. I’ll bring the giant novelty cards and the felt-tip pens; you should bring your stories about how much this fix means to you. I’ll see that your notes get delivered to TriMet, PDOT, and Sam Adams.

It seems to me that the most fervent and passionate members of the bike community aren’t encumbered by desks and cubicles during the daylight hours. They’ll just have to stop live blogging and working on screenplays at Stumptown for an hour or so to attend. (Note to coffee connoisseurs – no lines at Stumptown from 1:30 to 2:45 this afternoon.)

I have a day job but would love to nip down for this. Any idea when the ribbon cutting part of the event will take place?

“It seems to me that the most fervent and passionate members of the bike community aren’t encumbered by desks and cubicles during the daylight hours.”

The people at PDOT who actually made this happen are either A) sitting behind a desk or B) shoveling asphalt and performing other assorted manual labor all day. Nothing against bloggers and people who hang out in coffee shops, but come on.

And: Part of the problem with having a parade at 5:30 through the middle of the Rose Quarter at rush hour, is, well, rush hour. A couple hundred buses and a couple hundred bicycles per hour in there at the same time is complicated enough, (complicated enough that they had to put down a bunch of plastic to make it work, which is what the parade is about,) but add in some dignitaries and a mess of people just coming to look, and…

I was just helping my Mom navigate south through there this morning, in the least illegal way I could recommend…

I ride through the RQ every workday, taking the same ‘Miss Manners’ legal route back north as Lenny and I am so excited to have the new route home tonight!

Hopefully the fact that we’ll all have a clear, legal route both directions and not be taking a variety of squirrely ones, will also help with safety and encourage future commuters. Thank you to PDOT, TriMet, BTA and everyone else involved in making this happen. You’re awesome!!!