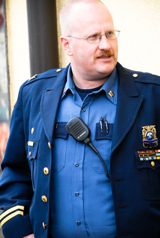 In fact, he also wants his officers, local judges, bike advocates, lawyers, and others to learn more too.

Next month, he’ll assemble all of them to discuss their perspectives and expectations about how bike laws are enforced.

I heard Captain O’Dea mention this at a meeting of the Portland Bicycle Advisory Committee (PBAC) on Tuesday night and he told me more in a conversation we had afterwards.

O’Dea says since taking his position in January, he has heard that many people have different ideas, expectations, and interpretations of how bike laws should be enforced.

The meeting is his effort to “get everyone on the same page,” and he says the first meeting will focus specifically on laws around the right-hook situation (where a motor vehicle turns right as a bicycle operator is going straight) — an especially hot topic right now with the roll-out of Portland’s new bike boxes. 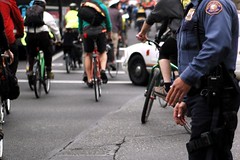 Perhaps enforcement of parade rides
could be a future topic.

One of the methods O’Dea plans to employ at the meeting is to pose a series of hypothetical situations. He’ll present a specific situation that leads to a bike/car collision and then he’ll ask everyone around the table how they would respond: Would they ticket the bicycle operator? The motor vehicle operator? Both? Neither?

It’s an interesting exercise, and one that was tried out by Officer Robert Pickett at the recent PBAC meeting as part of his own personal research. Pickett (now a PBAC member) asked us all to vote on the hypotheticals (the results sparked a bit of heated debate) and he’s using the data to gain a better understanding of how to enforce the laws.

O’Dea says this is just the first of what he hopes is a regular committee that can improve enforcement and interpretation of bike laws. In the future, O’Dea thinks the group might even end up proposing new bike-related legislation. “If we get to discussing a law, and we realize it just doesn’t work properly, maybe we’ll be able to approach the legislature with a possible fix.”

This is yet another step in a positive direction for the Traffic Division.

O’Dea and his Lieutenant Bryan Parman have so far made good on their promise to stay actively involved with the community on bike issues. They have been a welcome improvement over previous Traffic Division leadership, whose communication and enforcement styles put a strain on community relationships and reached a boiling point after two tragic fatalities last October.

What a refreshing change!

Sounds promising, though my skepticism knows no bounds.

This is an effort that we should all embrace and applaud. Thank you, Captain O\’Dea! This is the sort of care and leadership that the City of Portland PD needs. Know that many of us out here deeply appreciate it!

Sitting at a round table discussing hypothetical situations is a waste of time and will provide nothing more than false promises.

Why not run these different situations with real bikes and real cars/trucks at some place like PIR. The decision makers could sit in the grand stands and form their opinions based on real life looking situations. Better yet, put those people on the bikes run through the situations, and then put them in the car…so they can make a decision that comes from both perspectives…Not just from the people with the loudest voices.

I don\’t agree with you that \”sitting ata round table\” is a \”waste of time.\”.. but I like your ideas. I\’ll forward them onto Capt. O\’Dea, I\’m sure he\’d consider doing those things in the future.

Also, just FYI, I know they\’ve done stings specifically targeted toward cars violating bike lanes and I think they\’d be open to doing more of them.

Also, around the table at these meetings will be cops that have been on bicycle patrol units… so they def. have a perspective on what it\’s like to ride.

Well said, Jonathan. Sometimes people must understand that steps in a forward-moving direction require thoughtful planning, pragmatic strategies, and- most importantly- productive dialogue between stakeholder groups so that understanding and solutions can be established. It sounds like this is a standout case of just that. I send my thanks to all involved, and to Jonathan for sharing this good news.

this is LONG, LONG overdue by the Traffic Division. O\’Dea should be applauded if this leads to improved street safety and accountability from traffic enforcement officers on up.

now would someone, anyone PLEASE reform and increase legal penalties for drivers who negligently harm cyclists who are obeying all given traffic laws…

Sitting around a table can get a lot done, if approached the right way, and if the right people are actually even at the table!

I do like the idea though, of inviting Larry to go on a bicycle ride Portland at rush hour. Perhaps starting outside of City Hall, a loop around Broadway, & then and riding over the Hawthorne Bridge & over the two new green bike boxes?

If the Surgeon General can do it, so can our new Traffic Captain!

If they head out Hawthorne, ask them to have a look at the bus stop at 12th next to Burgerville. Thankfully, the bike lane markings were extended through the bus stop pad there recently (maybe when the bike boxes were put in?) to make it clear that cars shouldn\’t treat teh empty bus stop area as a lane to use to make a right onto Ladd Avenue.

But in the absence of that bike lane marking, what would officers to to a driver using that space as a right turn lane/approach to Ladd?

Glad to see traffic division taking this stance, and I look forward to seeing what they do with it in the future. Kudos to Captain O\’Dea, and I hope this brings positive results.

Y\’all don\’t realize how good you have it in Portland compared to other parts of the country. Before and after my wreck I suggested to my local PD that they should have cops on bikes to catch people that drive dangerously around bikes, and I was told that that would be too dangerous, and would get their cops killed. What I did everyday was too dangerous for armed police officers with backup to do… I considered asking if they thought I was disposable, but I was afraid of the answer.

We realize how good we have it, because we made it that way with lots of hard work. Texas is a big piece of sh*t, and the reaction of your local cops is just one example. We\’re not going to settle for that BS here. We got the Nazi out and now we\’re looking for people in our government to do their jobs and promote the safety of all road users.

Thanks for stepping up Cap\’n O\’Dea! We\’re looking forward to working *with* the PPB to improve public safety. That\’s all any sane person wants, anyway.

I wonder if Larry is reading this and would care to comment if there is any situation where too many or too much light is illegal on a bike. I have glowing wire, LED\’s and two hid lights (10 and 30 watt) on my bike.
He can check out the pix at http://www.clearplastic.com, my artistic journal.

On behalf of Commissioner Adams, I\’m looking forward to this conversation. I spoke with Captain O\’Dea and his boss, Lynnae Berg, recently about the importance of framing this conversation appropriately (as I see it).

(This will get a little wonky, so thanks for hanging in there.)

My message to Ms. Berg and Captain O\”Dea was that we all needed to be grounded in what we were trying to do. The \”what\” is manage the right of way in a manner that best ensures the safety and effectiveness of those who use it.

That prompts the question: how.

Bicycle use is just one of many legal uses of the ROW. But there is a widespread perception among bicyclists that to date law enforcement has not been sufficiently focused on our goal: managing the ROW for the safest, most effective use. Instead, law enforcement actions may have been driven by other motives. For example, ticketing fixie cyclists even if the cyclist is riding safely and not jeopardizing anybody else\’s ability to safely and effectively use the ROW. It seems punitive and breeds resentment.

The current PPB leadership understands that while there may be arguments in support of ticketing fixes without a hand brake otherwise obeying the law, in the long run it gives the bureau a black eye more than it serves the mission.

Ms. Berg and Captain O\’Dea agreed that the Police Bureau, PDOT, their respective commissioners in charge, the BAC, and other relevant entities need to be able to agree on what our responsibility is, and the protocol used to meet that responsibility.

Should cyclists be ticketed for failing to put a foot down at a stop sign when motor vehicles can (and do) kill cyclists with right hooks that yield no legal consequence? I think we agree that doesn\’t pass the straight-face test.

But the laws, frankly, aren\’t that instructive. We\’re going to take a hard look at the laws, ambiguous as they may be, and try to arrive at a mutually agreed upon interpretation. And, as Captain O\’Dea has noted, we may decide collectively we need to tell the legislature we need clarity and we\’ve got ideas on how to achieve that.

Ultimately, the law and its enforcement should serve and protect. If it\’s not doing that to the best of the ability of those charged with the responsibility we need to do better. It\’s a work in perpetual progress, so let\’s get started. But if we\’re serious about getting more people on bikes more frequently – and the city\’s transportation commissioner and hopefully next mayor is certainly serious about that – we need to do this. I\’m pleased to report that I genuinely believe PPB leadership is right there with us.

It\’s a lot more work to monitor motorists right hooking or otherwise endangering cyclists than it is to stake out the stop signs in Ladd\’s, but the risks in each case are entirely different. Let\’s hope that public safety is the bottom line in this discussion. I think Tom is headed in the right direction; it will be interesting to see whether the PPB traffic division is capable of making the transition to truly protecting vulnerable road users and lowering risk vs. rote enforcement of the letter of the law against cyclists, regardless of risk.

I agree with what folks have said here about prioritizing public safety: police resources need to be allocated according to a hazard based assessment. If a certain type of traffic offense is responsible for x % of serious roadway injuries or fatalities, it should not, for example, receive 100x % of enforcement resources.

Ultimately, both enforcement resource allocation as well as legal deterrents should be adjusted based on rational hazard assessments. For example, it makes no sense to say that someone drinking a couple drinks and injuring someone on a repeat offense gets jail time, but someone else driving carelessly on a suspended license and killing someone gets to walk away with a $1000 or even $10000 fine.

Is is possible to post those hypothetical scenarios? I think they\’d be interesting to see.