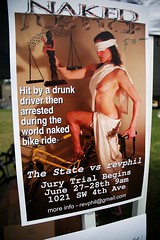 Phil made posters (like this one)
to encourage support at his trials.
Poster photo by Dat Nguyen
(File photo)

Just over a year ago, while holding up traffic on W. Burnside for hundreds of cyclists during the 2006 World Naked Bike Ride, bike scene personality and filmmaker Reverend Phil got into an altercation with a motor vehicle (read this story for a photo and full rundown of what happened).

The incident ended up with Rev Phil facing four misdemeanors and up to 2 1/2 years in jail. Phil has always maintained his innocence and his legal team (a lawyer, witnesses, and investigators) has uncovered some not-so flattering facts about the motorist and her passenger (an off-duty Portland Police officer who accosted Phil during the incident).

According to Phil, in the past year the courts have delayed the trial “a half dozen times or more” for a variety of reasons. Then last Friday, with the trial set to start tomorrow, and a building case that might have exposed the naked truth about what happened, the District Attorney decided to give up and dismiss all charges.

Phil says the news is “wonderful and frustrating all at once.” He adds that he has spent considerable time and effort over the past year to defend himself but isn’t sure if he’ll counter-sue.

When he heard the DA’s decision to dismiss the case, Phil was inspired to write a poem:

“First there was nothing and it was totally boring. Then there was nudity and that was totally riotous. Then clohes, which were practical, but not as much fun. Then bikes, which provided much pleasure across the lands (and sometimes waters).

Then one magical day, the perfect unification of bicycle sans clothing was achieved, and it was good.

It was awkward at first, but soon the skies opened up for all the universe did desire to gaze upon its beauty.

All was glorious for some time, then lighting (in the form of a Jeep Liberty SUV) struck down a naked biker, and it was not good. For a year revphil and all his friends struggled in legal purgatory. They were determined to get naked justice, knowing that day would come…and the skies would clear again, and the roads would be smooth, and the hills easy to climb, and the wind would be very refreshing.”

Dan Kaufman of Crank My Chain Bicycle TV has been following this case closely and has a report and an interview with Phil recorded last week.

I\’m happy Phil\’s not going to jail, but I\’m sorry that the details of the vehicular assault aren\’t going to see the light of day. Regardless of whatever Phil may or may not have been doing that night, it\’s clear from the eyewitness accounts that the driver of the Liberty was impatient and possibly criminally reckless.

Jonathan, your story mentions \”…uncovered some not-so flattering facts about the motorist and her passenger\”. Stop teasing! Where can your readers go to get more info on this?

wish I could, but somehow I\’ve lost over a year of emails (anyone know how to fix this on a PC using OE6?) and included in that was a lot of info from phil about this case. maybe he\’ll read this and comment with more details…

Sorry Jon, I don\’t think the title of your article is accurate.

Justice would be for the real purps to find themselves in hot water.

well it would seem that the DA and pepper underestimated the bike community, glad that they came to they\’re senses about this bogus case. hopefully someday we can see equal treatment of cyclist and motorist.

p.s. naked bike ride in celebration is maybe in order??

This pleases me. Also, the ride was truly glorious.

and seeing the first stories that come up 😉

PS: if you click on the stories the will stay at the top of Google…

The true story of Reverend Phil\’s bogus arrest (and even more bogus charges )has yet to be told. I was a witness to the altercation, and I had also signed up to serve as a witness for the defense at Phil\’s trial.

Based on what I saw with my own eyes, and by statements made later by the driver, here at a few of the relevant facts:

1. The driver of the SUV got tired of waiting for all the naked cyclists, so she drove forward and –by her own admission– \”nudged\” (read: hit from behind while his naked back was turned to her) in a failed attempt to convince Phil to get out of her way so she could continue driving without furthur delay.

2. Rev. Phil instinctively turned around and slapped the hood of the SUV, while asking her to, \”STOP.\” He appeared to be in fear for his life, because the SUV driver could have easily run over him and his bicycle, perhaps seriously injuring him or even killing him on the spot.

3. The passenger in the SUV then placed a phone call to his co-worker/buddies; it turns out he is an off=duty cop. He and his \”girlfriend\” are out for a night of drinking (and driving). The exact words of his conversation with (off-duty) Officer Stensgard\’s conversation with his on=duty buddies wasn\’t recorded for posterity, the gist of the conversation was this: \”Get down here right away; I\’m about to get into an \’altercation\’ with a naked bicyclist who needs to be arrested and charged with a variety of misdemeanors.\”

Officer Stensgard then stepped out of his drunken \”girlfriend\”\’s SUV and proceeeded to attemtp to inititate a physical altercation with Rev. Phil. Phil, to his eternal credit, refused to get physical with the bullying, menacing passenger (Phil had no idea at the time that his assailant wat an off=duty cop).

Nevertheless, even though Phil managed to avoid a physical confrontation despite repeated goading and provocation by the drunken, off=duty cop, when the on=duty cops arrived, they immediately handcuffed Rev. Phil and arrested him on a variety of misdemeanor and felony charges, all bogus.

Note to readers: This was about the time I left the scene. I didn\’t know Rev. Phil from Adam at this time, and I did NOT want to get arrested or get involved with the situation at the time.

Instead, like a coward, I left the scene and re-joined the Naked Bike Ride. A couple of days later, Reverend Phil posted a request to the SHIFT list for witnesses to the altercation and arrest. That\’s when a sense of guilt and justice compelled me to come forward and share what I had witnessed.

Did the on-duty cops make the SUV driver submit to a field sobriety test, even though she was visibly intoxicated? No, they did not. Instead, they allowed her and her drunken passenger (off-duty Officer Stensgard) drive away from the scene of her hit-and-run felony.

Has justice been served by dropping all charges against Reverend Phil? Yes and no.

Yes, because Rev. Phil is absolutely NOT GUILTY of all charges, and I am speaking here as an eyewitness to the events in question.

No, because the drunken SUV driver has not been charged with drunk driving or with hit and run, and she is guilty of both, in my opinion as an eyewitness on the scene.

And no, because Officer Stensgard, on of Portland\’s finest, hasn\’t been subjected to any inquiry or internal investigation that I am aware of regarding his blatant disregard for his duty to defend the citizens of this city–including Reverend Phil–against dangerous criminals like his drunk-driving \”girlfriend,\” and Officer Stensgard has also not been investigated for misuse and abuse of police powers.

This is not surprising to me; but still, it makes me sad.

Nevertheless, I say we celebrate!

Reverend Phil is a free man, and all of these bogus charges against him have been dropped!

(I sincerely believe that had he gone to trial, he would have been found \”Not Guilty\” in a unanimous jury verdict, anyway. By dropping the charges and dodging a messy trial, the DA\’s office gets to avoid this incredibly embarrassing result to their inept case.)

Curt Dewees
Witness for the Defense

what I find appalling is that the cops gave Phil a citation for open container for his empty beer can, but didnt question the intoxication of the driver at all.

What, no photographer credit for the poster. I guess I am chop liver.

I might have to take him to court for that…

thanks everyone. It truly was a team effort.

Check out today\’s story in the Oregonian:

\”The whole point of the World Naked Bike Ride, the Rev. Phil Sano said Tuesday, is that bicyclists are vulnerable in traffic, and he was ready to go to court on that point this week. He had a videotape. He had witnesses. He had a poster of a bare-breasted woman with the scales of justice in one hand and a bike lock in the other.

\”Then the district attorney dropped the charges.\”

Dat Nguyen is an AWESOMELY TALENTED photographer. Dat worked for over two hours (literally) to get the best possible images of the \”Naked Justice\” model for Rev. Phil\’s poster. And he did his work as a volunteer.

Speaking of pro bono work, Stu Sugarman is also an AWESOMELY GOOD ATTORNEY & KIND HUMAN BEING for serving as Rev. Phil\’s pro bono lawyer and putting in so much time and effort into Rev. Phil\’s case.