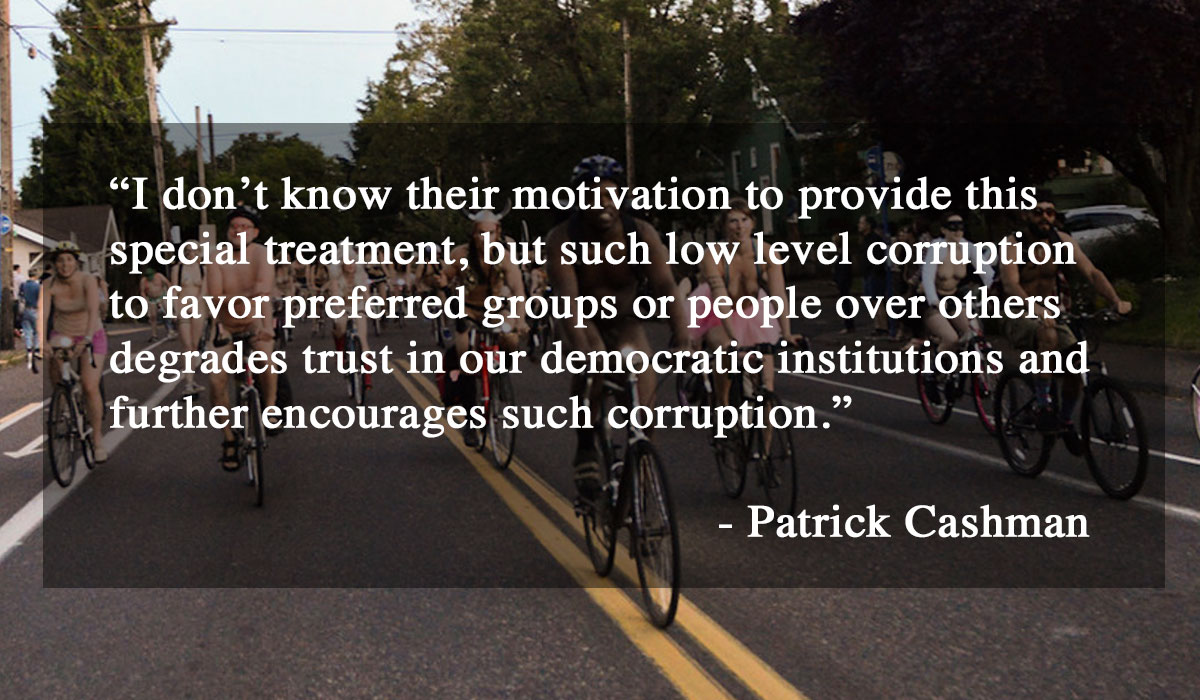 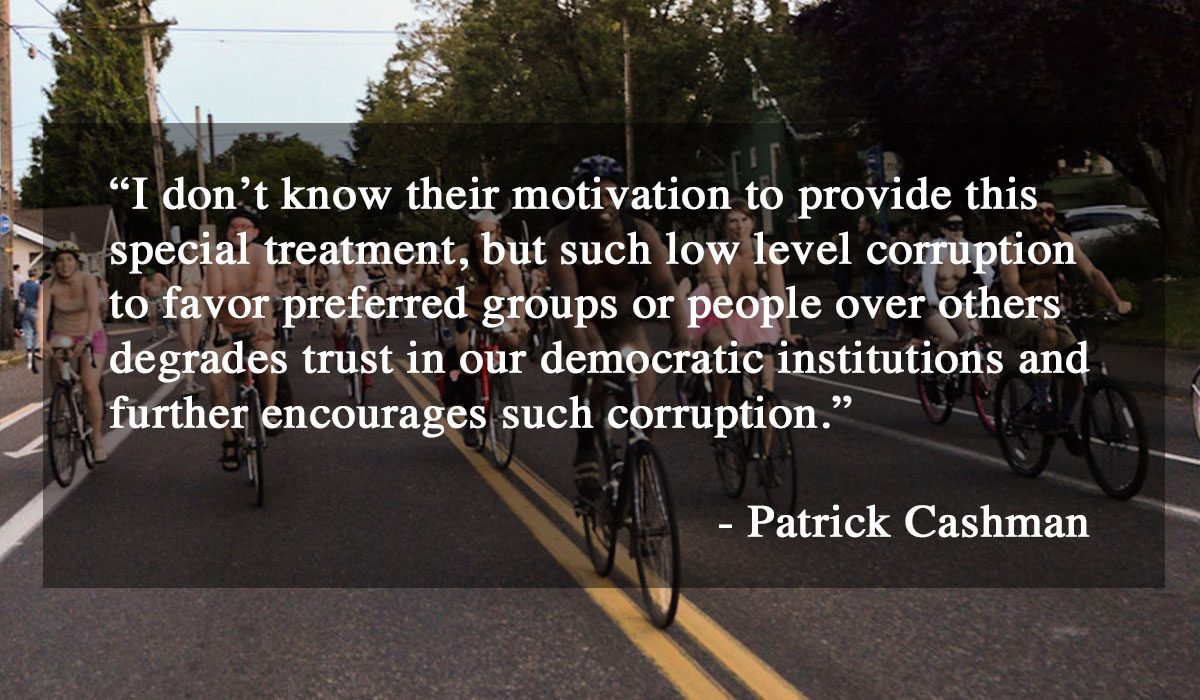 A man named Patrick Cashman has a bone to pick with Portland’s World Naked Bike Ride, the 9,000-rider strong annual event which will embark from Laurelhurst Park on June 29th.

Cashman has been on a personal crusade since late last year to hold ride organizers accountable to the letter of the law and to force the City of Portland to reveal the ride’s route. 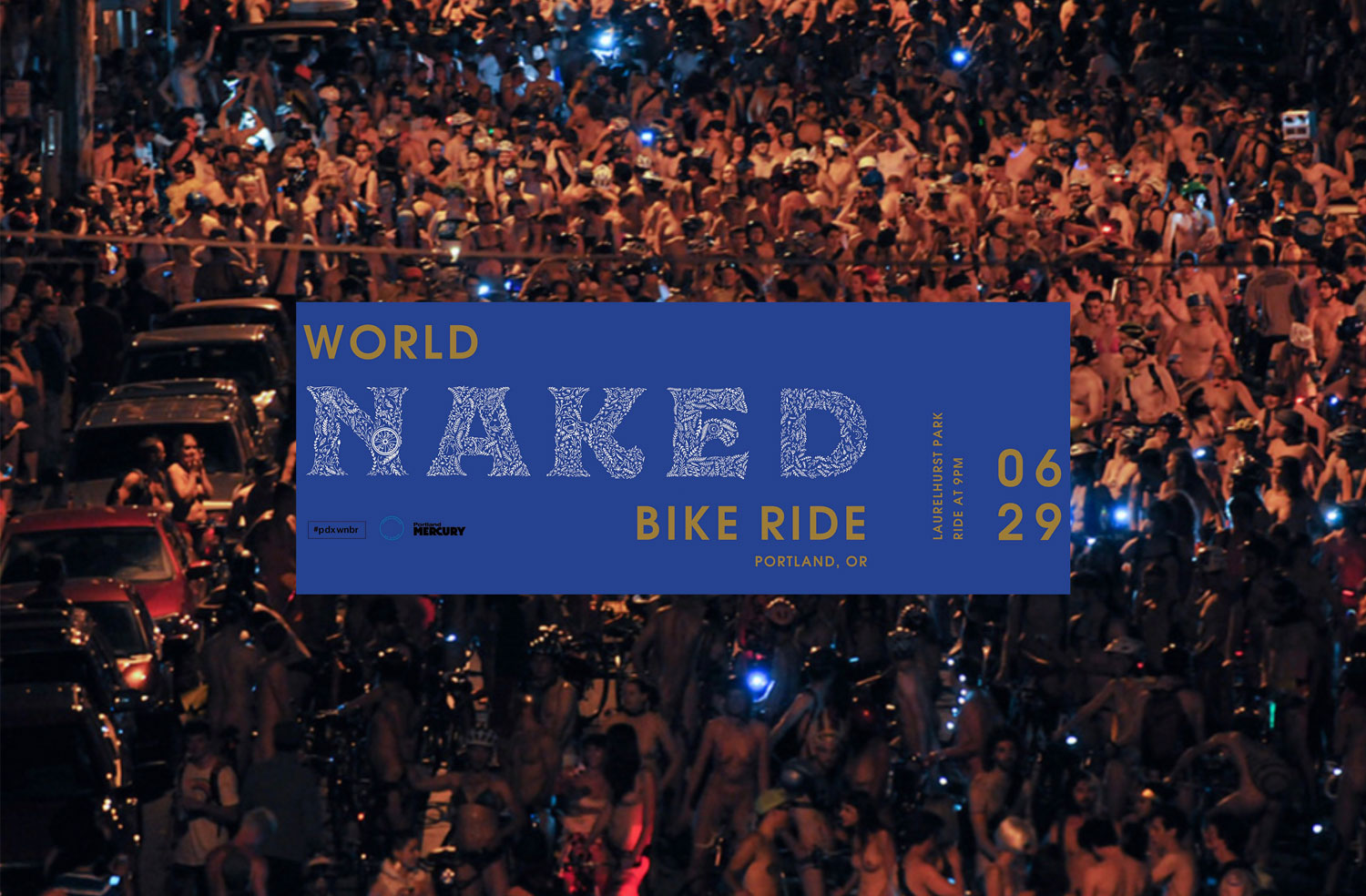 The local edition of the World Naked Bike Ride, Portland’s annual clothing-optional gathering that celebrates human-powered transport and the vulnerability of people who do it, will start from Laurelhurst Park. The 16th edition of the ride happens on June 29th at 8:00 pm. 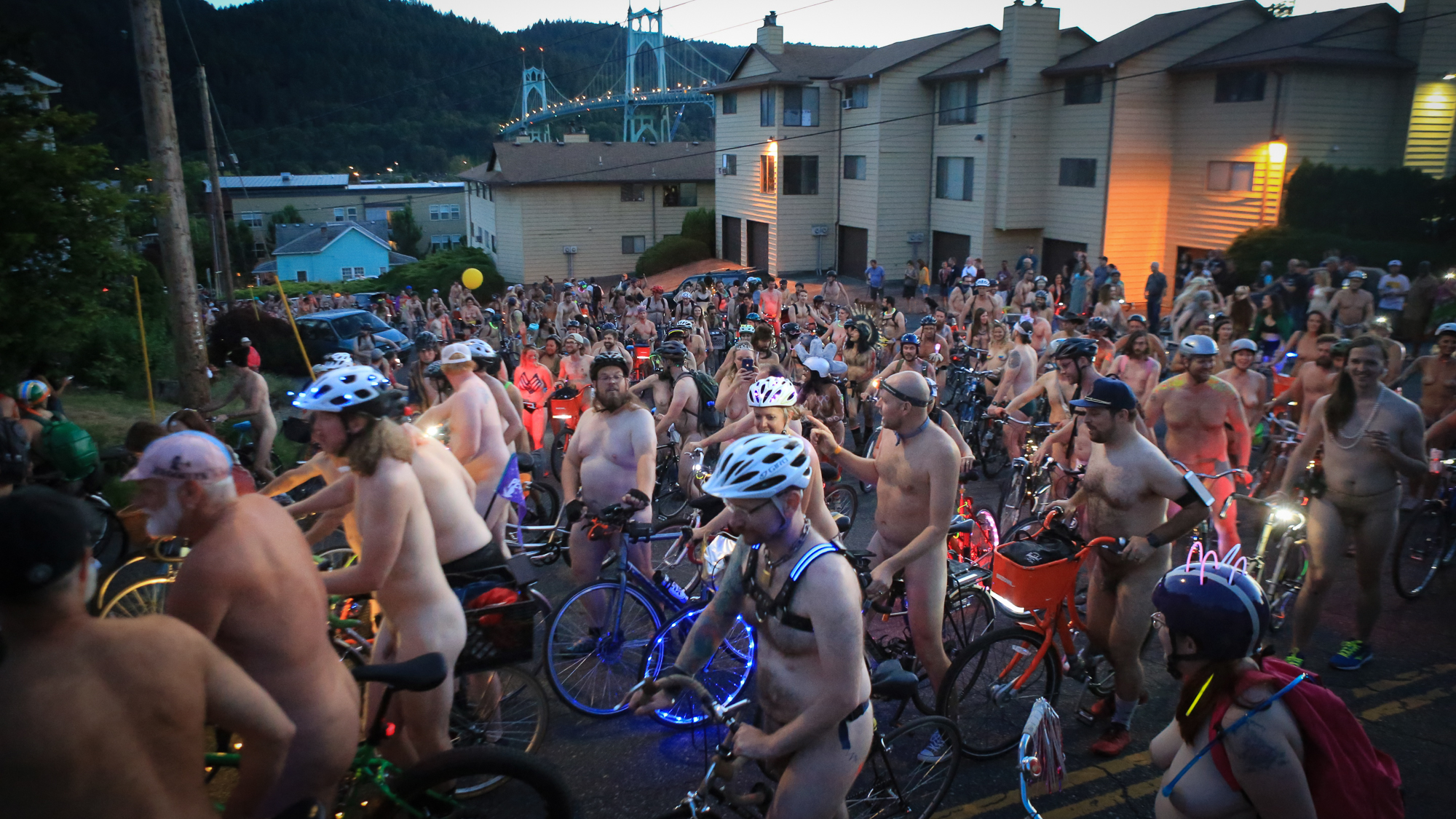 *Images of the 2018 World Naked Bike Ride by Sony Ericsson.

The ride turns 15 this year. And just in case you want to mark your calendar, organizers say June 29th is the date of the 2019 edition. 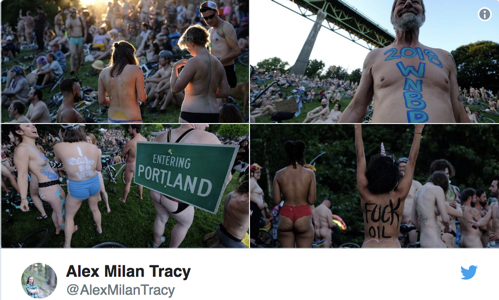 By all accounts last night’s World Naked Bike Ride was a huge success. The (rather short) route started in Cathedral Park under the St. Johns Bridge (which by the way is spotless this morning, nice job organizers and volunteers!) and stayed on the bluff along Willamette Blvd before working its way over to the end point at Woodlawn Park.

We’ve heard from several readers who said it was a great night of protest, partying and carfree fun. 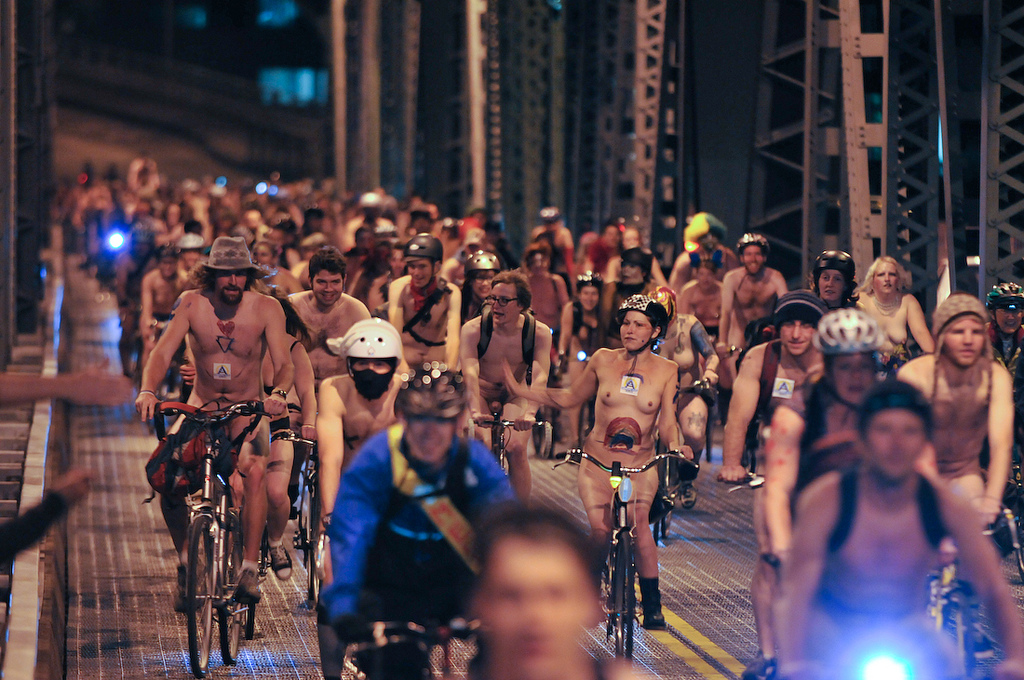 The largest free bike ride of the year is less than a week away.

Portland’s World Naked Bike Ride (WNBR) is many things: a celebration of humanity, a protest against driving and fossil fuel abuse, a rolling party, and a demonstration of the unifying power of bicycles. The event will attract upwards of 10,000 people — many of whom don’t bike any other day of the year. That’s an impressive number; but what’s even more impressive is that it’s all organized by volunteers. People in our community care so much about this event they dedicate weeks of their lives to make sure it’s a positive experience for everyone who shows up.

That means we owe it to them to help make the Naked Bike Ride a continued success.

I talked with one of the main organizers yesterday to get the lowdown on this year’s ride. Here’s what you need to know to have as much fun as possible — and to make sure we don’t risk spoiling this invaluable, largely DIY, tradition. 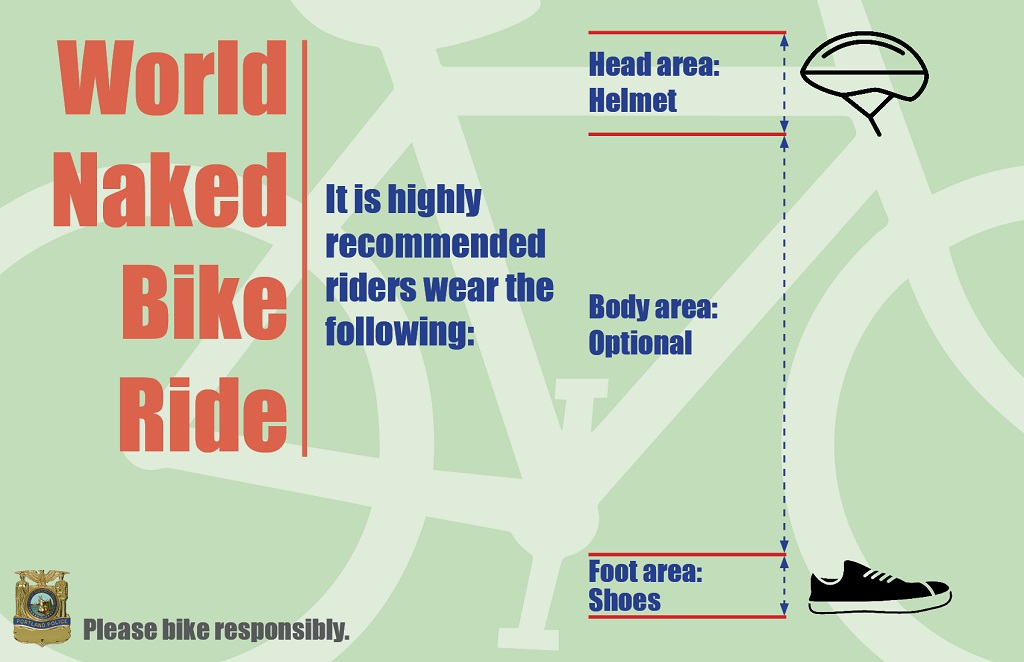 Our local version of the World Naked Bike Ride isn’t just an amazing cycling spectacle and one of the largest clothing-free rides on the planet, it’s also an illustration of what makes our city so great. That is, the level of coordination and respect between volunteer ride organizers and the Portland Police Bureau is something to be proud of.

For years now, ride organizers have worked very closely with Police staff on route selection and other details. Both are trying to strike a balance between free, unfettered fun and safe and civil behaviors that don’t cause too many issues for everyone involved. These negotiations and compromises are why we don’t see the route spend as much time downtown anymore and why there’s a big push to attend one of the many free after-parties instead of hanging out in a huge crowd at the finish line. Police and ride volunteers meet months in advance to trade concerns and hash out differences.

But there’s one compromise more important than any other: The fact that the police are willing to look the other way when they see fully nude adult bodies rolling gleefully down our public streets. Yes, technically it’s illegal to for adults to be naked in public if there’s someone of the opposite sex within view. Of course this law isn’t ironclad and there are court precedents around free speech and protest; but the police could make the Naked Bike Ride a lot less naked if they really wanted to (sort of like how they could have let Critical Mass continue if they would have permitted the illegal — but safe and entirely reasonable — practice of allowing large groups to roll through stop signs; but I digress). 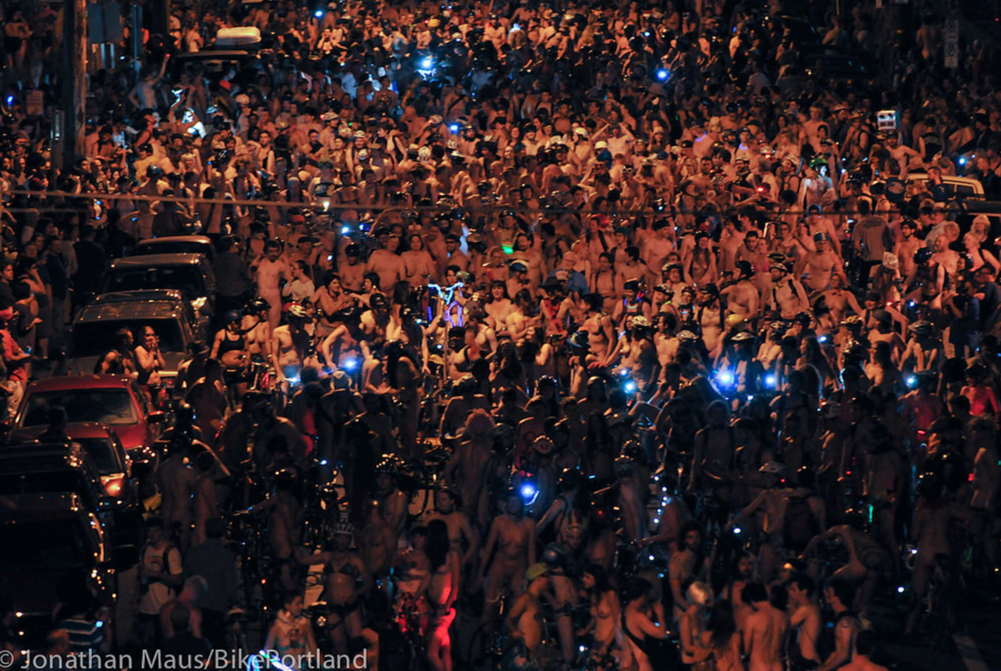 In about five weeks 10,000 people will fill Portland streets on bikes wearing nothing (or next to nothing) at all. The 14th annual Portland World Naked Bike Ride (WNBR) will happen June 24th. And while most of you haven’t even thought about it much yet, the organizers have been working for months to make sure the ride goes smoothly. 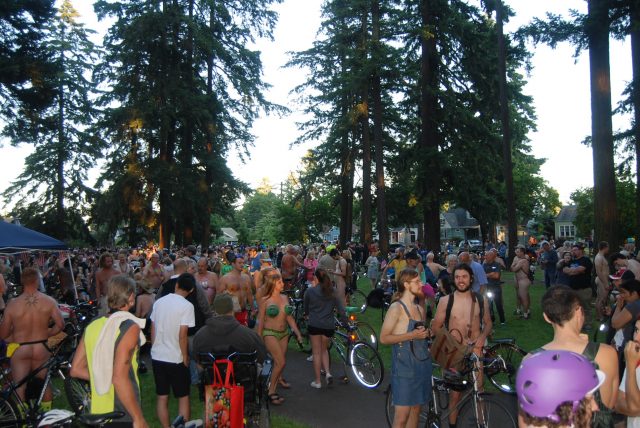 Many of these photos may not be safe for work.

Also, for those who’ve wondered what it might feel like to be part of the ride, we’ve also shared a video shot Saturday by longtime participant Tom Hardy. Check it out below. 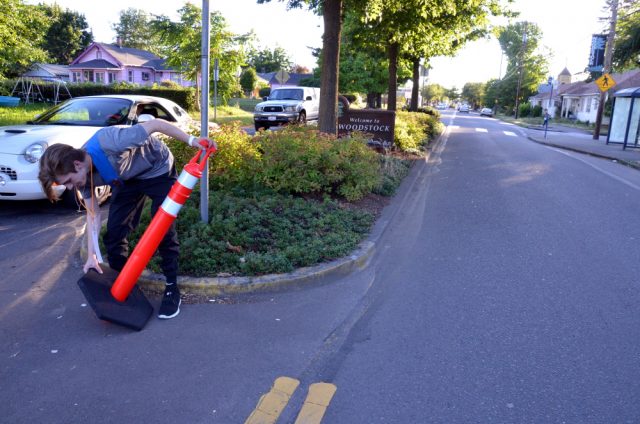 Who’s asking? A traffic cone at 52nd and Woodstock gives a subtle tip of the show to come.
(Photos: M.Andersen/BikePortland)

Some of the images in this post are not safe for work. Obviously.

There it stood in the middle of SE Woodstock Boulevard, a 42-inch-tall orange breadcrumb surrounded by a bustling commercial district.

The Beaverton 17-year-old who’d leapt out the rolling door of a blue minivan to drop it confidently into place in front of the east curb of a traffic median didn’t tell anyone what he was doing or why. No one asked. Maybe no one even looked twice as he hopped back in the minivan to ride to the next stop, well out of eyeshot.

Seven hours earlier, the boy in question — his first name is Evan — wouldn’t have looked twice at something like that, either. That was before he found out that he was about to receive what was, just for that day, maybe the most closely guarded secret in Portland, Oregon: the route of that evening’s World Naked Bike Ride. 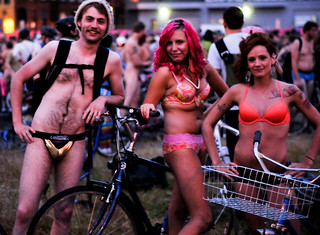 1) It’s not about sex. The WNBR is about loving your body, loving low-car or car-free life, demonstrating the power of bikes in mass motion, metaphorically conveying the vulnerability of people on bikes, experiencing the city in a new way and loving the friends and new friends you’ll see before, during and after. And although all of those things are almost certainly good for your sex life, you’ll be surprised how much fun nudity (or near-nudity) is without sex.

2) Nobody cares that your body is not perfect. Nobody’s body is perfect, so for one night, everybody’s body gets to be perfect. 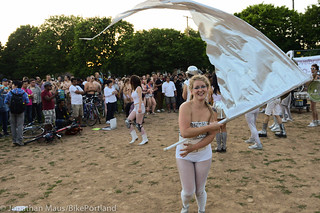 Celebrations before the 2014 ride. It usually rolls around sundown.
(Photo: J.Maus/BikePortland)

Oregon’s biggest pay-what-you-will group ride of the year is three days away. Maybe you’ve heard of it.

Portland’s World Naked Bike Ride will start rolling at 9 p.m. Saturday from Mt. Scott City Park, SE 74th Ave and Knight St., in what’s currently forecast to be a rain-free night after a warm day, with late-evening temperatures in the high 60s and a low of 54 degrees by early morning.

There are not many things that would keep me away from this ride. It’s not only one of the most fun and inspiring nights of the year for me personally, but the recap and photos I usually post are by far the most popular of the entire year (by a mile).

(Don’t feel sorry for me not being there, I was at another event where love, celebration and optimism filled the warm night sky — the wedding of your favorite bike journalist Michael Andersen to his wonderful partner Maureen Young!)