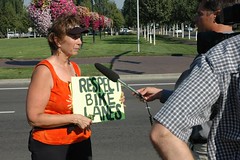 [The media helped us spread the word.]

Concerned citizens from Portland and Beaverton came together last Friday for a traffic safety awareness action. The event took place just a few yards from the intersection where Mike Wilberding was killed on August 1st.

Mike’s death sparked heated emotions from many people in the community who were outraged that the driver was initially only charged with a $242, “failure to yield” citation. 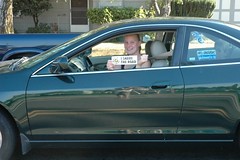 About 25 people showed up at SW 5th and Hall streets to stand with signs, wave at motorists, and do their part in making Beaverton a safer place to ride a bike. The event was very positive and motorists were supportive of our message; we got many honks, waves and smiles.

Ironically, several people waved to us with one hand while talking on their cell phones with the other. This prompted someone to make a sign that read, “Hang up and Drive!”

I passed out “I Share the Road” stickers to drivers as they waited at the red lights. The lady in the photo above was especially supportive because her husband rides to work and she worries about his safety. 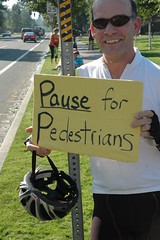 Bill Alsup is a Nike employee who told me Mike’s death “really hit home” because he rides these roads all the time. When I asked him what brought him out to the event he said,

“This sort of thing isn’t usually my personality, but when you here about this recent crash and someone getting water thrown at them and then being run off the road…it just gets your attention.”

The event also got the attention of the media; both KATU-TV and The Oregonian gave it solid coverage.

It’s very inspiring to know that in the course of just one month, community activist Brian Scrivner was able to start a new Traffic Safety email list (which now has 108 subscribers) and use it to organize this event.

It felt good to be on the streets in Beaverton. It seems the energy for change is high and the time is right to start working with local advocates and cyclists to have a greater impact in the future.

According to Friday’s Oregonian:

Four weeks ago, an Intel engineer riding home from his job was fatally injured at the corner by a car turning left. The driver told police he did not see Michael J. Wilberding, 58, of Tigard because he was blinded by the sun.

“That’s no excuse,” says Barbara Chapnick, 60, of Beaverton, who routinely rides more than 16 miles round-trip to and from her Lake Oswego workplace. The longtime member of the county bike group doesn’t want anyone to be the next Wilberding or Darrel and Sheryl McDaniel. The McDaniels of Hillsboro died when a car drifted over the fog line on Oregon 47 south of Forest Grove and hit their bicycles on Memorial Day.

No charges have been filed in either incident.

What I found odd, was that the police were overwhelmingly speedy in dealing with the cyclist situation. However the guy in a minivan who turned right while on his phone and nearly struck a cyclist (cursing us out as well) was completely off the radar of these proud men in blue.

A big shout-out to Brian Scrivner and all the other participants for putting on such an important and successful event.

I was a bit shocked to see the photo on Jonathan’s web site, as I recognized that location from biking it daily when I lived at my folk’s house three years while I looked for work in P-town.

This is definitely *not* a road environment where as a cyclist I would be on alert. The traffic is fairly mellow, and the east/west street (and maybe the north/south as well?) has a bike lane. Just another reminder to be alert if when the situation might not seem to warrant extra vigilance.

No charges filed in the Wilberding or McDaniels cases. This is truly a very sad day for Portland area cycling.

Our lives are only worth $242 and a stern warning in the eyes of the state.