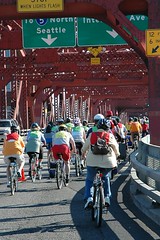 PDOT is close to releasing their 2006 bridge counts and so far the results are very exciting. In 2005, the average daily bicycle traffic over the four main downtown bridges was up over 10,000 for the first time ever and showed a three-fold increase from 1995.

This year, preliminary reports show a 20% increase over last year (the bridges included in the count are the Steel, Broadway, Hawthorne and Burnside).

PDOT has yet to release final numbers on the Burnside, but according to city bicycle coordinator Roger Geller, all the numbers are way up,


“What we’ve seen on the other 3 bridges—as well as at other locations throughout the city—is pretty impressive. On the Steel, Broadway, and Hawthorne, we’ve seen an increase from last year of 12%, 37%, and 15%, respectively. On these 3 bridges overall we’ve seen a 20% increase in bicycle trips compared to last year.”

Geller is currently at a professional conference in Madison Wisconsin, but I expect final numbers from PDOT sometime this week.

i wonder if these numbers take into account all the construction going on. for example, i have been avoiding the burnside bridge as a rule. but i guess, technically, i gotta get across the river somehow — so the numbers may balance out. ?

someday stats on morrison and freemont may be applicable

How many riders / peds would it take to get a dedicated bike and pedestrian span across the Willamette? I have seen such bridges in England and I think it would be a great addition to our riverscape. A connector from the Eastbank Esplanade to Waterfront Park between the Morrison and Hawthorne would be a commuter’s dream.

revphil said: “if we build it they will ride”. Bingo. Now the City just needs to put that mantra into practice in SW Portland.

Seconding Brad – bike improvements to the Morrison bridge would be nice, too. There’s a connecting ramp to the Esplanade from the south sidewalk of the Morrison bridge, but no equivalent on the north side. That’s fine for pedestrians, but how about a little bike love for that bridge?

i like brad’s idea, and i am thinking some dedicated bike lanes might be nice. and by “bike lane,” i mean a car-width lane. it would be interesting to see how many people feel it is finally safe enough to ride if they had more than 2.5-3 feet of road to themselves. i dream of having an 8-foot-wide, bikes-only lane on broadway.

revphil: I work for the county bridge department, and (though I’m just a peon) I was happy to learn recently that a dedicated bike lane is in the works for the Morrison Bridge.

As the second to last rung on the ladder, I know of no specific dates or exact plans, but I was delighted to hear that progress is being made nonetheless. Since I really love my job and love working for the bridge department, I’m hardly the most unbiased source of information, but I still feel good whenever I hear news like this.

That would seriously rock, and finally all the non-freeway bridges in the downtown area would be bike-enabled.

Now if we can only fix the problems on the St. John’s and Sellwood bridges. (although Sellwood might be in the works)