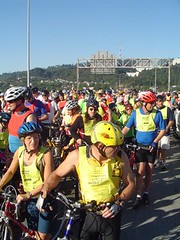 Looking to avoid a repeat of last year’s chaotic Bridge Pedal event, stakeholders and city agencies recently came together to discuss concerns and review the ’06 course.

Last year’s ride was unfortunately the victim of it’s own success (and maybe some poor planning). Several rest stops and other places on the route caused major bottlenecks and some grumbling from participants as well as city officials.

The craziness was due in part because there are three different routes (10, 8, and 6 bridge) and a walking event (Bridge Stride) all on the same day. 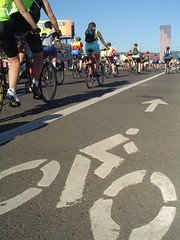 Changes this year focus on route selection, scheduling of riders, and the types of activities at key locations (especially on the bridges). Major thanks to Greg Raisman from PDOT for the following info.

Route Change
Due to a major bottleneck at the entrance to the Springwater Trail last year, organizers have decided to instead use McLoughlin Boulevard. 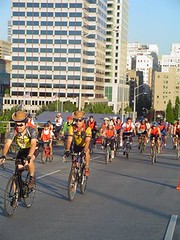 Scheduling
Riders who plan to cross 8 or 10 bridges will start between 6:30 and 7:30 AM. Then, unlike last year, there will be one-hour break before the 6-bridge riders begin. In addition to the staggered start, 10-bridge riders will begin their course by going north to the Morrison Bridge while 8-bridge riders will travel south to the Hawthorne Bridge. According to organizers, starting on different bridges will ensure that we won’t have as much course overlap as last year.

No matter what, it’s still a ride you won’t want to miss. To whet your appetite (the ride is on August 13), check out my photo gallery from last year’s Bridge Pedal.

I’m looking forward to taking over this city with 18,000 of my fellow cyclists!

Hmmm, no mention of changes for St John’s Bridge.

I suppose it is fitting on a day with 18,000 cyclists taking over bridges from the Marquam to the Fremont, we still get the shaft on St Johns. One narrow lane to share with cones, dismounting riders, and through riders. Yes, very fitting.

Of course no need to wait for Bridge Pedal to enjoy the St John’s Bridge. Tomorrow we’ll be taking the lane.