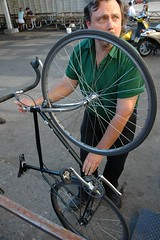 [Chris and an old friend.]

While at the Chris King Tour de France party last night, I heard someone mention that a guy rolled up on a bicycle made by Chris King himself. In all my years in the bike industry, including a stint as a King employee, I was surprised I’d never heard about this before.

For anyone not familiar with Chris, his hubs and headsets (made right here in Portland) are considered to be the best in the world and they have been ridden to three Tour de France victories by the US Postal Service and Discovery Channel teams.

Toward the end of the party, Chris showed up and I was there with my camera as he reminisced about the bike with it’s current owner, Jason Borum. 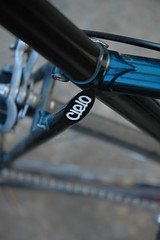 Turns out Chris made the frame and fork back in 1981 in his hometown of Santa Barbara, California. He made them mostly for local racing teams and they were sold for about $250 a piece.

Borum got the bike as a hand-me-down and used it as a messenger for several years. He jokingly said he was ashamed at how dirty and banged up it was, especially with it’s maker giving it such a close inspection.

On the seat-stays Chris engraved the word “cielo” which means view sky in Spanish. This is likely an inspiration from Santa Barbara, where there’s an epic and beautiful mountain road called Camino Cielo that is also a popular bike route (oh the memories).

Check out more photos of this classic Chris King bicycle.

Just a small correction/addition: I’ve only had the frame for around a year (and only used it for work for a few months), so I’d like to think it suffered most of it’s “bang ups” before I took possession. I also want to thank Nathan for hooking me up with it when I really needed a frame.

It would be extra sweet if it actually had a CK headset (& hubs). Then it would be a work of art…

Nice bike (and story) regardless.

Quality never goes out of style.

That’s some fine fork rake on that bike.