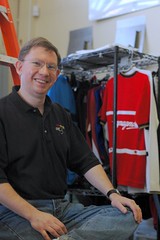 You wouldn’t know it from the outside, but up on MLK Blvd. (at Jessup Street), behind an IT company called Netropole, is an online retailer of bike apparel called Veloclothes.com.

I recently paid them a visit to find out more about the company.

Dave Johnson, a major bike enthusiast, is the owner and founder of Netropole. Two years ago, seeing a downturn in the tech sector, he decided to launch Veloclothes.com as a side business. He figured it was a safe bet because he loves bikes, this city loves bikes, and Netropole just so happens to develop and support e-commerce software. 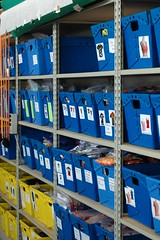 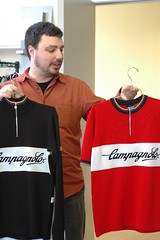 Once the site was built, he remodeled the back part of his existing offices and turned it into a warehouse to store bike apparel, a computer, and shipping supplies. At first it was just a part-time business, but sales have been so good that last summer he hired a full-time employee (Dave Roth) and hasn’t looked back since.

While the location is definitely not set up for retail business, Dave says that some locals do stop by to pick up their orders.

Veloclothes.com is known for their extensive line of imported beer jerseys from a little-known company in Belgium. They also carry Showers Pass Jackets (a local company based on Scholls Ferry Road), a line of collegiate team jerseys, an extensive line of pro team jerseys, and cycling shorts that can set you back anywhere from $30 all the way up to a $300 pair of Santini bibs(!).

They also do the occasional custom job and were proud to show off a jersey they just finished for the Bahama Tourism Council. Who knows, maybe there’s a custom BikePortland.org jersey in my future…

[Here are a few more photos of my visit.]

Also Portland Cycle Wear which I think Jonathan wrote about a while back.

I wear some of Veloclothes apparel when mountain biking on the east coast and in Moab. Their stuff is top quality, and my orders have been filled FAST. It is apparent that they are obviously cyclists, too.