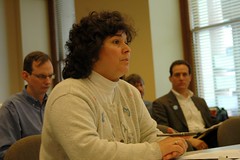 [Karla Keller makes her case,
under the watchful eyes of Evan Manvel
and Mark Ginsberg.]

Karla Keller, ODOT’s Maintenance Manager for Portland, brought along all sorts of stuff for the presentation of her proposal to ban bicycles on metro area highways. She passed out 18 pages of impressive, full-color aerial photos, maps, and internal memos. But unfortunately she forgot the most important thing of all…sensible justification for her proposal.

Due to a complete lack of evidence, logic, and public review, Keller’s presentation was met with serious skepticism by members of the Oregon Pedestrian and Bicycle Advisory Committee (OPBAC) and the public who packed a meeting room at City Hall last Friday. 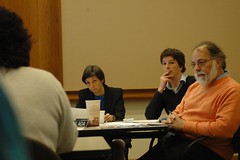 [They’re not buying it.] 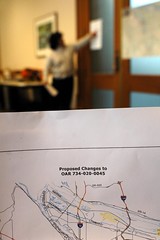 Lawyer Mark Ginsberg put it best when, during his testimony he said, “I think what we have here is a solution that’s looking for a problem.”

To Karla’s credit, she did reiterate that this was just a draft and that “it’s not an all or nothing proposal.” I would say it’s a nothing proposal and that if Keller wants to really push this thing, she’ll need to start by first finding a problem and then working with the community on the solution.

Beyond the proposal, this episode has hurt ODOT’s PR and credibility in the bike community. That’s too bad because I think we can both gain much more by working together. But when stuff like this happens it just widens the chasm of cooperation.

I mean come on, a pre-emptive ban on roads that are currently open to bikes with no evidence or public input? Sheesh. 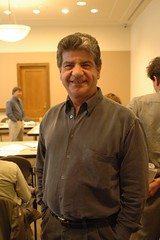 Would the public even have really known about this if it weren’t for posts on this site? How can an “advisory committee” truly represent the citizens if the citizens don’t know what’s going on? These are the issues that concern me. I just wish we had this kind of engangement and impact during the St. Johns Bridge debacle. OK, I digress.

The good news is that I finally got a chance to meet ODOT’s bike and ped coordinator, Michael Ronkin (see photo). He’s seems like a good guy and has participated on this site in the past. It was also a good chance for me to learn more about the OPBAC and the inner workings of the immense organism that is ODOT.

I think bicycles are slowly but surely finding a voice in ODOT’s transportation planning. But, as this episode demonstrates, we must stay vigilant and remind them that we’re here and we deserve their respect.

For more coverage, read Evan’s post on the BTA Blog (which he posted live from the meeting!) and Jim Mayer’s piece in the Oregonian yesterday.

The St John’s bridge debacle really set ODOT’s baseline concerning bikes. The clear inability of their own traffic engineers to encompass more than cars into their calculations was clearly evident and an indictment of their internal culture. I sure hope if ODOT is playing “partner” in the recent move to make Oregon a bicycle tourism destination that they give themselves a big high five for their work on the state’s most beautiful bridge.

This latest chapter just reinforces the impression. They really are in a position where the onus is on them to prove their bike-friendly credentials. I’d settle for “bike-aware”

Nice work from those of you who take these issues on. I will more than likely never meet any of you. However, I benifit from your hard work.

I ride on the sunset HW eastbound from the zoo to Jefferson exit frequetnly, with no problems (other than a few pot-holes). It is good to know that the dialoge on this site, is about buiding relationships with ODOT for the future, while also keeping-up a strong position.

Thanks again! I owe you all a beer!

Thanks, Jonathan, for bringing this to everyone’s attention. It seems to me like one of those things which someone tried to slip under the door while no one was looking, and I’m glad that OPBAC / ODOT saw through it.

After reading both the post on the site and the Oregonian piece, I still don’t understand the rational of ODOT for the ban.

On the surface it does not seem like a good idea having bikes on freeway shoulders without design provisions for them to safely be there. Think about the crossing of an off/on ramp. But if there are a lot of people using them for coridors, then maybe they need to design it in or bike lane alternatives.

How big is the problem? What is ODOT’s real motivation?