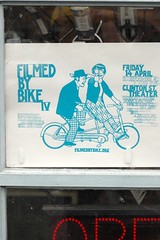 You’ve seen the classy flyers, you’ve read about it on your favorite blogs, your friends keep talking about it. It’s Filmed by Bike, a smattering of bike film shorts (some of them made right here in Portland) coming to you this Friday night at the Clinton Street Theater.

This is the little film fest that could; growing from 80 people its first year to an expected crowd of over 500 this year. For Festival Director Ayleen Crotty, it’s all about the filmmakers. She says that, “60% of them put their pieces together just for this festival, and there are always a handful of submissions from people who had never before made a movie.”

I got to see all the submissions at the jury screening last week and now Ayleen has selected the cream of the crop for your viewing pleasure. This year’s films have an international flare and include everything from a documentary about female bike messengers in New York City called, “Even the Girls,” to an inexplicable short titled “Bikkake” which features a mini-bike riding, masked, Japanese geisha who tramps the streets of Portland sucking on a lollipop (or what she calls, a “rorripop”). You’ll just have to see that one to understand.

It’s going to be a rockin’ party and it’s not just about the films. There’s a solid list of raffle prizes (including a super secret, limited-edition, BikePortland.org Gift Pack!), and the fest is a benefit fund-raiser for the Multnomah County Bike Fair. So don’t miss it! Here are the details:

OH YEAH! Thanks for posting this, Jonathan, and for being on the jury. Filmed by Bike is going to be off the hook. Seth from Clinton Street said they’ve never sold out two shows in a row since he’s been there, but Filmed by Bike has sold out every year. So we’re going for it! We plan to sell out every single seat in the house.

See you there,
Ayleen

See, those zoo bomb bikes are useful for something.

Out of 18 possible films to be discussed, I am pumped that you gave my film a little press. Thank you for explaining the inexplicable…Alison