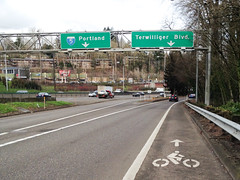 For the week of February 9 through the 13th, the BikePortland team (Michael Andersen and Jonathan Maus) will be stationed in Southwest Portland. We’ll be publishing special coverage of the people, projects, and places that define this quadrant.

Council Crest: If you live in Portland and like to ride bikes, chances are you’ve heard of this legendary destination. When I first heard about it, I recall how it garnered mythical status — as if its summit would rise above downtown Portland like a snow-capped Himalayan peak.
END_OF_DOCUMENT_TOKEN_TO_BE_REPLACED

END_OF_DOCUMENT_TOKEN_TO_BE_REPLACED

Finding my way around southwest Portland.
(Photos by J. Maus/BikePortland)

Yesterday was an epic day to kick off our SW Portland Week coverage. Riding in the area is challenging enough in nice weather, throw in strong winds and sheets of rain and things get very interesting. Despite the storm, it didn’t keep us from exploring the area’s bikeways.
END_OF_DOCUMENT_TOKEN_TO_BE_REPLACED

Who rides? Who drives? And what do residents think?
(Photo J Maus/BikePortland)

Though you can’t truly understand any community from numbers alone, you can’t fully understand it without them, either. As we get into our week in this quadrant, we wanted to ground ourselves in the hard facts behind the photos we’re taking and the people we’re meeting.

Fortunately, the City of Portland does a project every year that goes a long way to understanding the culture of each quadrant.

END_OF_DOCUMENT_TOKEN_TO_BE_REPLACED

SW rider mini-profile: Jim Anderson and the power of shortcuts

Anderson — a 37-year-old freelance graphic designer, cycling event organizer, and president of the Team Oregon cycling club — says he never rides on the area’s highway streets unless he’s very late, or very tired. That’s because out here in southwest Portland, the flattest and most direct routes also happen to be the worst to ride on.
END_OF_DOCUMENT_TOKEN_TO_BE_REPLACED

Will SW Corridor bring millions for biking, too? It might depend on the route

END_OF_DOCUMENT_TOKEN_TO_BE_REPLACED

As promised last month, all this week, Michael Andersen and I will be working and riding in Southwest Portland. The goal is to gain a better understanding of that part of our city (its people and places), and share what we learn and see with all of you.

The weather, topography, and distance from both of our houses (I live in north Portland, Michael lives in northeast) will make things a bit more challenging, but that’s all part of the experience.
END_OF_DOCUMENT_TOKEN_TO_BE_REPLACED

Get ready for Southwest Portland Week!

The second week of February (9-13) will be Southwest Portland Week here on BikePortland.

That entire week, News Editor Michael Andersen and I will be stationed in a secret bunker (probably a pub or coffee shop in Multnomah Village) where we’ll focus our editorial output on the issues, projects, businesses, and people of southwest Portland.

If you recall our East Portland Week last summer, you’ll have some idea of what to expect. The basic idea with these focused coverage events is to open our eyes to places that we don’t cover — or physically inhabit — as often as we’d like to. Sure, we have sources all over the region and we can cover places we never visit; but it’s just the not the same as being there. END_OF_DOCUMENT_TOKEN_TO_BE_REPLACED

**NOTE: This event will now be held online - Zoom reg link here *** In the last 2 weeks, two people have been killed walking across 82nd Avenue in two Read More »

On Wednesday the Portland Herald had an opinion column calling for the local governments to buy Alpenrose and make it a park. Little League, the village, opera house in addition to the velodrome and… Read Post »

If you look at the bicycling layer on Google Maps regularly, you’ve likely noticed that it’s often completely wrong. It used to be pretty good. I’m not sure what changed but I suspect some… Read Post »