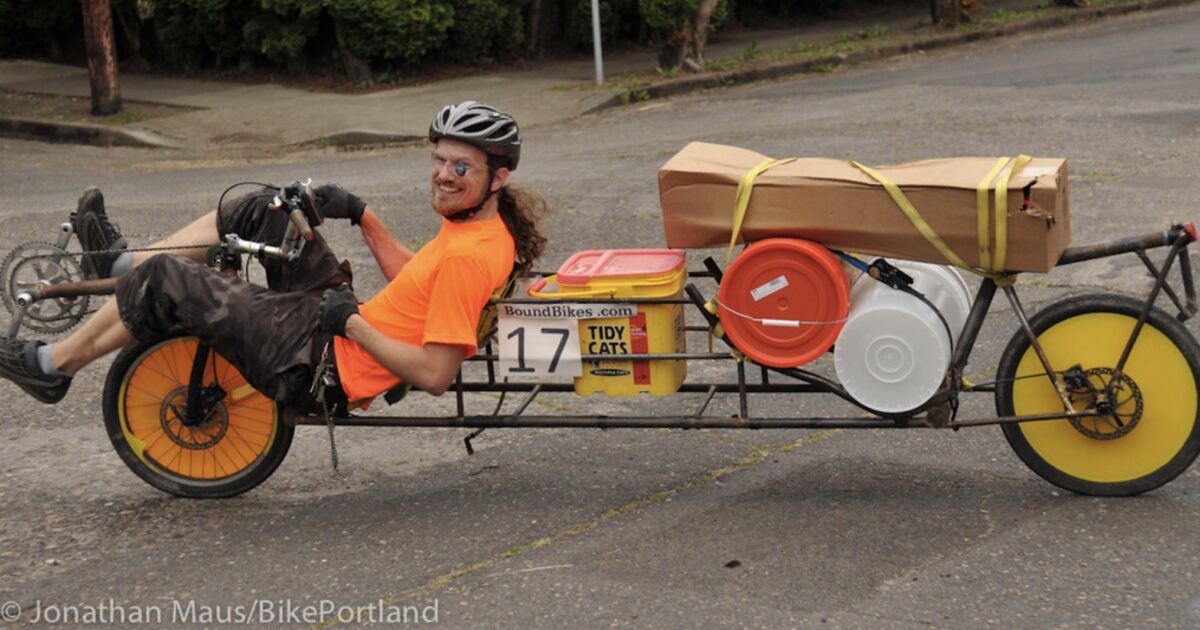 END_OF_DOCUMENT_TOKEN_TO_BE_REPLACED

Portlander gets global attention for bringing pedal-power to Standing Rock 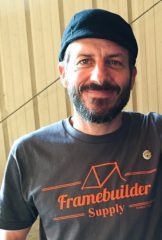 Cobb is name-dropped in a video published by CNN from Standing Rock that has over a million views.
(Photo: J. Maus/BikePortland)

A CNN correspondent noticed Cobb’s set-up and published a video report about it thaty already has well over one million views:
END_OF_DOCUMENT_TOKEN_TO_BE_REPLACED 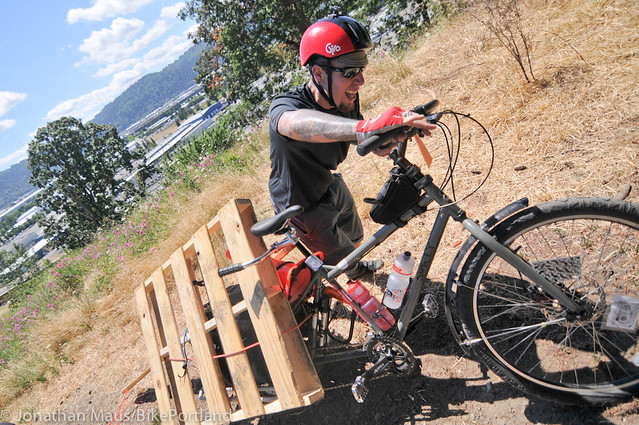 The annual event tests the limits of bicycles as an emergency response tool.
(Photos: J. Maus/BikePortland)

Bicycles — especially durable ones that can carry lots of stuff — will be one of the most important tools we have when a disaster strikes. They don’t need fuel, they can be carried over obstacles, they can haul lots of medical supplies and food, and they can even be used to generate electricity if necessary.
END_OF_DOCUMENT_TOKEN_TO_BE_REPLACED

‘Disaster Relief Trials’ demonstrate biking’s potential after The Big One 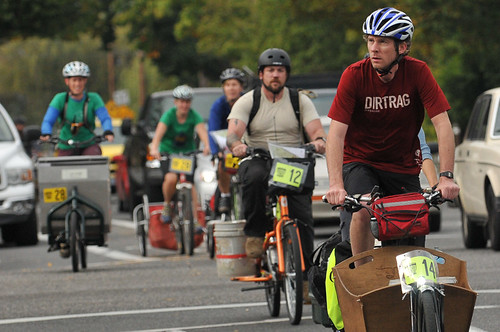 Competitor Adam Newman leads a group of riders on North Rosa Parks Way en route to the Oregon Food Bank checkpoint where they had to pick up a box of food before returning to the University of Portland.
(Photos © J. Maus/BikePortland)

With interest in earthquake preparedness at an all-time high, the timing could not have been better for the fourth annual Disaster Relief Trials. The event, which was based at University of Portland, aims to demonstrate that cargo bikes can be an effective way to administer aid and help rebuild our communities after a large quake or other natural disaster. END_OF_DOCUMENT_TOKEN_TO_BE_REPLACED

Talk of a disastrous earthquake got you down? Just keep on biking 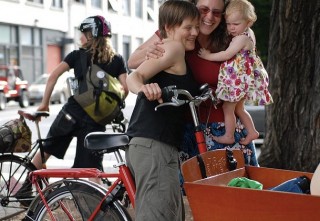 People who bike together, stick together.
(Photo © J. Maus/BikePortland)

Bikes won’t save you after the Big One, but the community built up around them just might.

There’s been a lot of unease in Portland since the publication of a fascinating yet gut-wrenching article in The New Yorker that laid out the impending Cascadia earthquake in excruciating detail.

After I read the piece, I was sort of numb for a while. Then my mind wondered (as if often does) and I started to ask the default question I ask myself around any seemingly intractable issue or policy, “How can bikes fix this?”
END_OF_DOCUMENT_TOKEN_TO_BE_REPLACED 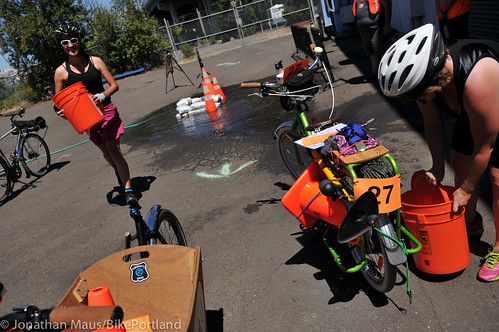 Portland’s Disaster Relief Trials are back for the fourth year and there are some exciting changes in store. END_OF_DOCUMENT_TOKEN_TO_BE_REPLACED 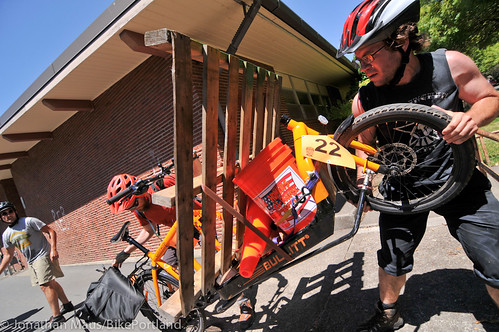 Competitors Ryan Hashagen (R) and Michael Jones work together to lift a loaded cargo bike over one of the many obstacles on the course.
(Photos by Jonathan Maus/BikePortland)

Those aren’t the words you expect to hear during a competitive cycling event. But when the event — the third annual Disaster Relief Trials — is based around a mock disaster and the competitors are piloting 150 pounds or more of bike and cargo on a challenging, 35-mile course, teamwork takes priority over individual gain.
END_OF_DOCUMENT_TOKEN_TO_BE_REPLACED 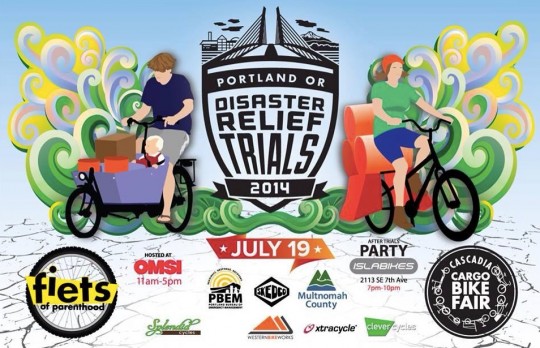 Two major trends in cargo biking will come together in Portland on Saturday at the Oregon Museum of Science and Industry. Organizers of the Disaster Relief Trials and the Fiets of Parenthood have joined forces this year in what is sure to the largest cargo bike gathering of the year.
END_OF_DOCUMENT_TOKEN_TO_BE_REPLACED 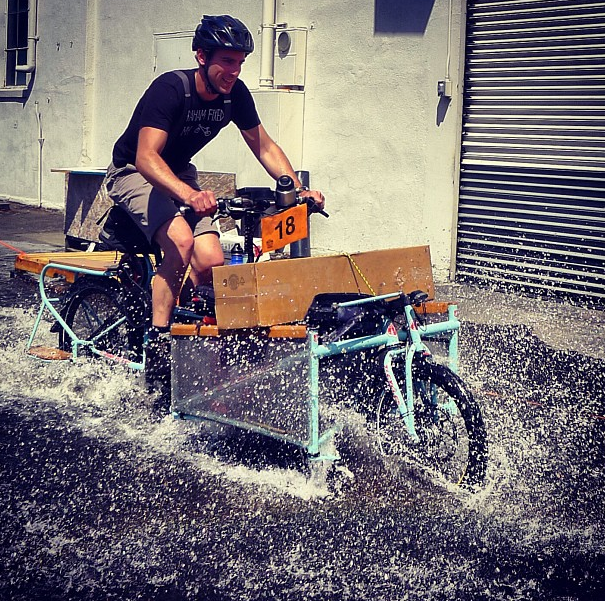 Portland’s 30-mile catastrophe-themed urban bike competition returned for a second year Saturday with a splash and a lot of grunts.

END_OF_DOCUMENT_TOKEN_TO_BE_REPLACED

What to expect at the Disaster Relief Trials 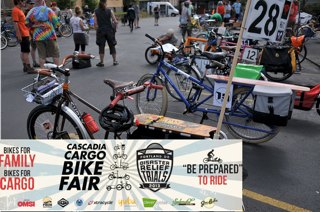 It’s here! The biggest event of its kind in the world.

One of the most interesting and influential bike events in Portland starts with a kickoff party tonight. The Disaster Relief Trials was first held last year at Velo Cult Bike Shop in Hollywood and since then the event has ridden a wave of interest, gotten attention from local, regional, and even national agencies, and has spawned imitators in Vancouver (BC), Seattle, Eugene, and other cities.

This year’s event features two big parties, the Trials themselves, and the “Cargo Bike Fair” — a huge gathering of cargo bikes and the people who love them. I’ll share more about what’s on tap, and highlight a few of the bikes and riders below…
END_OF_DOCUMENT_TOKEN_TO_BE_REPLACED