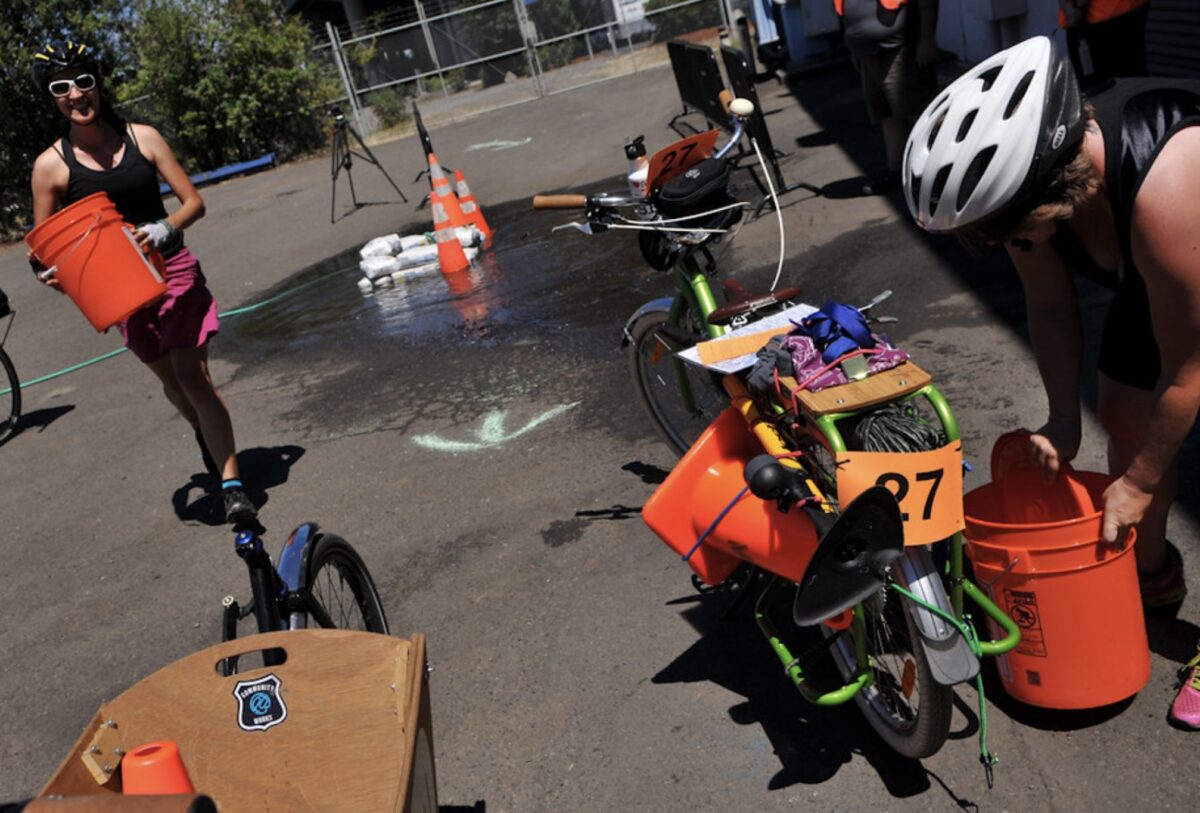 Participants load and carry buckets of water at a checkpoint during the 2014 DRT.
(Photo: Jonathan Maus/BikePortland)

“Realism is the order of the day.”
— DRT oranizers

When Portland’s cargo bike scene began to gel in 2011, one of the coolest byproducts was something called the Disaster Relief Trials.

It was around that same time in 2011 when a terrible earthquake and tsunami struck Japan and several news outlets reported how sales and use of bicycles boomed in the aftermath. We grabbed hold of the story and began pushing the narrative that bikes could play a key role in Portland’s disaster response. Thanks to some amazing Portlanders who had just the right mix of search-and-rescue, prepper, cargo biking, and do-gooderism vibes, DRT was born and held for the first time in June 2012. It wasn’t long until the trend was recognized by even the City of Portland Bureau of Emergency Management (PBEM).

After a few years of silence, I heard from organizers last week that DRT is coming back! A date of June 11, 2022 has been set and judging from the planning that’s already going on, I can tell this is going to be a very good event. The basic idea is that people compete in different categories (family, e-bike, cargo/non-cargo bike, etc…) and must navigate a course that tests their skills. The obstacles include things like carrying your bike and cargo over a barrier, going off-road, loading awkward objects, wayfinding, and so on. The event is set up like a disaster recovery drill intended to simulate what emergency experts refer to as a “day 4 supply run”.

“DRT PDX ‘22 strives to make the strongest case ever for cargo bikes as supreme tools of citizen-involved disaster recovery,” reads a statement from organizers. “Realism is the order of the day.”

Jonathan, as one of the first WorkCycles Bakfiets owners in the USA… I have to agree with your statement…” coolest byproducts was something called the Disaster Relief Trials”.

May get the opportunity to some disaster relief this winter as Renewable Energy fails to provide needed energy, exacerbated by failed Biden Administration Natural Gas policies in Europe and the USA (letting Russia build a pipeline and stopping one here). Stock up on down clothes, sleeping bags, etc. Your wished-for carbon free utopia is a-comin’:

We have plenty of domestic natural gas. You need to diversify your news sources (note: nothing in the article you posted mentions issues with supply in the US).

Heck, yes. As long as we have The Big One, and possible class struggle heading our way, may as well have fun with it.

Oh boy, now that I live in Portland — time to break out the Ahearne Cycletruck!

I really wish I could lift my sturdy, steel Rivendell over obstacles even when it’s unloaded, but I am not that strong. I take the pannier off it before I haul the bike up or even down the house steps. I’m sorry to admit that I’ll be of little to no help in a disaster.