Here on BikePortland we’ve highlighted the resiliency of bikes during natural disasters for nearly a decade now. While it’s old hat to those of us who remember the Disaster Relief Trials or the 15 minutes of fame for the concept following Superstorm Sandy in 2012, we haven’t seen much tangible progress from a policy standpoint.

For the past two years, planners from Metro and the Regional Disaster Preparedness Organization (RPDO) have worked to update the map of Regional Emergency Transportation Routes (RETRs) for the five-county Portland-Vancouver metropolitan region, which includes Clackamas, Columbia, Multnomah and Washington counties in Oregon and Clark County in Washington. The last update was in 2006. 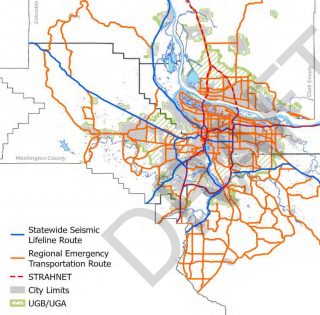 Similar to local emergency response routes (that many transportation advocates are all too familiar with for their project veto superpowers), regional ETRs are routes that will be prioritized in the event of a major regional emergency or natural disaster. The recent update focused specifically on response to the Cascadia Subduction Zone earthquake expected to hit our region any day now.

Routes identified through this process will be prioritized for, “rapid damage assessment and debris removal.”

According to a draft of the Regional Emergency Transportation Routes Update, “These routes would be used to move people, resources and materials, such as first responders (e.g., police, fire and emergency medical services), patients, debris, fuel and essential supplies. These routes are also expected to have a key role in post-disaster recovery efforts.”

Several sections of the report mentioned the need for clearing roads for the use of bicycles (emphasis mine):

“Often, ETRs are focused on the movement of emergency vehicles, cars, trucks, and buses. However, after an emergency in many metropolitan/urban, many people may not have access to public or private transportation. Alternative routes for pedestrians and bicycles should be considered in some areas to enhance mobility while also maintaining the right of way for emergency responders on the primary ETRs. For example, some pedestrians and bikes may use unimproved, spontaneous pathways, but in some instances we may want to include bridges for bike/pedestrian use, and connections of pathways to the ETRs; during recovery it may become prudent to designate certain streets/routes for bike/pedestrian and others for cars.

As an example of how municipalities can expand their own ETRs for non-motorized use as a subset of the larger regional ETR network, the City of Portland is incorporating active transportation into the city’s emergency response plans through a process called Bike ETRs (BETRs)*.”

*The City of Portland is running a parallel process to update the Portland Mitigation Action Plan that kicked off last month and is expected to wrap up by November 2021.

Another section of the route update project draft mentions that vehicle fuels derived from oil, fossils, and electricity might be unavailable to the public “for an extended length of time.” Cycling and walking are also being prioritized because they may be the only option for people without access to public transit.

The specific recommendation from the report says that, “future joint transportation and emergency planning at local levels should incorporate bike and pedestrian access to their LETRs (Local Emergency Transportation Routes) and LERRs (Local Emergency Response Routes). An option could include isolated lanes on main LETRs or separate facilities that are provided specifically for non-motorized uses.”

It is very cool to see biking included in this effort! I just learned about the project this morning, so stay tuned for more info and updates as the plan moves toward final adoption. See the official website to learn more.

Will This mean we could get bike lanes on Powell?

Powell has a bike lane. From 100th to Fred Meyer on Gresham.

Would this mean they would have a plan to keep the bike lanes on the Burnside Bridge clear?

As of yesterday, when I last crossed the bridge, they were full of about two feet of dirty slush that had been plowed there.

That’s a question for the county.

This photo makes me happy! I really love his bikes and bike things. I still use his trailer monthly 10 years after I purchased it.