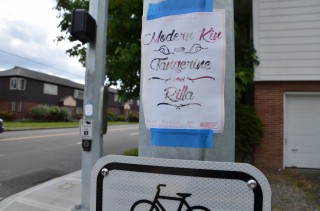 I drove a car on Sunday. (No shame here — I needed to get to Jantzen Beach and back before Game of Thrones.)

One of the things I noticed was the fact that when you’re on a freeway, advertising becomes a significantly larger part of your life.

In some ways, of course, spending one’s transportation time away from commercial messages is nice. But in other ways, advertising does actually give you useful information, such as the news that it’s berry season at a local fast-food chain or the fact that a certain car wash offers a monthly subscription for unlimited washes. 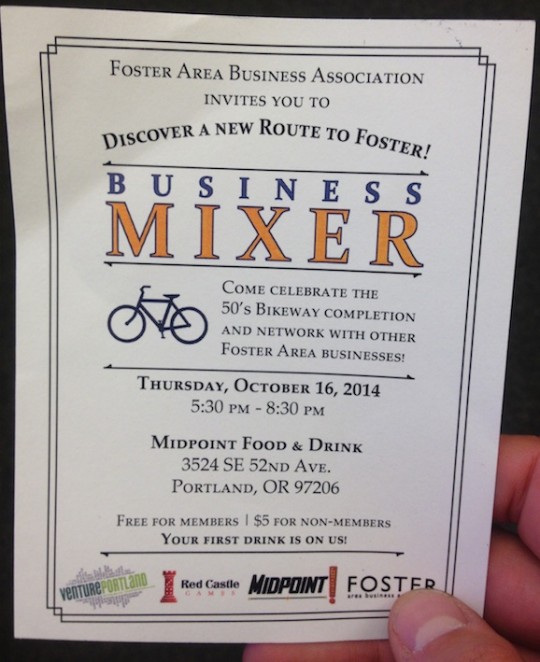 Here’s something that counters a popular narrative in this town that businesses don’t support cycling: the Foster Area Business Association (FABA) is hosting a mixer tonight to celebrate the completion of the City of Portland’s 50s Bikeway project. 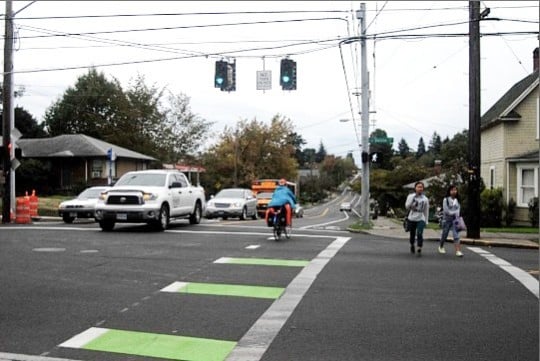 The new green-striped bike lane in front of the new bike box at 52nd and Division creates a more visible crossing.
(Photos: M.Andersen/BikePortland)

After more than a year of delay and months of construction, the 50s Bikeway is looking great, and two of the most important components are in place: comfortable crossings and traffic semi-diverters at two major streets. On Tuesday, I swung past to get some photos. 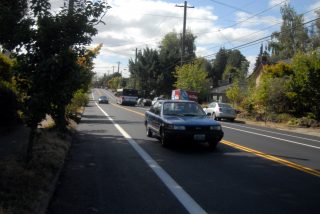 It’s easy to see how this new bike lane
could be mistaken for parking space.
(Photo: M.Andersen/BikePortland)

The new northbound bike lane on 52nd Avenue between Woodward and Division replaced a parking lane, but since July we’ve heard from many readers that the stripe of paint hasn’t stopped people from leaving their cars and garbage cans there.

City traffic engineer Eva Huntsinger said in an interview Thursday that “no parking” signs will go into the commercial node north of Woodward after a discussion about the subject by city staff late last week.

Hopefully these signs will make things safer for people like reader David Ross, who got in touch in July to share his thoughts.

I had my maiden voyage on the new se 52nd bike lanes today. Nice. @BikePortland pic.twitter.com/35eHXfePN1 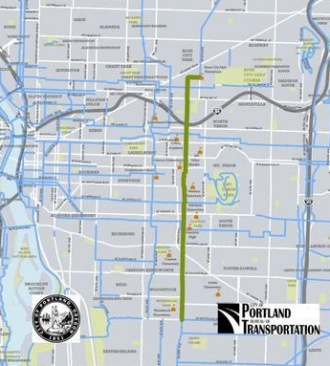 Today the Portland Bureau of Transportation announced that a project first identified as a priority in their 1996 Bicycle Master Plan has finally broken ground. Yes, at long last, the 50s Bikeway is officially under construction.

PBOT accepted the $1.5 million federal grant for the project in January of 2010 and has spent the last four years completing the public process, design, and development of the project. In 2013 PBOT was forced to delay the project an entire year due to construction costs that came in higher than expected.

Here’s more about the project from PBOT’s announcement: 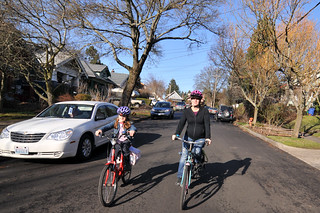 One holdup after another, but still moving.
(Photo by J. Maus/BikePortland)

Maybe it’s a mark of the eastward spread of low-car life that someone seems to ask us every few days when the 50s Bikeway is going to finally start construction.

The latest word from the city: early May. Hopefully.

“The contract prep has taken longer than expected,” project manager Rich Newlands wrote in an email last week. “But we do now have the pre-con[struction] scheduled for 4/29. In theory, the notice to proceed will be issued that day and within a week the contractor will start. But, still contingent on the contractor being timely in submitting all the final pre-construction submittals.”

Better rides are ahead for Portland’s low 50s.
(Photo by J. Maus/BikePortland)

After sitting on ice for a year while the city waited out high construction costs, Portland’s north-south 50s Bikeway is alive and moving forward.

The 4.3-mile, $1.5 million route down Portland’s middle east side, which was delayed last August, is likely to start construction in late March and wrap up by late July, the project manager said Wednesday.

When finished, it’ll stretch from the Alameda Ridge south to Woodstock Street along 53rd and 52nd avenues (PDF), connecting the Rose City Park, North Tabor, Mt. Tabor, South Tabor, Richmond, Creston-Kenilworth and Woodstock neighborhoods, which include 20,000 residents and 12 schools. North of Division, it’ll be a neighborhood greenway marked with sharrows and directional signs; south of Division, a pair of 6-foot painted bike lanes on either side of the street.

They’ll have to wait a bit longer
for a quality bike route.
(Photo © J. Maus/BikePortland)

The City of Portland Bureau of Transportation has announced a delay in the construction of the long-awaited 50s Bikeway Project. The $1.5 million, federally-funded project that will create an important north-south bikeway along 52nd and 53rd Avenues between southeast and northeast Portland, was originally slated to begin construction this summer. However, according to PBOT Project Manager Rich Newlands, the City received bids to complete the work that were “significantly above the project’s construction contract estimate.” This unforeseen situation means construction won’t begin until February 2014. 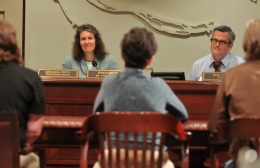 The $1.5 million, federally funded project will fill a 4.3 mile gap in the north-south bikeway along 52nd and 53rd Avenues from SE Woodstock to NE Thompson. A mix of bike lanes and bike boulevards, along with crossing improvements at eight major arterial streets, will connect the nearly 20,000 nearby residents and 12 schools within a half-mile of the route with a low-stress biking experience. 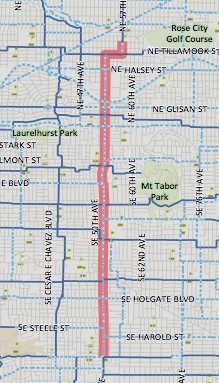 The 50s Bikeway project will be up for a vote at City Council today. While it’s expected to get the required three votes of support, you can also expect some loud opposition to one specific piece of the project — a diverter planned for SE 52nd just north of Division.

Before I get into that, here’s a quick reset of the project: The $1.5 million, federally funded 50s Bikeway will create a 4.5 mile bike-friendly corridor on 52nd/53rd Avenues from NE Thompson to SE Woodstock. The public process for the project began back in January. Since then, the Bureau of Transportation (PBOT) has held a robust public process (41 public meetings) that wrapped up with the second of two open houses at the end of June. 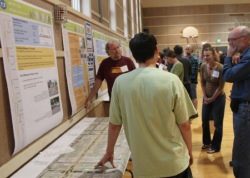 The Portland Bureau of Transportation (PBOT) is just weeks away from asking City Council to formally adopt their final design recommendation for the 50s Bikeway Project. The $1.5 million federally funded project, which was first identified as a priority 15 years ago in the 1996 Bike Master Plan, will improve bicycling conditions on a five mile section of 52nd and 53rd streets between the Woodstock and Hollywood neighborhoods.