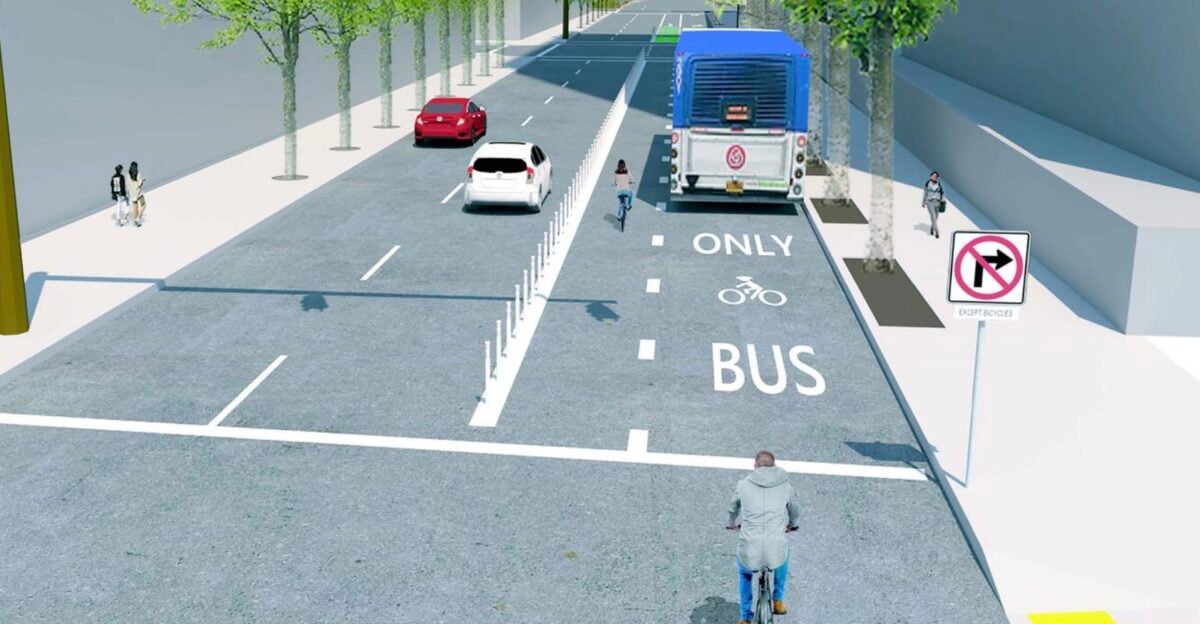 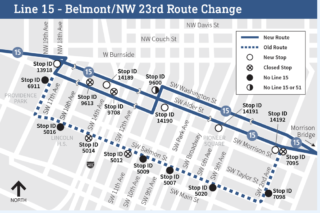 This week, the Portland Bureau of Transportation will break ground on the Southwest Alder Street Rose Lane project, a project that emerged from PBOT’s Central City in Motion (CCIM) plan to improve active transportation infrastructure in inner Portland.

Rose Lanes are Portland’s name for projects that include a dedicated lane for transit in order to cut down on travel times for people who are not using a car. In this case, the project also includes new space for cycling.

PBOT will work in tandem with TriMet, which will relocate its Line 15 bus a few blocks north from its current location on Salmon St up to Alder St to support this project. The new TriMet Line 15 will go across the Morrison Bridge, with a dedicated eastbound “Rose Lane” between SW 4th and 2nd avenues. According to PBOT, this will “relieve a major pinch point in the transit system, benefiting the thousands of Portlanders.” 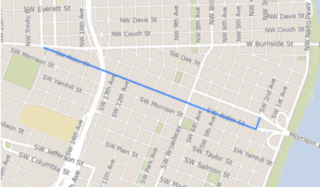 The area this project will impact. (Source: PBOT)

In addition to bus service changes, this project will also create two new downtown bike lanes – one parallel to the Rose Lane going eastbound on Alder between 4th and 2nd and one northbound on 2nd Ave between Alder and Washington streets. This will connect to the bike lane north of Washington, as well as providing a connection to PBOT’s much-hyped 4th Ave Improvement Project. PBOT says these bike lanes will be “protected,” but exact details on what that protection will entail remain to be seen.

There are more changes to come as a part of this project, like crosswalk visibility enhancements along Alder St and the installation of asphalt transit platforms. The construction is scheduled to be completed within two months, but buses will start serving the new stops on May 15.

In an article we wrote in December previewing the CCIM plans set to get going this year, we talked to transit consultant Jarrett Walker about the importance of smaller-scale projects like this.

“Even though these are small segments, they mean big improvements in reliability for transit,” Walker said.

Especially in an area as compact and congested as downtown Portland, making changes to small segments can mean a lot for people’s commutes, with safety and accessibility changes hopefully encouraging them to try riding the bus or biking instead of driving a car.

With the soon-to-officially-open Better Naito Forever and other CCIM projects underway, the pieces of improving active transportation infrastructure in Portland’s Central City are falling in place. (Who knows, we might even get the Thompson Elk Statue bike lane on Main St!)

At one point there was a contraflow bike lane shown for one block heading West along Alder coming off the Morrison Bridge. Is that a thing still to help people go North on 2nd from the Bridge?

This project is an example of wasted resource at PBOT and Trimet. Alder is a parking lot everyday after 4. The bus ran on Salmon for 10+ years. Salmon is equipped to handle traffic, while Alder is not. They did this to save “2 minutes of commute time for bus travelers”. This project was created prior to COVID and not reanalyzed in the present. The continued plan to destroy the livability of downtown Portland thrives.

Vote Up0Vote Down  Reply
« What a Metro ‘technology strategist’ says about regional transportation trends
The driver of this Subaru killed someone walking across SE Powell. Let’s find them »