What a Metro ‘technology strategist’ says about regional transportation trends 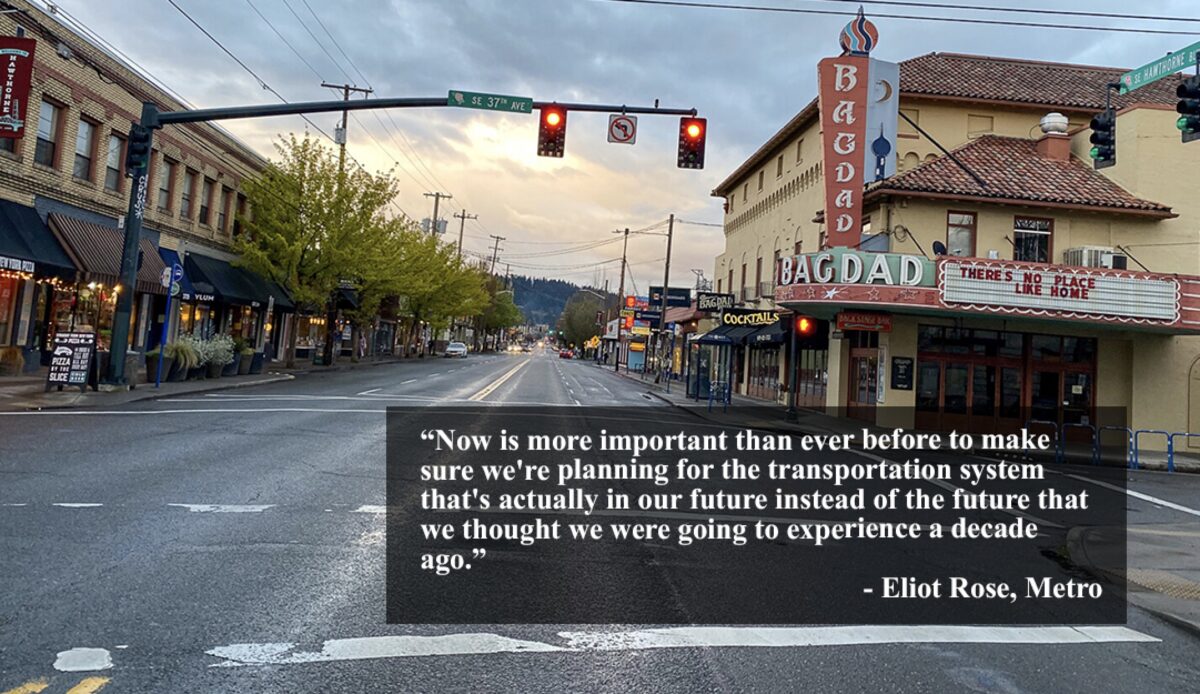 The adage that we can’t understand the future until we acknowledge the past has never been more important given how the pandemic has reshaped our behaviors over the past two years.

That’s in part why our regional planning organization, Metro, employs a planner whose job is to simultaneously peer into a rear-view mirror and a crystal ball. Metro Technology Strategist Eliot Rose shared his insights at the Oregon Active Transportation Summit (hosted by The Street Trust) on Tuesday titled, Backing into the Future. Rose presented data and assumptions he and his team have made as part of their Emerging Trends Report that will help inform an update of the all-powerful Regional Transportation Plan. 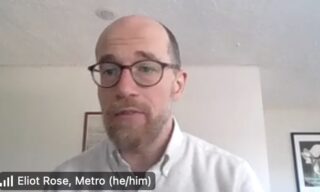 Here are some of his quotes that caught my attention;

“Now is more important than ever before to look back and really think carefully about peoples’ behavior change and what might stick, so we can make sure we’re planning for the transportation system that’s actually in our future instead of the future that we thought we were going to experience a decade ago.”

“We’ve talked about alot of adaptations and changes like tele-working or online shopping, and people are very preoccupied with understanding how those things are changing now, but it’s largely affluent people who have had the time and resources to adapt in that way. Meanwhile, a lot of low-income people have continued to travel in the same ways that they have and that’s limited their access to opportunities.”

“Transit is really struggling right now… We see some concern about making sure that the transit system can continue to serve as the backbone of our transportation system. It was falling prior to pandemic, then it really plummeted. I believe we’re back up above 50% of where transit ridership was in the region [pre-pandemic], but we’ve still got a long way to go to get back up to 100%… transit fell off much more dramatically than driving and has recovered much less quickly… We may not get back up to the pre pandemic levels of ridership for quite a while.”

“We need significant increased investment in transit… in order to have the transportation system we want to see.”

“[According to data from Strava] Recreational bike trips doubled in spring 2020 and they’re still higher than they were in fall 2019.”

“Bicycle sales grew by a staggering 67% between 2019 and 2021 and e-bike sales grew by 240% over that same period. EV [car] sales remained flat. We didn’t see the same dramatic growth in EV sales that we saw in e-bike sales and clearly there’s something special going on in the e-bike sector that presents an opportunity for planning.”

“Traffic deaths rose 7.2% in the pandemic and if you factor that people were driving less, there was a 22% per-mile-driven fatality rate increase… Looking into the future. Maybe the streets won’t be as empty and maybe the speeding won’t go away, but maybe some of the habits and the stresses that are contributing to driving under the influence could stick around and could keep our streets less safe than they were before for a considerable amount of time into the future.”

“This pandemic has widened a lot of the pre-existing inequities that we were struggling with as a region… many of those issues are bigger than just transportation alone, but they lend new urgency to the transportation equity work that’s happening.”

“The number of people working from home jumped significantly by at least around four-fold. But the jump is much more significant for higher income workers. Meanwhile, lower income workers are much more likely to report that they face a choice between staying home and staying healthy and keeping jobs… Even under the lowest scenario in our projections we have significant growth in teleworking that really kind of amounts to almost adding a new transit system to our region.”

“Teleworkers seem to be traveling less during rush hour and making up with that by traveling more for errands throughout the day. This traffic is also more likely to be on local streets because it’s people running neighborhood running errands in their neighborhood… We want to see if this phenomenon is creating more traffic on arterials and local streets that might create more safety conflicts for people biking and walking throughout the day.”

When I think of looking into a crystal ball, I picture someone predicting the future. Unfortunately, this is just Mr. Rose summarizing the “Emerging Trends Report” that Metro paid money to an outside consultant for, and whose conclusion from two months ago I will quote here: “[A]ddressing these trends may require a shift in our policies and practices.” Good, great!

I had a crystal ball I would actually want to know the answer to “How will you be shifting your policies and practices?” and not “You know these trends we paid for someone else to tell us about? Here they still are, and we might want to pay attention to them at some unidentified point in the future.”

TL;DR: This was heavy on the “rear-view mirror” and very, very light on the “crystal ball” part of his job. Did he detail any changes or anything about the future at all?

Nice photo accompanying the quote about “planning for the transportation system that’s actually in our future…” Sign, SE Hawthorne, what a glaring missed opportunity that was…

So, transit will be slow to recover. Meanwhile, climate scientists tell us we’d better get our house in order in the next 36 months.

What regional decision-maker has the vision? As far as I can tell: nobody.

climate scientists tell us we’d better get our house in order in the next 36 months.

Which climate scientist said that?

From this April 4 IPCC report

An emissions PEAK in 2025 is hardly getting our house in order. Until people start treating climate science with a little more gravity and honesty I don’t think we will see much progress in the USA.

When I read, “instead of the future that we thought we were going to experience a decade ago,” I immediately thought of the population forecasts from a decade ago. Are we still going to have as many people moving to Portland as was predicted back in those days?

According to Metro’s 2060 Growth Forecast (published in 2016), that population growth had already slowed. I wonder how how things stand now.

If something can’t continue forever, it won’t.

“[According to data from Strava] Recreational bike trips doubled in spring 2020 and they’re still higher than they were in fall 2019.”

As long as they only have to “plan” for the future, and don’t actually have to DO anything, it should be fully achievable.
😉