[Publisher’s note: With Lisa Caballero’s recent move to Paris, David Stein will step in to be our southwest Portland correspondent. This is his first piece. Welcome David!]

“It feels like someone somewhere has decided that Hamilton isn’t getting sidewalks.” This was uttered after talking with Ryan Bass, a transportation advocate in the Bridlemile neighborhood, about the recent history of work (not) done on SW Hamilton Street between SW Dosch and SW Scholls Ferry Rd.

Because of the hills, lack of bike lanes and little-to-no shoulder space, it’s hard to get around many parts of Southwest Portland without a car. It’s exceedingly expensive to retrofit roads in this part of the city with amenities that other parts of Portland have due to topography and stormwater requirements. Complicating this picture are waivers of remonstrance and an absurd degree of inconsistency by the Portland Bureau of Transportation (PBOT) when it comes to development requirements.

This is the first of a three-part dive into how a single road has managed to simultaneously garner notable attention and fail miserably to capitalize upon it.

First, let’s make sure we all understand the profile of Hamilton between Dosch and Scholls Ferry:

There are two SW Trails (a local walking and hiking network) in the neighborhood. Trail 1 uses Hamilton between 53rd Ave and Fraser Ave, just west of Scholls Ferry Rd. There is a short stretch where Trail 7 jogs from Hamilton Ct west to SW 35th Pl where it continues to the north. While these are signed trails it would be charitable to call them walkable. There are scant shoulders on both stretches of trail and west of 53rd Ave there are multiple hills where visibility drops to dozens of feet due to the topography. 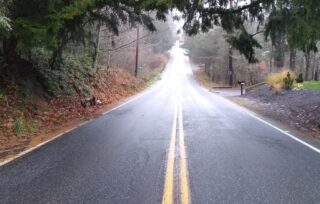 The speed limit is 25 mph, recently lowered from 30 mph. There are also about a dozen speed bumps to slow down vehicles, though like most speed bumps some are more effective than others.

Sidewalks are virtually non-existent on Hamilton. There is a short stretch from (almost) Scholls Ferry to 20 feet east of 63rd, Semler Way has two corners with curb cuts and it continues until just before Selling Ct which doesn’t have a sidewalk on the west side of that street. On the east side of Selling the sidewalk starts up again for maybe ten feet — so if you want to go down the sidestreet that sidewalk could be quite useful. There are three more street corners with a sidewalk, however none actually extend along Hamilton.

This sidewalk coverage is not out of the ordinary however. Based on a June 30th, 2016 PBOT street inventory, Bridlemile had 2.8 miles (9.1%) of sidewalk as of 2015. In contrast, 5.9 miles were paved without curbs. The sidewalk coverage was 9th lowest in the city. Of the eight neighborhoods with a lower percentage of sidewalks, six were also in southwest Portland and the other two were in northwest (Forest Park, Sylvan-Highlands).

People ride bicycles on Hamilton as part of their commute during the week. On weekends you are likely to see people doing training rides on their way to or from Council Crest or the Fairmount loop. Hamilton is more direct than Patton to the north and has considerably less traffic than Beaverton-Hillsdale Hwy (one of Portland’s 20 High Crash Corridors).

Walking and running are slightly less popular on this road. Parents will escort kids on or across the road to and from school though it’s rare to see older kids using the road except to wait for a school bus.

Traffic counts from November 2020 at Hamilton and 47th Ave show about 1,400 cars being driven on the road.

Now that I’ve set the scene, the next article will dive into a couple of projects that improved conditions for vulnerable road users while leaving critical gaps to access.

David is a guest writer based out of SW Portland. He has been a regular bike commuter since 2012 (until COVID). While David is currently Chairperson of the Portland Bicycle Advisory Committee all opinions are his own and do not reflect the feelings or position of the BAC. Contact him at davidsteinbp@gmail.com

Thanks for writing this David and looking forward to hearing more about SW. I went to Lewis and Clark and was very concerned about SW infastructure back then but since graduating and moving to the eastside I honestly do not go to SW very often and have not been keeping track of what is happening over there. Would love to hear your thoughts on the red electric trail at some point and the story of that. Also, what is Don Baack up to?

Maybe you missed them but Lisa did a few articles on Don and the Red Electric recently.
– Here’s an opinion piece penned by Don himself
– And here’s a closer look at the Red Electric where he’s featured prominently

Hi Kiel, I’ll be providing updates and thoughts on the Red Electric Trail bridge that’s being built among other things. If you have ideas let me know! I know SW somewhat well, which really means there’s a lot left to learn and it’s hard to keep track of everything that’s happening. Thanks for the warm welcome!

Congrats on the new gig, David!

Thanks Allan, we’ll see how it goes 😉

Do you have any crash data for the roadway?

Good question! I checked out PBOT’s Interactive Crash Map and there are no reported crashes on this stretch of road from 2010-2019 (data not available for 2020 and 2021).

Earlier this year a neighbor contacted me about a crash they were involved in on their bike that had them shaken up and the wheel damaged. It was at the intersection of Hamilton at Shattuck, where there’s a 4-way stop with a flashing light that has poor sight lines and topography that causes problems for everyone using it. It’s tough to know how many of these incidents have happened since they aren’t reported through ODOT.

I think there have been crashes on Hamilton at Scholls Ferry Road in from 2010 to 2019. There was a SUV and car crash derby in the snow nearby around 2017. It was about eight automobiles and blocked the entire street.

David, my question directly relates to your “This is the first of a three-part dive into how a single road has managed to simultaneously garner notable attention and fail miserably to capitalize upon it.” PBOT has very limited funds and more-or-less unlimited needs citywide. “Reported crash data” is among the many tools PBOT uses to evaluate the multiple demands upon its funds, along with the data you have provided. I’m sure staff at PBOT understand that Hamilton needs some love, but given other factors, other streets seem to have a higher priority.

I agree with you that SW Portland, like East Portland, has been overly developed towards the automobile and most streets in SW lack basic sidewalks and safe bike infrastructure, and such areas deserve better. The same is true for East Portland, Cully, and Brentwood-Darlington. It is often reported crash data the frequently determines if a street will get needed bike and walking infrastructure or not. Or to put it another way, bicyclists and walkers in SW need to get into the habit of reporting all crashes, no matter how minor, to the various data collection authorities, if there is ever to be any hope of PBOT making SW streets a higher priority.

Yes full and accurate crash data would probably help if that is the only reason to build safer infrastructure. SW Portland had a 1% bike commute rate last I checked which was lowest in the city. Similarly there are regularly 50-75 cars pick up and dropping off kids at school each day among those not taking the bus, at least equaling the number of people walking and biking. This is all to say that a lot of people refuse to walk or bike in current conditions and have the means to avoid it rather than being forced into dangerous situations, perceived or otherwise.

Without spoiling the rest of this too much, as I’m still finishing up the third article, there’s a feedback loop here and it’s been a race to the bottom. PBOT, and other bureaus, aren’t able to dedicate funds in this area for well understood reasons which are then utilized by developers to diminish their responsibility to improve the built environment. When the city comes back with more funding, the cheapest possible option is deployed because they know they can get away with, though it could be the reason funding was available, it since developers have been putting in the same thing.

I used Hamilton quite a bit my first year in Portland, living in an apartment on BHH. It was about the only “back” road that went through and was actually straight.

I live in SE and work in the Washington Square area. When I was going to the office more frequently I used to enjoy going up to Council Crest and then breezing down Hamilton for that westbound morning commute. Think I tried it just once or twice going the other direction – it wasn’t much fun chugging along uphill with all the cars blasting by.

Thanks for the SW coverage! Looking forward to reading the rest of the series.