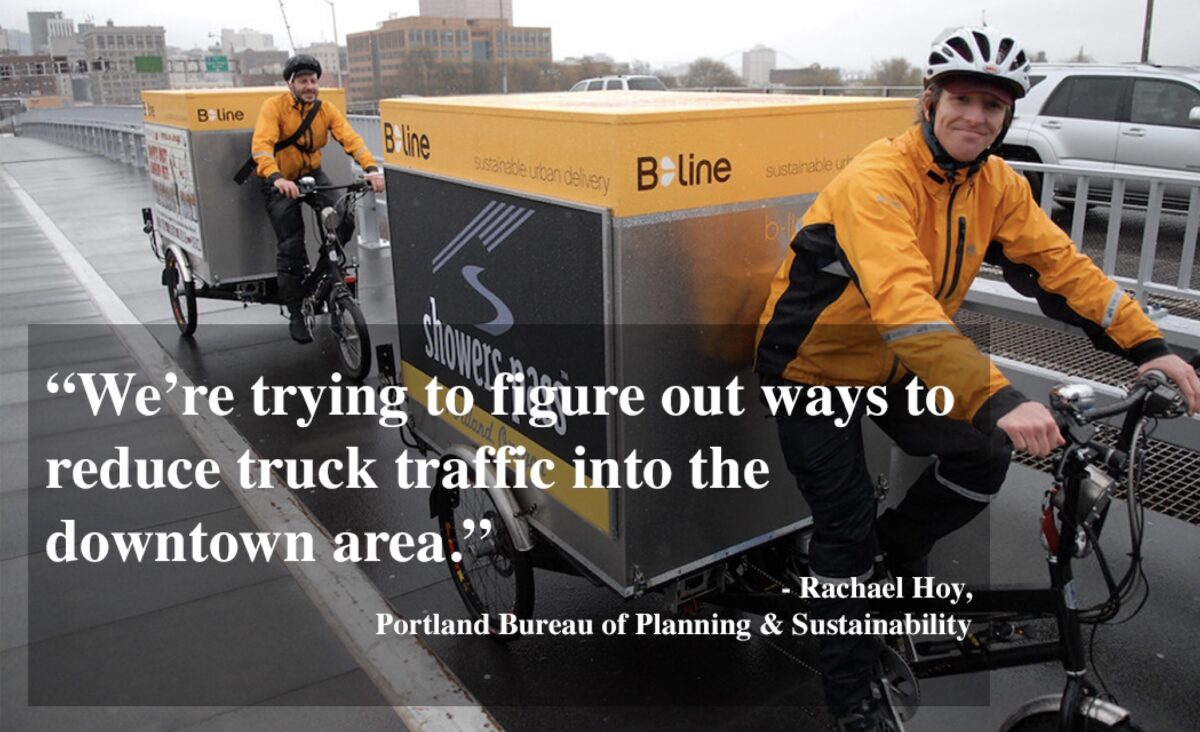 The City of Portland is considering a new type of use for streets that would lead to cleaner and greener deliveries: They call them “micro delivery hubs”.

At a meeting of the Old Town Community Association land use and transportation committee in mid-September, Portland City Planner Rachael Hoy with the Bureau of Planning and Sustainability outlined several initiatives under consideration. Along with more public plazas and food cart pods, Hoy said the delivery hubs could be one project funded by federal Covid relief grants. “We’re trying to figure out ways to reduce truck traffic into the downtown area,” Hoy shared. “So we’re looking at options for micro hubs in different parts of the city that would allow for some of these last-mile deliveries to be done by trikes and bikes.”

Having space set aside for smaller footprint, even pedal-powered delivery vehicles to pick-up and drop-off packages is something long championed by B-Line Urban Delivery. B-Line launched in 2009 and today maintains a fleet of cargo trikes that deliver all manner of payloads to dozens of clients in the central city (and beyond).

B-Line founder and CEO Franklin Jones sees a future city dotted with “a micro hub network” at locations that not only offer emissions-free delivery services, but also act as job creation centers, charging stations for light electric vehicles, and community gathering spots. “B-line has always had a vision of expanding our services through micro hubs and we are actively pursuing partnerships for a concept of neighborhood hubs that would stack multiple functions,” Jones shared in an email to BikePortland. “We are particularly interested in partnering with community organizations around job development so as to be able to hire from the direct communities that are being served.”

Another thread converging around this micro hub idea is the Portland Green Loop. Friends of the Green Loop Executive Director Keith Jones sees the loop as playing a central role as a route for small, electric delivery vehicles and a staging area for a future freight network. He’s sketched out a concept of hubs that would be located in the central eastside. Jones also envisions one of the first zero emission freight zones on West Burnside adjacent to the Ankeny Cart Blocks and is already seeking grant funding to make it happen. Jones also wants to use space already permitted by PBOT as Healthy Business plazas as pick-up and drop-off zones.

BPS planner Rachael Hoy is still planning out the agency’s approach and is meeting with industry leaders (like Keith and Franklin Jones) to better understand the potential of the project.

A possible funding source are American Rescue Plan and Build Back Better funds, which Hoy said could be available in early 2022. Portland already won a $47,600 grant to improve their Healthy Business plazas and these new delivery hubs could be positioned as another way to help revitalize the central city. The Portland Bureau of of Transportation is currently assessing how best to use another $2.5 million in federal Covid relief funds towards street activation-relation projects (more on that in a separate post). And as we reported last month, Old Town neighborhood leaders see public space activation as key to economic recovery.

So I guess the PGE Mobility Hub won’t be built….
https://bikeportland.org/2019/11/20/council-moves-pges-central-eastside-mobility-hub-forward-307915