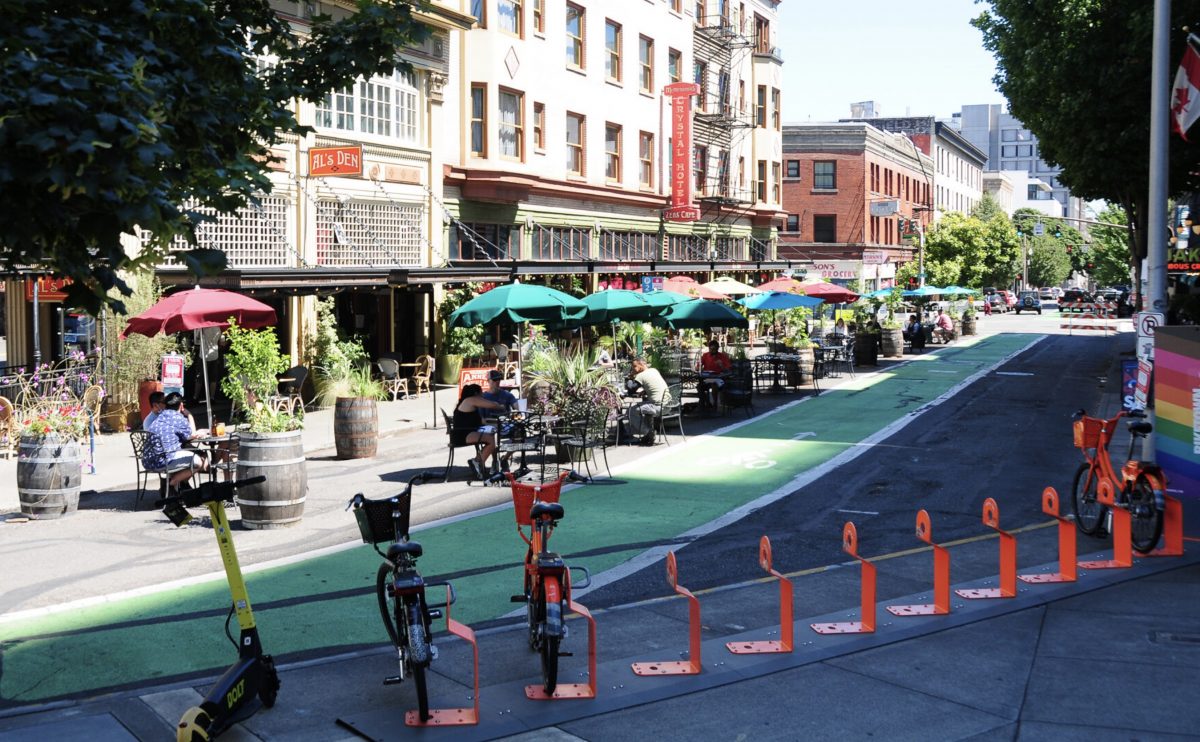 Since she was elected as city commissioner in November 2018, Jo Ann Hardesty has shared vision of Portland where it’s easier to get around without using a car. Just weeks after she was handed responsibility of the transportation bureau at the start of this year, her policy director said “closing some roadways permanently to car traffic” was Hardesty’s top priority.

On Thursday Hardesty announced seven public plazas she said are, “a wonderful first step towards this vision.” The announcement was part of a larger campaign from the Portland Bureau of Transportation to encourage people get outside and take advantage of rising vaccination rates and temperatures.

For almost a year now Portlanders have become used to the site of restaurants and businesses using street space for dining and other activities as part of PBOT’s Healthy Business program (part of their multi-pronged Safe Streets Initiative to respond to the Covid-19 pandemic that was announced one year ago today). While these plazas are more evolution and less revolution, they mark a steady march forward from PBOT to fulfill Commissioner Hardesty’s vision — rooted more in a spirit of access and equity than a “war on cars”.

“These community meeting spaces where we have benches and trees and music and art and all sorts of stuff. I’m really excited that we are looking at how do we do that all over the city.”
— Jo Ann Hardesty, city commissioner 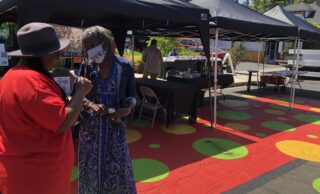 PBOT has always had an outdoor dining permit program, but it was limited to the sidewalk. Those permits expanded when Covid hit to allow takeover of curb lanes and even full streets. Now PBOT is taking even more steps forward. A $47,000 grant from Travel Oregon last month and $3.5 million in the city budget (via the American Rescue Plan) to support the program gives PBOT the validation they need to continue, solidify, and expand the plazas.

The first batch of seven plazas reveal partnerships with local organizations and businesses and new programming that take these spaces to the next level. Some of the locations announced yesterday already exist as dining plazas and others aren’t scheduled to open until next month.

At a PBOT Bureau Budget Advisory Committee meeting on May 20th, Policy Director for Commissioner Hardesty Derek Bradley hinted that his office sees these one-block plazas as just the first phase of a larger plan that would lead to larger carfree spaces. “She’s definitely interested in exploring multi-block closures, sort of like a real expansive plaza creation… and that’s something she’d love to see in all corners of the city. So yes, we expect to see more of this. Should Commissioner Hardesty keep PBOT for a long period of time, expect to see more of this programmatic planning to come to fruition.”

Two days before that budget meeting, Hardesty attended a meeting of the PBOT Pedestrian Advisory Committee where she reflected on her May 15th visit to the Dream Street Plaza, a “Black-centered Space for community and microenterprise in historic Albina” located on North Sumner and Martin Luther King Jr. Blvd. “It was exactly what I had imagined when I inherited PBOT,” she said excitedly. “These community meeting spaces where we have benches and trees and music and art and all sorts of stuff. I’m really excited that we are looking at how do we do that all over the city.”

“At some point we need to figure out how it’s funded,”
— Chris Warner, director of PBOT

Hardesty’s lived experience in east Portland helps explain why she’s so enamored with carfree spaces. “Where I live we don’t have spaces where people just come together to congregate,” she told the committee.

But if she wants to create more of them, funding will be an issue. These plazas are free of cars but they aren’t free of expenses. PBOT staff time, lost revenue from parking spaces, equipment rentals — the city’s cost will go up as they build the program. So far one reason the business permits have been so popular is that they’re free. Eventually PBOT will need to charge for them.

“At some point we need to figure out how it’s funded,” PBOT Director Chris Warner cautioned at this month’s budget advisory committee last week. Derek Bradley said the commissioner is, “Dedicated to figuring out long term funding mechanisms” and that the conversation dovetails with Hardesty’s other big priority for PBOT: How to wean the agency off their counter-productive reliance on fossil-fuel funding sources like gas taxes and auto parking fees.

Those tough funding conversations will be much easier with such a strong champion for the program. During her visit to the Dream Street Plaza earlier this month, her love of the idea — and how it fits with her vision of post-pandemic recovery — was on full display: “I am so looking forward to the city we get to build. I refuse to go back to what we had!” she exclaimed while standing on the brightly painted street. “I’m not going back! Are you going back?!”

Here’s are a map with the locations and descriptions of the plazas announced yesterday;

The NW 13th Plaza could be built much better for cyclists, see 28th. Its been a real pain when I have had to occasionally go to the office to get off the Flanders Greenway westbound and get onto the 13th southbound which is one of the only good connections to Goose Hollow.

I wish her vision for carefree spaces included Protected Bike Lanes on Hawthorne.

(Hopefully you won’t censor this Jonathan as I know you try to limit criticism of Hardesty). Thanks.

I’m in favor of PBLs on Hawthorne too, but even a cursory glance at the comments in those series of articles shows Jonathan doesn’t “limit criticism of Hardesty.” He tries to limit racist and sexist attacks, and I’m glad he does. But plenty of people in comments have criticized Hardesty.

Also, related, a private blog deciding which submissions from readers it chooses to publish at its own hosting (and reputational) costs is not “censorship.” Freedom of expression limits governmental suppression of your speech, it doesn’t guarantee you to speak in any space on any topic no matter what. If PPB starts showing up at your door because you criticize Hardesty, let me know and I’ll be fighting on your side. In the meantime, getting your comments moderated is not censorship.

Ivan,
Jonathan has specifically stated in this blog that he gives extra consideration and censorship/moderation to comments on Joanne Hardisty solely because she is a black woman. This of course is problematic if you can’t criticize an elected official because they are of a certain ethnic group. He did get some pushback on this and I have noticed he has been putting some criticism through on Hardesty.

Of course I agree with you that Jonathan has the right to censor whatever he wants since it is his blog. But since he does try to make it more of a journalistic endeavor it does seem like censorship if he doesn’t allow criticism to be posted for certain types of people yet allow it for others.

Hi Cleo. You have apparently misunderstood my comments.

Jonathan has specifically stated in this blog that he gives extra consideration and censorship/moderation to comments on Joanne Hardisty solely because she is a black woman.

Yes this is true but you missed the part where I said I offer extra consideration to all news subjects when I deem it necessary. That’s how I run my website. It’s not a place for people to be mean to folks who are doing work.

This of course is problematic if you can’t criticize an elected official because they are of a certain ethnic group.

This is your opinion and is not based in facts whatsoever. I am absolutely OK with criticism, but the tone and tenor matter. I get to judge which comments pass through because this is my place of business. If I don’t feel comfortable with a particular comment/criticism, I will not let it through. I don’t care what it says.

Again, everyone is free to criticize anyone… As long as it can be done with respect and tact. Challenge yourself to be a good critic, not just another web pile-on mob pushing b.s. narratives and hurting people for no good reason.

Thank you for your comments.

This is really encouraging to hear such direct talk in support of pedestrian car free spaces. This is really the one thing that I miss living in the US in general, so hearing the conversation shift is really encouraging. The potential here in Portland is huge considering the other assets we have (neighborhood commercial areas, parks, etc) to create something really special if we can even just reclaim 5% of the street grid for people instead of cars. I think if more people could experience that kind of pedestrian sense of freedom in other cities where it already exists on a much larger scale, it would get more support. It’s hard to describe without experiencing it on a larger scale. Half jokingly I tell people it’s a bit like Disney world…

Some of these feel a little shoehorned in to make the program seem bigger — like, OK, they’re “closing” the deadend Caruthers St. where it exists as a vehicle turnaround in front of Portland Opera, and they’re going to have a radio station on Madison “Plaza” aka the already pedestrian-only stretch of Madison St. that PAM does everything in its power to make you forget is still a public right-of-way.

I am glad to hear that Dream Street, Pride Plaza, and Parkrose Marketplace (on the map) are becoming more official. Hopefully this is but a small beginning.

These are pimples on the face of the moon. Tiny disjointed efforts like all of the bike infrastructure over the past and coming decades.

Instead, remove on street parking from 15% of the roads where retail/commercial exist and link them together by next year. Done.