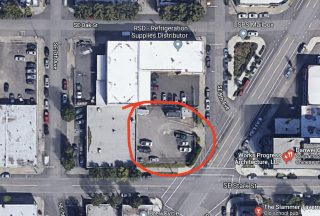 By this summer there could be a new place in the central eastside where you can stop and grab lunch, surf the web, and charge your e-bike.

Today at Portland City Council, plans to redevelop a 10,000 square foot parking lot on the corner of Southeast 8th and Stark into the the region’s first “Mobility Hub” were strongly supported by Mayor Ted Wheeler and three commissioners. Portland City Council unanimously approved an ordinance (PDF) that will change zoning codes and allow the lot’s owner, Portland General Electric, to develop a public plaza that would include a host of free amenities with a focus around electric vehicles.

In a presentation from PGE, they say the Mobility Hub would, “Create an inviting and equitable community space that showcases electrified transportation of the future, integrates the street to the neighborhood, and can serve as a model for future hubs around the region.” (Its location one block off the future Green Loop is considered a big plus.)

Portland’s zoning code has provisions for temporary pilot projects, but currently limits their duration to two weeks. The lot is also zoned for retail sales and service, which allows just 5,000 square feet of buildings and exterior areas. PGE asked council to waive and modify these codes in order to maximize the space and have their project last longer than two weeks.

Mayor Ted Wheeler is a big supporter of the project. He sees it as a “key partnership” with a private company that’s in line with Portland’s Smart City initiative. “I just love the innovative nature of this,” he said at council today.

PGE Senior Manager of Transportation Electrification Shanna Brownstein is spearheading the project. She offered a rough budget estimate of $350,000. Some of the funding will come from PGE’s Clean Fuel Rebate program, a source of monetized energy credits from residential electric vehicle owners. An additional $50,000 is expected to come from parking revenue funds doled out by the Central Eastside Industrial Council’s Transportation and Parking Advisory Committee (which is currently seeking new members if you’re interested).

In a phone conversation today, Brownstein said the design of the site will be flexible. “We want to include as many modular pieces as we can to meet the needs of the community. Things like bike valet, e-bike battery swaps, whatever people need. Learning how people want to use the site is the goal.” Brownstein and Wheeler emphasized that this is truly a pilot and they’ll tweak the formula as they go depending on feedback and how people use the space.

Asked about accessibility of the site for “regular folks” by Commissioner Jo Ann Hardesty, Brownstein said ensuring access for lower-income people and Portlanders who live on the street has been a focus since the start. “The public restroom was an idea from the Mayor’s office,” she shared during testimony today, “The idea there is really making that site accessible for the homeless and houseless population.” Free wi-fi is important for people who want to access bike and scooter sharing systems but who don’t have robust cell phone data plans. Brownstein also said she has met with the Portland Police and Parks and Recreation bureaus to think through concerns about people sleeping and erecting tents on the site. She cited the theory of “crime prevention by design” as one of the designers’ core principles.

Permitting is underway and construction is set to begin in March. PGE hopes to have the site finished by this summer so they can cut the ribbon and have something to show off when Portland hosts the International Electric Vehicle Symposium June 14-17th.

This should be interesting…and required by any cluster of new larger apartment complexes if there is appropriate space.

Matt S.
Reply to  middle of the road guy

I should be excited about innovative community spaces like this, but my mind immediately goes to where what has happened to our multi use paths throughout the city. I wish for the best.

middle of the road guy
Reply to  Matt S.

That was honestly my first thought but I was trying to be positive.

Paul Cone
Reply to  middle of the road guy

Would be amazing if they get this right. So many cyclists as well as campers in that area.

It looks like an innovative new campground. Yeah without any rules or enforcement, just forget it.

Do you spend time in that area? Most “campgrounds” there (and elsewhere) are located in vehicle areas–vehicle parking lots, under vehicle bridges, on vehicle loading docks….

This is a great idea…I applaud this thinking, but I say that it is not ambitious enough for Portland (unless there is going to be such a site in every neighbourhood or this is just a short term redevelopment placeholder).

It reminds me of the state of practice for the late 1990s (ie. the Bikestation Long Beach v1 1997 – which was great for its budget and as a redevelopment tool with the Long Beach RDA).

My thought was that this is a sort of placeholder/testbed for new technologies/concepts. Given the services they are offering, I think an attendant will be critical.

is “crime prevention by design” different than hostile architecture?

no it’s not and even worse it tacitly assumes that people sitting/resting on public property are “criminals”.

While it’s hard to know what they are envisioning here, in my experience it typically means designing spaces that have open and clear sight lines and plenty of lighting. For example, when bus shelters moved away from solid materials for walls to transparent glass or overhead shelters that were easy to see through. I think the idea is to not create corners or spaces that are out of easy public view.

See the rocks deposited by Trimet (with city approval) on the SW Harbor multi-use path connection to SW Moody for one recent example.

I don’t think citing ODOT’s boulders is a fair way to present CPTED. CPTED has been around for decades and AFAIK is a relatively well-respected approach to urban design. Pretty sure Jane Jacobs is one of the people who came up with the idea in the first place. There are smart things urban designers can do to make spaces feel safer and be safer from crime – without making them harsh on homeless people.

I agree that there are things that people can do “to make spaces feel safer … without making them harsh on homeless people”. However, CPTED has served as the inspiration for racist broken windows policing and has been used to justify the use of landscaping and “rockscaping” to exclude people from resting in public spaces. Based on this historical legacy I have reason to be critical of the phrase “crime prevention by design”.

I’m also no fan of Jacobs. She disparaged affordable/social housing and served as inspiration to preservationist nimbyism and urban gentrification (e.g. new urbanism). Her opposition of Moses’ freeways does not erase this other legacy, for me.

Good points Soren. I hear you about how CPTED has been abused and also about Jacobs’ legacy. Thanks for sharing.

I appreciate these comments. Crime-preventative design, even if well-meaning, can create crime as well as reduce it. Especially when done poorly, people can pick up on cues (not just blatant ones like bars on windows) that can say, “This space has features to prevent crime, therefore this isn’t a safe place to be”, and people start avoiding those areas. It’s similar to putting up public service billboards about alcoholism, gambling, abuse, etc. Those can have the same effect as “Don’t shop or locate or invest in this neighborhood”.

Middle of the Road Guy
Reply to  soren

Non-criminals should have nothing to worry about, then.

You have to love this magical thinking.

The solution isn’t just “reduce parking”. It’s taking a very few spaces, that are private ones on top of that, then providing additional things that improve options for other transportation modes. The demand for parking spaces could be cut by much further than the few that are being removed. Why is that “magical thinking”?

This has such great potential, on multiple levels. It could provide some basic needs for those experiencing homelessness (fresh water, bathrooms), and allow for those who aren’t experiencing homelessness to co-mingle in a public space with those who are. Who knows? Maybe people will talk to one another on a more human level. Person to person.
If it works then it may lead to similar, positive changes elsewhere in otherwise unused spaces. This is on my daily commute and I’m really l’m really looking forward to it.

I hope it works and it would be even cooler if they included a package drop off service/lockboxes from Amazon or UPS. Just think how much time those Amazon drivers would save if they had a neighborhood location instead of each building.

That way, you could pick up your packages (by bike) on your cycle home. Or it could share space as a consolidator as was noted via the PSU UPS initiative that was featured here a few weeks ago…

That would also reduce traffic within whatever neighborhood they were placed in, like the Lloyd District or N Williams.

This has been proposed as an urban mobility hub in Utrecht, Netherlands. They are proposed to be located adjacent to new development where auto access is restricted (gasp!) so residents have a consolidated location to pick up a package/get a carshare/transit pass. etc.

Middle of the Road Guy
Reply to  Rachel S.

How about a weed-vending machine?

q
Reply to  Middle of the Road Guy

PBOT could run it and call it the Pot Hole.

Ok, then how much is Amazon and UPS going to pitch in for the private use of a public space?

The space belongs to PGE…

Moving up Sandy a few blocks, I would love to see that vacant (used to store vehicles) lot between 12th and 13th, Burnside and Couch acquired by the City for open space…park, plaza, square, call it what you like. Its now surrounded by new apartment blocks (yes!), but higher density hubs need public spaces to work. There must be a pile of SDC money from all those apartments, and for all I know some of that land is old Sandy Blvd, so we already own it!

Instead, we have the empty diesel CEID busses cruising around the neighborhood!

Besides, 8th and Stark is kinda far up the hill (but don’t tell PBOT, ’cause they can screw up all they want at that location as far as I am concerned!); but OTOH maybe they just want to finally gentrify the Slammer out of the neighborhood?!?!?

I think the CEID bus has been retired.

What happened to this? Seems like a big miss with the huge growth in ebikes these days…