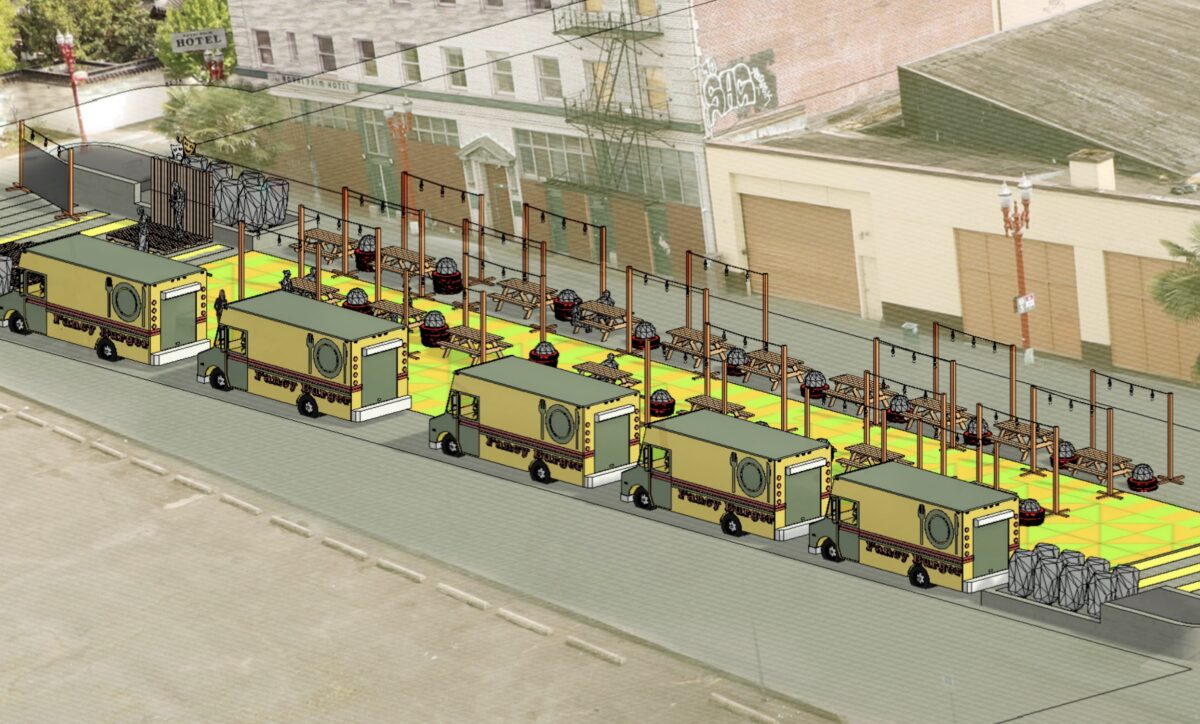 “With outdoor recreation gaining popularity during the pandemic a ripe opportunity exists to leverage existing cycling infrastructure for community and economic development purposes.”

It has been a very tough few years for Portland’s Old Town district. In 2020, 32 businesses closed their doors and according to counts by Downtown Clean & Safe, foot traffic dropped 78% compared to 2019.

Now neighborhood leaders see a light at the end of the tunnel, and there’s a person on a bike riding through it.

The Old Town Community Association (OTCA) plans to lean to their strengths as a historic district full of interesting architecture and destinations that are accessible by a variety of transit and cycling infrastructure. Their new, 42-page Post Pandemic Activation Plan puts public space front-and-center and includes conceptual designs for street makeovers they see as vital to economic recovery.

The plan was developed by Daniel Klinkert, former community development director for the OTCA, and several volunteers (including University of Oregon architecture students). Current OTCA Land Use and Transportation Chair Jonathan Cohen is already shopping ideas from the plan around in hopes of landing federal American Rescue Plan Act (ARPA) funds to help get some of them built.

(Left: Category breakdown of the 32 businesses that closed in Old Town in 2020. Right: Graph of foot traffic counts from NW 5th Avenue and Couch, and NW 1st and Davis.)

Here are some of the proposals in the plan:

Atop Cohen’s list is a food cart pot on the east side of the surface parking lot on NW 4th between Couch and Davis (a.k.a. “Block 33”). He’s also says the OTCA has made major progress to move forward on their plans for a new skatepark at Flanders and Naito. Other ideas he’s excited about include major upgrades to the current plaza on SW Akeny and 3rd (Voodoo Donuts), and a major plaza on NW Flanders.

About the Ankeny plaza, the plan states:

“While this location has seen some upgrades in the form of a distinct pedestrian travel lane, planters, and alley lighting, the surface area remains rough, undefined, and devoid of public seating. Upgrades to the space could extend the periods of time that patrons spend in this area which could lead to measurable increases in density of activity.”

And about NW Flanders, which was designated a “Festival Street” in 2008, the plan says that flashy title hasn’t helped much at all because there has been no formal management entity to program or activate the spaces.

Another concept in the plan is the use of an automated “permanent barricade system” (see illustration above) to prevent car use in sections of what is now the “Entertainment District” around NW 3rd and Couch.

The plan also says that leveraging existing bike infrastructure — and the people traffic it attracts — as a key to Old Town’s recovery. “With the recent installation of the Flanders Greenway along with existing bike lanes on 2nd, 3rd, Naito, and Broadway, Old Town may have more bike lanes per square mile than any other neighborhood in Portland,” the plan states.

Here’s more on how Old Town envisions the potential of cycling:

“If existing bike lanes running though Old Town were to be enhanced by substantial greenery, wayfinding signage, secure bike racks, and other amenities, Old Town could benefit from more cyclists riding though and parking their bikes to patron the neighborhood. The aforementioned proposal to convert the Flanders Festival street into a food-centric plaza space could also leverage this bike path for additional patronage. With outdoor recreation gaining popularity during the pandemic a ripe opportunity exists to leverage existing cycling infrastructure for community and economic development purposes.”

The exciting concepts in this plan align well with the desire for downtown carfree zones Transportation Commissioner Jo Ann Hardesty has called for. They also align with what the Portland Bureau of Transportation has recently shown strong funding and policy support for: Using streets to create inviting spaces that can lead to the economic and social activity vital to a Portland renaissance.

Here’s to hoping the OTCA can build out this vision! Check out the plan here (PDF).

Happy that bikes and people who ride them are mentioned in the report. But we should dream of the entirety of the area being people-focused with special attention to protected intersections, especially at Burnside.

Old Town will continue to suffer as long as it is a de facto homeless district.

If potential visitors have the perception it is unsafe then it does not matter how how easy the access is.

No amount of Bells and Whistles will change that.

I rode the MAX through Old Town last August. After seeing all the trash and blocked sidewalks there’s nothing that would have entised me to get off the train and shop/eat there. The MAX couldn’t move fast enough to get me out of the area that day.

Agree completely, this is a good intentioned version of putting lipstick on a pig.

Exactly. I like the vision, but let’s not confuse the niceties of these proposals with what it will take to reactivate this area. As someone who cycled through Old Town everyday for 15 years, it isn’t lack of ‘substantial greenery, wayfinding signage, secure bike racks, and other amenities’, or even the pandemic directly, now keeping me away. It’s the homelessness, lawlessness, trash, and general lack of city support for businesses. I wish the OTCA were more honest and direct with what is really needed.

The Flanders Festival Street plan appears to make the Flanders Greenway impassible by bike which to me is unacceptable given future plans to build a crossing over Naito. Seems like a much smarter idea to activate the unused parking to the north of the greenway.

Ho buoy. I’m going to say my piece and then quickly leave before I get flamed. The problem of liberal cities – and mind, I’m liberal myself – is that by being helpful to the homeless, you attract more homeless. Ever been to Berkeley or Santa Monica? I’m not saying that the homeless shouldn’t be treated humanely – I am saying that homeless benefits should be doled out equally among jurisdictions, so that no one particular area becomes more attractive to them than others.

The other thing I need to get off my chest is that tents should not be allowed to block the ROW. I was walking on a sidewalk near the SW Burnside Bridge where I had to walk in the street for some steps because tents had occupied the entire width of the sidewalk.

Yeah that Jonathan just wants to help his hotel

Another example of how bankrupt our city is that this is seriously being floated as a solution to the problems of Old Town. More food carts, street murals and dirty picnic tables are not going to solve the problem, JoAnn.

Side rant: I may be in the minority but I am so tired of this slipshod construction taking over our public spaces. Yes it is great that your restaurant has some outdoor seating but I am sick seeing of all these code non-conforming shacks built of 2x4s and corrugated plastic lining the sidewalks. That and the drug villages aka homeless camps are a daily reminder that we are going backwards as city in terms of standards.

Until we get tough on drugs and associated lawlessness, nothing is going to change. No one wants to admit it because it sucks to say No.

These businesses and neighbors will continue to disproportionally suffer the consequences as money and people go places not covered in bodily fluids and trash.

There is an entire culture apologists and enablers who think it’s just “so sad” but unwilling to expend any political capital to enact meaningful reforms around drug addiction and involuntary treatment that would solve these problems. For them it is uncomfortable to make that value judgement. See: current occupants of City Hall.

Counterpoint: I like the outdoor seating and think it looks nice

Restaurants have had to scramble to make do since the pandemic started, and anyway, this outdoor dining infrastructure exists in a semi-legal limbo of questionably permanence. They can be forgiven for not yet constructing the most sound structures. Are you really that upset by the loss of a few parking spots?

You bring up a great point about the hastiness of it. But there are areas which have been in use for years like SW Ankeny which are not well designed or built to celebrate the miracle of human life. It is common around food carts. Where once we expected white linens, silverware and table service we shiver on filthy picnic tables next to port-a-potties, bus our tables with disposable tableware and supposedly this is to be celebrated? I am not some old get off my grass grandpa. I just feel like I am bored with grittiness passed off as urbanity when the truth is our standard of living is backsliding to that of a 3rd world country. We’re not hip, we’re broke.

Sounds like a giveaway of public space to private enterprise. No thanks.