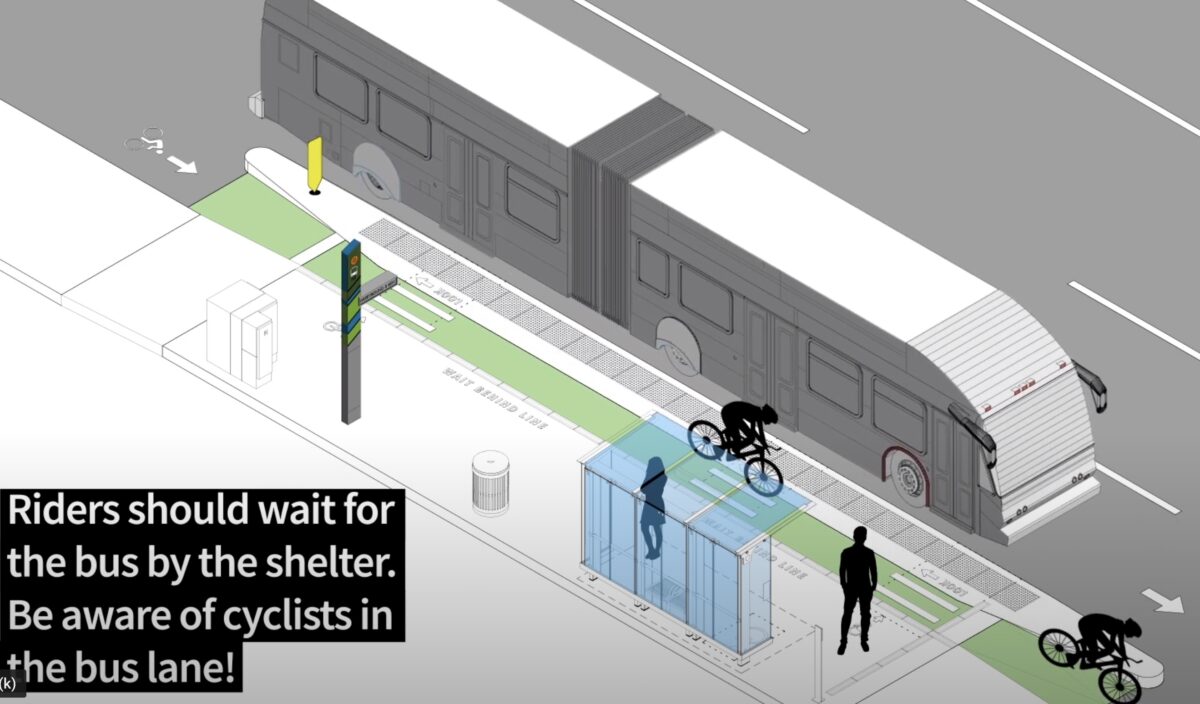 The result of three and-a-half years of design, planning, and hand-wringing at TriMet is finally on the ground and ready for use. The agency announced today that they’ve opened a new type of bus station as part of their Division Transit Project.

The $175 million project — which aims to bring faster, more reliable bus service between downtown Portland and Gresham — won’t fully open until fall of 2022. But two of TriMet’s “shared bicycle and pedestrian” station types have been opened early.

We’ve covered TriMet’s design process for years as they looked for the best solution to manage the demands of bus operators, bus passengers, bicycle riders — and most importantly, the project’s budget.

(The new station at SE Division and 130th. Photos by TriMet)

This design is one of four that will be used across the project’s 80+ station locations. It’s also the most common with 19 stations getting this treatment. The other station type that incorporates a bike lane (known as the “Island” design) is more expensive and puts the bicycle lane behind the station. It will be used at only three locations (east and westbound 82nd, and 122nd eastbound).

You can try the new station design starting Sunday April 4th at SE Division and 130th (eastbound) and 135th (westbound).


TriMet’s chief concern with the design has been how to mitigate the potential for collisions between bicycle and bus users. They’ve put out an educational video (above) and expect lots of signs and messages as these roll out. Really there’s nothing special about them. Just don’t be a jerk. If a bus is at the station, slow way down and wait for people to get on and off. You know, like normal compassionate human beings do in similar situations every day.

If you’re a fan of Copenhagen, you’ll appreciate that this type of bus station is used frequently there. I observed several of them during a trip there in 2013 and they worked well. 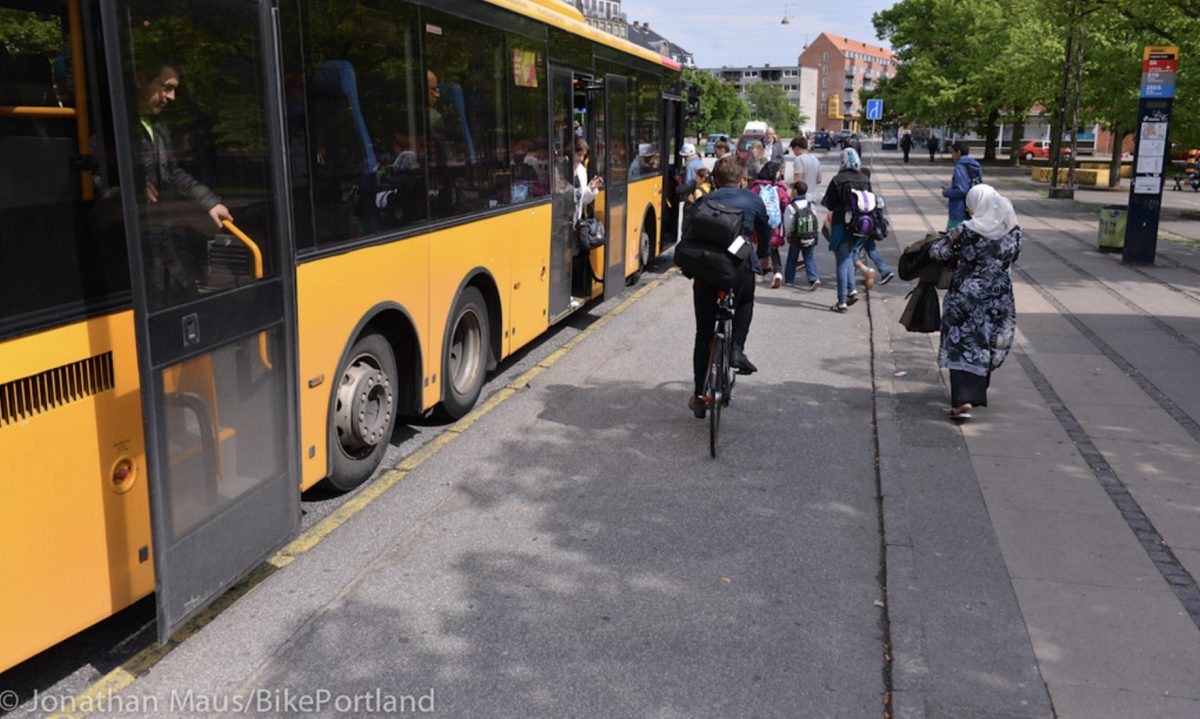 For a second I read this as the single bus stop costing $175 million. Lol!

Some people fought hard to preserve “free” car parking. Maybe it added to the cost or the speed of the bus?

Just noticed they didnt take the time to raise the curb another 4 inches for level boarding. Really?

My assumption is that they have to keep them at sidewalk height, otherwise you would have to step up onto the platform, which creates a trip hazard/ADA issue.

A new fleet of buses coming next year will fix this. https://trimet.org/division/#newbuses

JM, in your opinion, how does this stop compare to the tram stop on Lovejoy?

well the lovejoy thing is no longer there…. But to your point, it’s much better. Lovejoy stop forced bike riders to become sidewalk users, which is rarely if ever a good idea. This one makes the bike movement more direct which I like. But the proof will come when I actually use it and the station is busy.

So, if I’m reading this right, only 4 of these facilities will be in use at stations, and the other “stations” referenced to are not getting any enhancements and they will just be stops?
I couldn’t tell from the project website.
Sorry if I’m coming off a little dim, I couldn’t tell.
Thanks.

These are opening early. 19 out of the 80 or so stations will be like this once the project is complete in 2022. And another 3 stations will have a protected bike lane behind the stop.

Ah. Okay, I think I was just a little confused by the term “station” Thanks for the clarification.

So, no plans to redesign the major intersections? Not sure how this project is useful, other than to alleviate bus/bike conflict and for very short distances.

i’d say alleviating bus/bike conflict is quite a nice “other than”.

Sure, it’s nice, and certainly a good part of an overall redesign. But it doesn’t address the places where most people are injured and die. 122nd/Division, for example, has 6 people in cars, 5 people on bikes and 13 people walking reported since 2009. Without addressing intersections, the project isn’t going to have a big impact on VZ goals or attract any “interested but concerned” people on bikes.

preaching to the choir sir. this comment is better directed at TriMet and City Hall.

It’s a Trimet bus project not a PBOT safety project. I wouldn’t expect them to make other improvements other than maybe timing the lights so the busses can get through faster.

It makes sense, and yet would some cooperation with PBoT be warranted, given the nature of the project targets conflict between buses and cyclists? An analogy might be if every other street crossing were given ADA ramps, giving people in wheelchairs the freedom and safety to go one block, but no further.

No, there’s four types of designs, with 19 of this type.

Technically, since you’ll ride through this without the bus there most of the time, then this design should be superior to one which goes around the backside of the bus shelter IF waiting passengers don’t stand around in the bike lane.

Bus riders are usually craning their necks out while standing exactly there, to see if the bus is coming. Not that it is coming any quicker by looking every 30 seconds….

That bike lane in Copenhagen is completely different, for one its much wider and two, it’s on a far narrower street. Division is five car lanes wide and they still put in a 4-foot bike lane and no dedicated bus lane LOL