The Marine Drive Path is 75% complete. Here are the gaps that remain 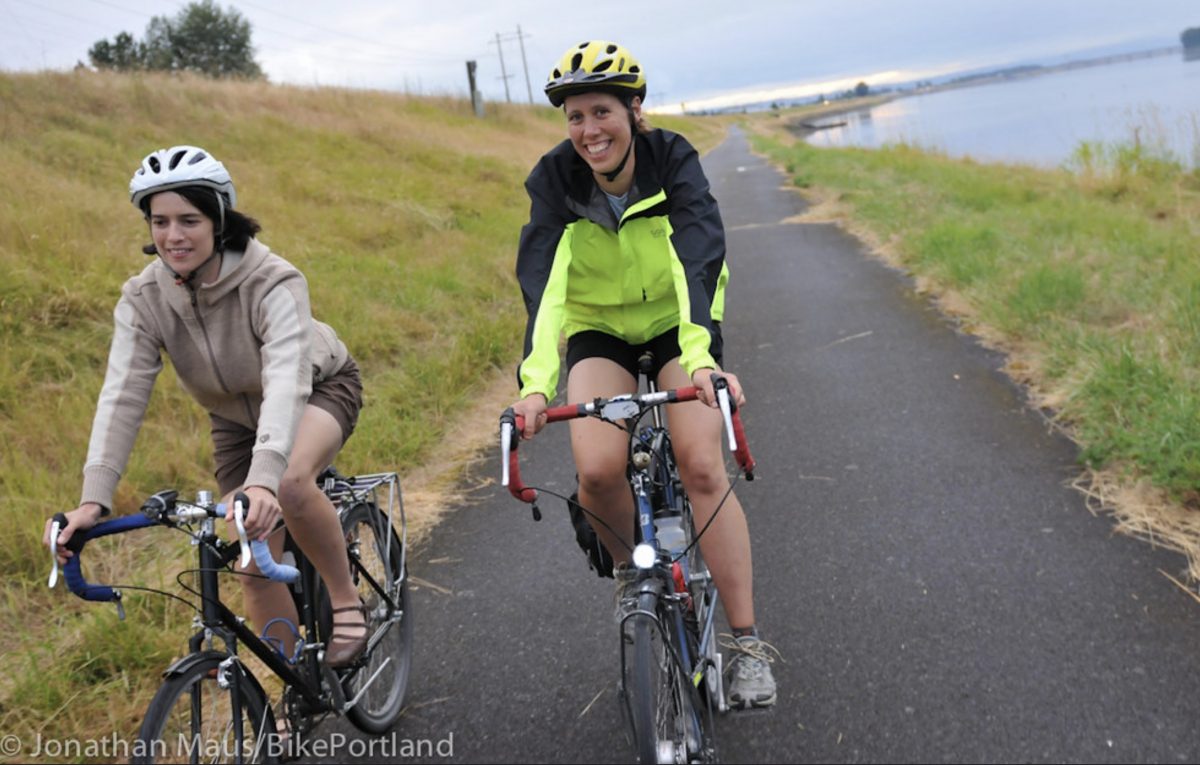 It’s easy to smile while riding on completed sections of the Marine Drive Path. Solid progress has been made recently and just six of its 23 miles remain.

The pandemic has reminded all of us how important it is to have safe network of off-street bike paths. After all, where would Portland’s collective mental health be today without being able to ride bikes free from the stress that some car users cause? 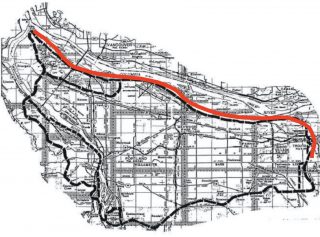 Some of the most popular low-stress places to ride a bike in Portland are along the 40-Mile Loop, a network of paved paths that circumnavigate Portland and that was first conceived by the Olmsted Brothers in 1903 as a way to connect the metro region’s parks. Unfortunately the “loop” part of the name is a bit of a misnomer because you can’t actually ride the entire thing. Last week, members of the 40-Mile Loop Land Trust held a meeting with Metro to provide an update on the remaining gaps. One of the stars of the presentation was the Marine Drive Path. (Note: I prefer “path” over more commonly used “trail,” because I think it’s less confusing to most people when describing paved facilities.)

The Marine Drive Path was first conceived in 1972 and is the region’s oldest path. When completed, it will run east-to-west for 23 miles between Kelley Point Park in north Portland to Depot Park in Troutdale. The path is extremely popular and is a key connection to I-205, several industrial corridors, and it’s the main gateway to the Columbia River Gorge. Currently about 17.5 miles are done and just under six miles remain to be paved and connected. 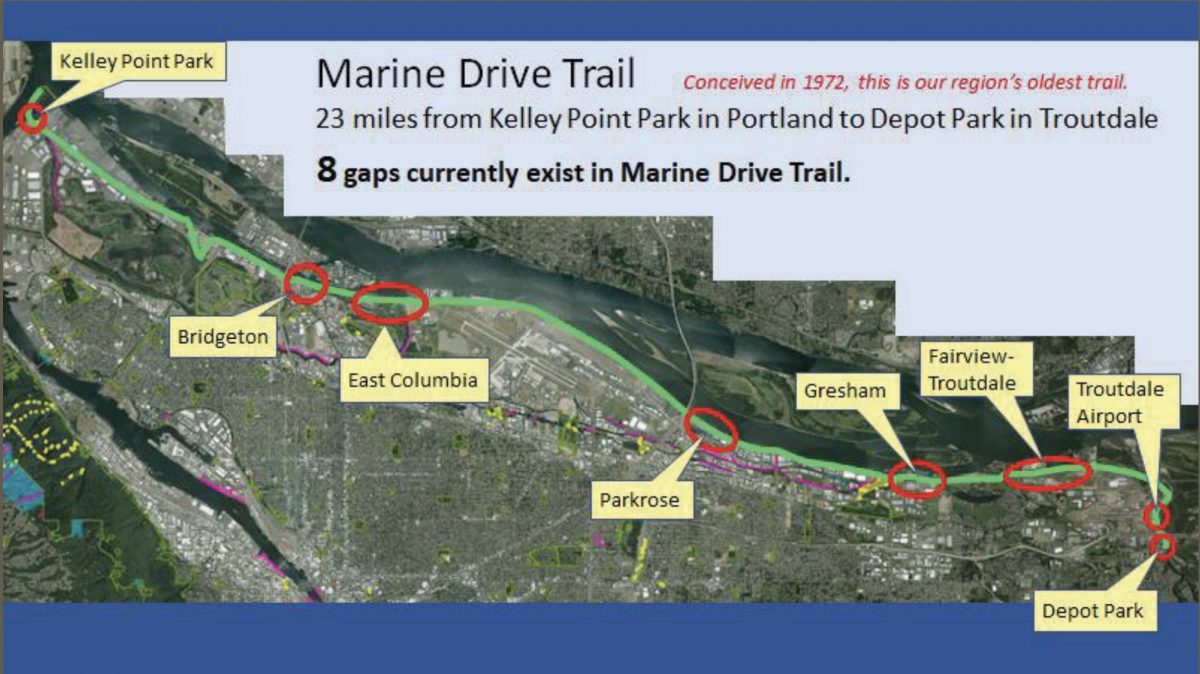 At the meeting last week, volunteers and agency leaders working with the 40-Mile Loop Land Trust detailed the remaining gaps. I’ll detail them below from west to east. 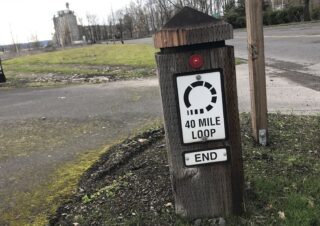 This one should be a no-brainer. Right now a paved path inside Kelley Point Park stops just a quarter-mile from another paved path that goes under North Lombard along the Columbia Slough. The path is engineered and all planned out. All that’s missing is funding. This gap is especially problematic because it leads many people to cross a section of N Marine Drive with poor sight lines that’s also a major freight corridor with relatively high traffic speeds. 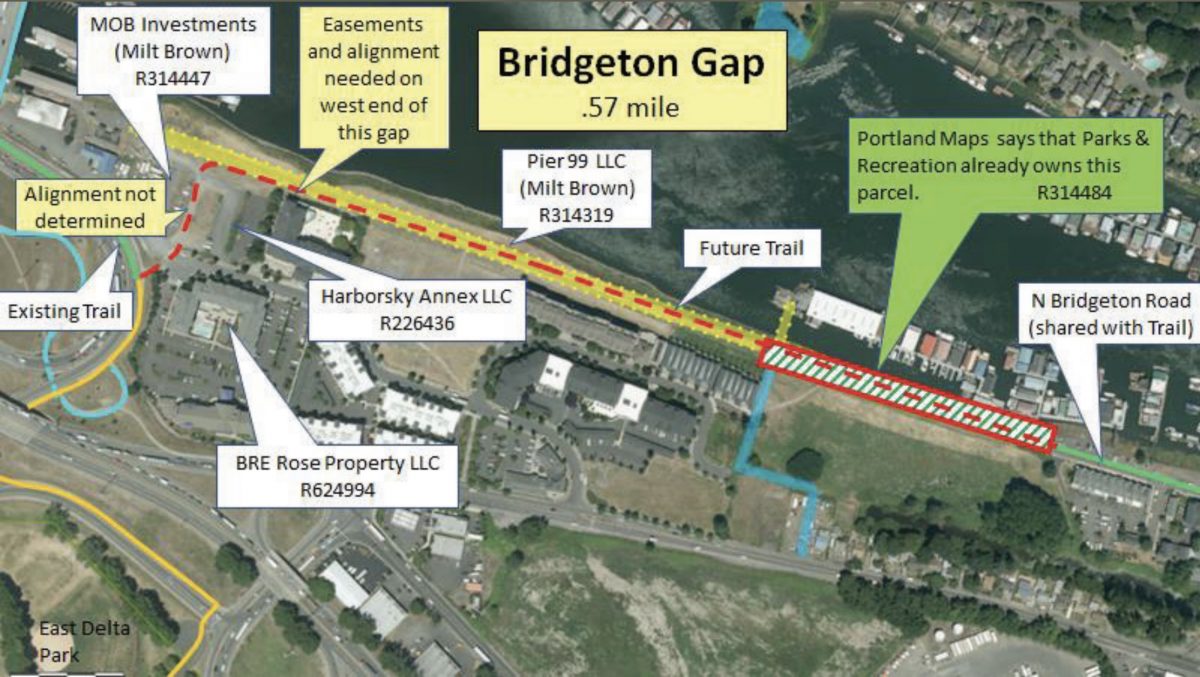 Bridgeton is a community along the Columbia River east of I-5 and north of Marine Drive. According to resident and 40-Mile Loop Land Trust volunteer Walter Valenta, the only reason a gap in the path remains through this section is due to one property owner who’s unwilling to sell an easement. “We’re stuck until we can get the right to build the trail,” he said. This gap forces riders onto Marine Drive where there’s very little space to operate. This is one of the most harrowing sections of the route. 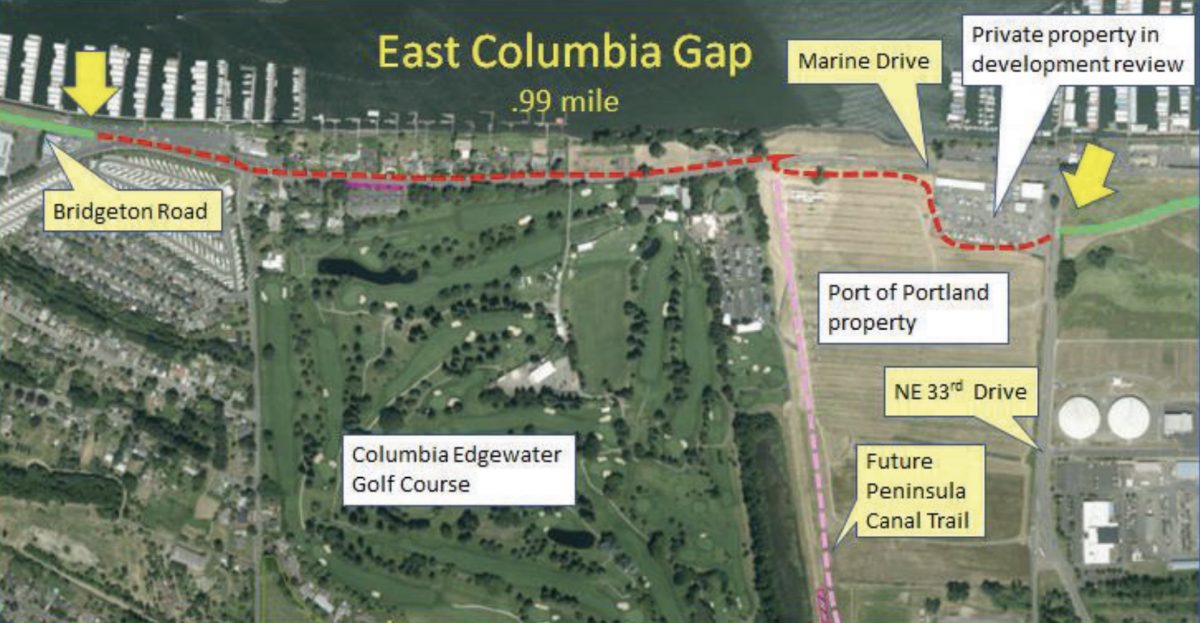 This gap, from about 13th Avenue to 33rd (adjacent to Columbia Edgewater Country Club), is currently in flux. Possible development of the Port of Portland property on the east end gives advocates hope and recent work from PBOT on the intersection with 33rd has created more urgency as well. Parts of this gap could be a candidate for funding through a federal program to improve the levee that it sits on. The western segment along the country club will be more challenging. 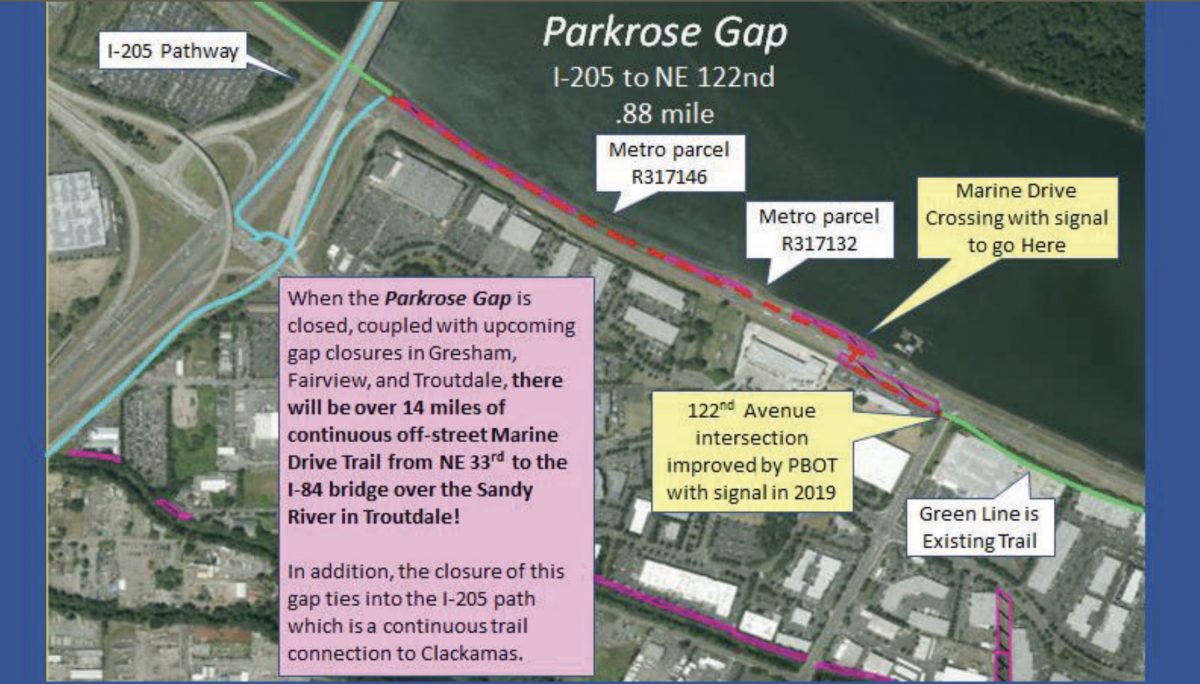 Starting at I-205 and heading east to 122nd, this gap has been made a bit easier to swallow thanks to wider bike lanes recently installed by PBOT. A new signal at 122nd has also helped calm drivers down a bit. But a path would be much safer for more types of riders. The plan is to keep continue the path on the north side of Marine Drive along the river and then build a new crossing just west of 122nd. The good news is easements have been secure and all that’s needed is funding. 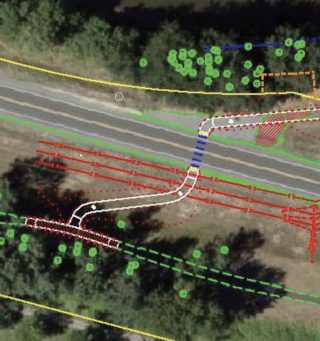 Metro is taking the lead to close the gap from NE 185th to Interlachen Lane (Blue Lake Park). They also plan to rebuild a bumpy and cracked section of existing path that starts at Blue Lake Road and goes 0.6 miles to NE 223rd. Metro planner Mel Huie says they’ve got $2.85 million set aside for the projects and they’ll be completed by spring of 2023. Huie also shared that the Fairview-Troutdale project (below) will include a new signalized crossing of Marine Drive from Metro’s path near Blue Lake Park (at right). 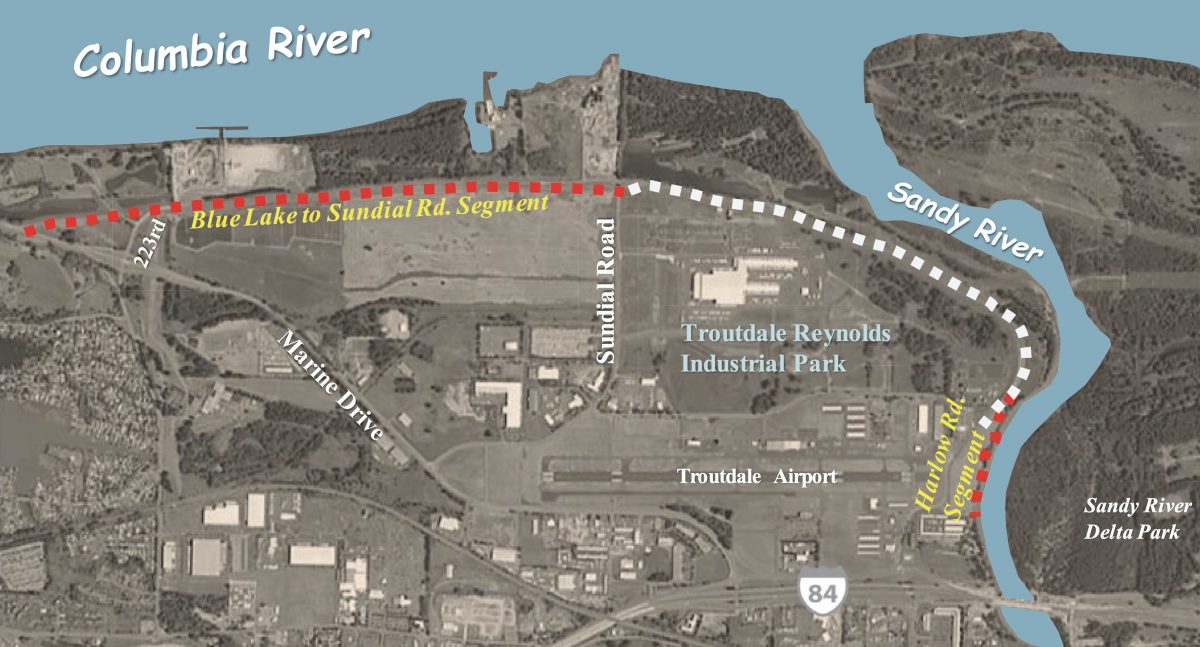 We reported on this exciting project back in 2016. It will pave a new, 10-foot wide path from a new crossing at NE 223rd that will follow the Columbia River to an existing path path that starts just west of the Sandy River Delta area. The Port of Portland and City of Troutdale will also build another piece of path along the river to connect to the existing path under I-84 north of Troutdale via Harlow Road. When complete, you’ll be able to completely avoid the stressful I-84 ramps and truck stop section and remain on a low-stress path to connect to the Historic Columbia River Highway. Design on this project was completed in 2019 and a rep for the project said construction will start in fall 2021. 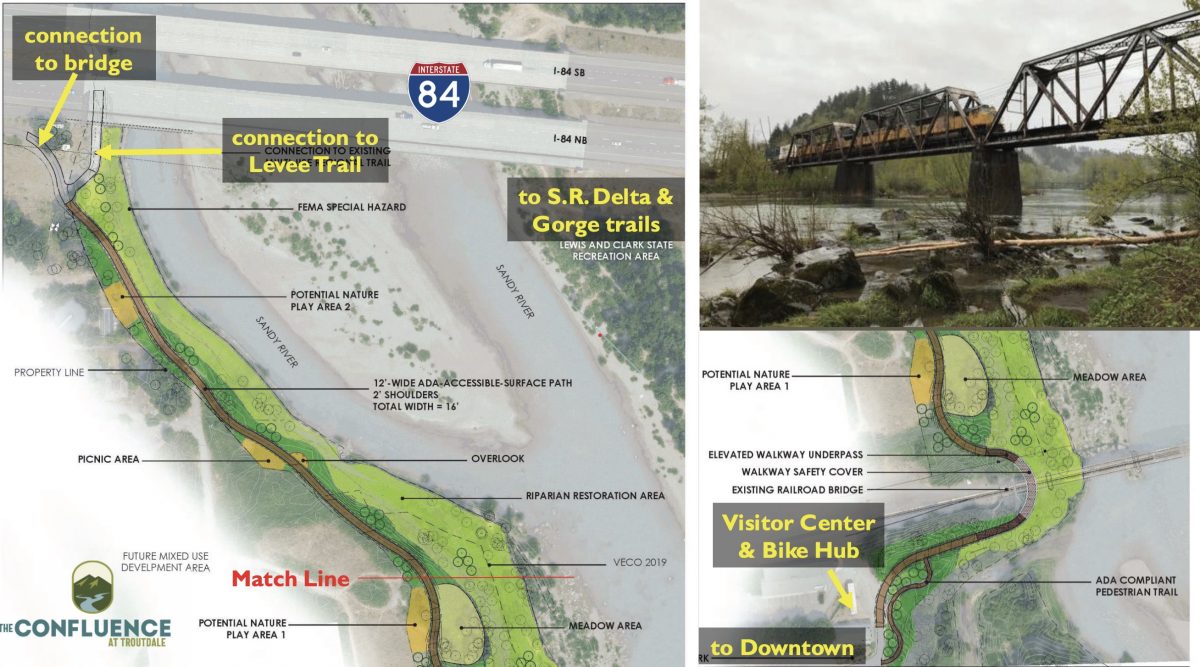 The City of Troutdale is taking the lead on this final piece of the path that will eventually be not just the eastern end of the Marine Drive path, but will also serve as the western hub of the Historic Columbia River Highway State Trail (which is getting very close to closing its final gaps too). From last week’s meeting it sounds like Troutdale has an exciting plan underway. Troutdale Community Development Director Chris Damgen said a new, 12-foot wide path will connect to the existing I-84 bridge path and head south (on the west side of the Sandy River) along a currently undeveloped parcel. The path will go along a high embankment with “really spectacular views” of the Sandy River Canyon. It will go under the railroad trestle and then cross the Historic Highway at Glen Otto Park. It’s scheduled for completion within the next 2-3 years.

The 40-Mile Loop Master Plan was published in 1983, that means it will celebrate its big 4-0 in just two short years. Hopefully by that time we can have a big — gap-free — ride around the entire loop! Stay tuned for news and action alerts to help this effort get across the finish line.

Detailed local coverage like this is why I love Bikeportland.org.

Thanks 40-mi land trust. Appreciate all your work.

This was my quick, get out of the house ride in April/May. Once things picked up again, so did the traffic, so I started going on more MTB rides. I would ride the segment from 122nd to Troutdale. Some of the east-bound path sections are nice, others are kinda hazardous with roots/mud/etc., so I’d just stay on the road. Good to hear they’re repairing some parts. Also, the blue lake crossing looks great. There’s already a little path in the grass there, so you can go north from the path up to the levee that connects you to 223rd. That was my favorite part, the unpaved section along the levee from the crossing all the way to sundial road. Some of the airport dirt was nice too. Coming back I’d usually just stay on the road from the end of that sundial-BL levee to the next section on the north side at ~176th-ish. It would be great if CalPortland could keep their gravel in their lot…

I ride to KPP at least once a week, look forward to the day when that gap is closed, and we no longer have to cross in the path of freight traffic. It’s certainly improved over the years, and I like that there is the crossing with the paved section on the north side before the entrance. But finishing the under bridge section would be the icing on the…

An excellent path is worth nothing if it isn’t complete. Completing the gaps here and in other paths around the metro area (looking in particular at the US 26 path’s giant gap between the zoo and the reservoir) should be near the top of the priorities list.

I love the pic!

I’m most interested in the Marine Dr. gap W. of NE 33rd. The Land Trust slideshow doesn’t have much of anything about it, but I found this about the Peninsula Canal Trail being built to not disturb turtles: http://efiles.portlandoregon.gov/Record/9649941/File/Document/

“[The Bridgeton] gap forces riders onto Marine Drive where there’s very little space to operate. This is one of the most harrowing sections of the route.” I go through Bridgeton, it’s not harrowing. I’m all for closing the gap, though.

That problem is easily overcome through condemnation.

I know the City of Portland is normally reluctant to condemn land, and I generally agree that condemnation should be used only a last resort. Since there are still other unfinished segments and no funding for the gap, it makes sense to leave it be for now.

But when all other segments are complete, the final segment has been funded, and a single property owner is all that stands in the way of completing a 23-mile path … that will be the proper time for the City to force a sale.

I “attended” the meeting as a member of the npGreenway board. The North Portland Willamette Greenway Trail (or MUP) is part of the 40 Mile Loop, and what jumped out at me was the fact that it is almost all GAP! only 7% built. Columbia Blvd. Bridge/St Johns Prairie projects will almost triple the numbers by that measure. But it feels like NPWGT is the 40 Mile Loop “stepchild.” Note that it is not on that original map from 1983! It has a riverside trail on the west side…pretty impossible from old Terminal One north.

In our update on the NPWGT later in this meeting, we failed to mention either Willamette Cove or Baltimore Woods, both huge, but difficult opportunities that impact minority, low income folks more than most of the Loop. I hope BikePortland will take a closer look at both of those in the near future.

I think the other point we failed to make is that while we are all for access to “Nature,” as the planet warms, we need better, safer access to jobs via bike, transit and on foot.

Is the path safe, or does it pass thru thug-infested locations, or thru homeless camps like the Springwater path? Does it pass thru isolated locations where an adjacent road might allow bad guys to hide and ambush people (then have an escape route via the road)?

Vote Up0Vote Down  Reply
| View Replies (1)
« Portland’s fantastic fall colors are a respite in anxious times
Coming to a bike lane near you: A strawberry, a fish, and a chicken on a bike »