I can’t believe I’m typing this, but only one section — a mere 1.6 miles! — of the 73-mile Historic Columbia River Highway project remains unfunded.

Yesterday the Oregon Department of Transportation released an online open house to share more about the three remaining segments of the ambitious project that seeks to re-restore the grandeur of the Historic Highway and make it whole after it was partially destroyed and abandoned when Interstate 84 was built. Currently 68 of the 73 miles between Troutdale and The Dalles are rideable and that includes 13 miles of carfree paved paths.

Of the three segments that remain, two of them already and are fully funded and ready to build. From Viento State Park east to just beyond Mitchell Point, ODOT has excited plans in store. 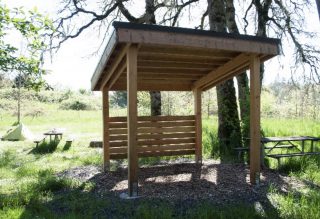 At Viento State Park, ODOT plans to build a new gravel trail and hiker/biker campsites. According to their National Scenic Area permit, a new hiker/biker camping area at the southern section of the park will include eight new gravel tent pads specifically for visitors without cars. These sites will include “bike pods” and four of the eight sites will have three-sided shelters. As we reported in 2014, bike pods can include electrical outlets, bike repair stands, and gear lockers.

The additions to Viento State Park will open up exciting bike-camping possibilities. The other popular bike-camping spot in the Gorge is Ainsworth State Park, which is about 35 miles east of downtown Portland. The new campsites at Viento would be another 22 miles east.

ODOT plans to begin construction on the Viento to Mitchell Point segment in 2022.

ODOT has also released new photos of a new carfree tunnel through Mitchell Point that will break ground early next year. Mitchell Point was an iconic section of the Historic Highway when it first built in 1915. It was completely destroyed in 1966 when crews blasted the hillside to widen I-84. The new design will recreate the five arched windows the tunnel was famous for and the tunnel itself will be 655-feet long. ODOT expects the project to be completed by 2023.

The final, 1.6-mile section from Ruthton Point to Hood River is still under design and ODOT is looking for $35-40 million to get it built.

Learn more at HistoricHighway.org and check out the open house for more information.

Saw a peloton on I-84 my last trip out East. Jesus. Can’t close that Ruthton Pt gap soon enough. ODOT’s statewide mandate priority should be to fill these gaps, not expand freeways.

And they seem to be doing a pretty good job of it. Kudos to ODOT on this one; funding doesn’t just come out of thin air.

Seriously. I passed a group near there last weekend as well. I moved over to the next lane, but most drivers are not that courteous. It’s crazy that ODOT would let this situation persist for so long.

Are there any plans to connect Troutdale and Bridal Veil with an MUP at some point? I don’t mind the climb up to Corbett, but the locals out there have gotten so hostile towards cyclists over the past few years. It would also be nice to have access to Rooster Rock SP.

Adding a few hundred feet of extra lane to one segment of the #1 worst bottleneck on the west coast hardly qualifies as “expanding freeways”. Another swing and a miss for those who want to punish the working class with tolls and artificially long commutes. Your classism is shining through, loud and clear.

At half a billion dollars, that’s some expensive “few extra hundred feet” of lanes.

Who is paying for it?

Willamette Week reported that it’s now an estimated $795 million. If ODOT confirms that figure, I will begin to round up.

As opposed to “naturally” long commutes? Even ODOT admits the RQ freeway project will have no effect on congestion. There’s a lot of evidence from cities around the world who have congestion pricing. It works consistently in improving and spreading out commute times.

Perhaps it’s a pipe dream, but it would be so, so amazing if there was a path on low-traffic roads or separated multi-use paths running along the entirety of historic US 30 from Portland to Boise. What an amazing bikepacking trip that would be, most of it already exists, and there’s really not that many sections left that would be too difficult to engineer. A few miles in the Grande Ronde River and Burnt River Canyons would be about the only two tough sections.

Here is a quick map I made showing the existing segments all the way from Hood River to Payette. Apart from one big 50-mile gap there’s really not too much left!

This is great news! Not only adding the trail sections, but a hiker/biker camp at Viento will make weekend rides to Hood River so much easier. No more booking campsites months in advance, hoping the Oregon weather will comply. The hiker/biker sites should go up quick, any chance we will see those next summer?

I’ve done a couple weekend rides out to Viento, and aside from the train noise, it’s a great spot. Also helpful that it’s only an 8 mile ride into Hood River for food and drinks, so you don’t have to pack too heavily.

Would be nice if they could do something about the stair section before Eagle Creek also..

A thousand times this. That stair is not ADA-compliant, was known to be non-compliant by ODOT when it was built, and is a substantial obstacle not only to adaptive cyclists like myself (you try moving a 40-pound recumbent trike up or down those stairs), but also to families and cycling tourists.

ODOT is working to engineer a solution to this. I’m on the citizen advisory board to ODOT for this trail, and we’re all in agreement the trail isn’t complete until this section is fixed. I’m sure Jonathan will write about it when ODOT floats a proposal.

Hey Art, if this is the former HR Mayor I know, great that you’re involved! I was thinking it makes sense to clue in Shelly Zeman and Ricky Bobby and other HR taxi people once Viento opens to cyclists since that last connection will probably be difficult to solve.

Also hope there is a memorial to Ellen Dittebrandt, and reach me on LinkedIn if fundraising for that comes up.

Can the park designers add some ‘hennessy hammock’ approved poles for hammock camping…these are very low impact when planned vs. using trees frequently.

And why gravel camping pads…sure it drains well but I never find them comfortable and they wear out my ground cloth. So can they just make them all elevated platforms?

I’ve never ventured on the Historic Columbia River Highway via bike, but I have walked it and found it incredibly dangerous/uncomfortable. Do folks think it’s safe to ride alone or would I need a friend or two for safety/comfort?

What did you find dangerous and uncomfortable about a scenic separated cycle and walking path? I have spend some time in the Gorge working and recreating on the historic highway, and I can’t imagine what danger you are referring to.

If you are worried about your personal safety you best bet to improve your chance of a longer healthier life is – 1) Stop or don’t smoking, 2) cycle, walk run to improve cardiac health, 3) drive less and always follow the rules of the road, and special for 2020 4) wash your hands and wear a mask in public.

I could be wrong but I believe JR is referring to the waterfall corridor portion, where car traffic is abundant, many drivers are performing dangerous behaviors, and backups of up to a mile can be commonplace on weekends.

Hey JR, in my experience it depends on the season and time of day. I’ve biked to Ainsworth Campground with 3 others before in May/June, and in the later afternoon/evening I found it not crowded and super fun to ride. The next morning when we left was a Saturday and it was crowded, with several drivers passing very closely on the narrower uphill sections. That sucked a lot. Didn’t have any trouble around Corbett but the ride into Troutdale was stressful because of big trucks speeding uphill and no bike lanes. I would personally ride it again by myself but I’d make sure to time it when there is the least amount of vehicle traffic, like an off-season weekday early in the AM or later in the PM. Having my lights on and a rearview mirror helped me feel a bit more secure while riding. It was really was a special experience to coast down the hills and past the waterfalls on my bike, with some spectacular views of the Gorge.

Lots of spending… Extravagant studies… Frivolous time planning… Turns out gorgeous we won’t care… Columbia River Gorge cities and friends of the gorge continue to strive their own propaganda and belittle others and other ideas. I.e. casino, nestle waters, Cascade Locks potential. Glad I’m gone from that back woods behavior.

It’s a gorge thing – quite political, and lotsa NIMBY. The trail is awesome, though, and many folks don’t realize there is disaster planning (alternative routing) aspect to it also.

I could see this route becoming the Donau cycle route of North America. However, it is not and was never intended to be suitable for the peloton. It is a scenic mixed use path intended to provide an opportunity for everyone to enjoy self propelled travel.

You can find details on Viento State Park’s website I think. There are various levels of service for different sites, and you may want to comment on the open house site if there’s something you desire for the bike packing sites (in planning still).